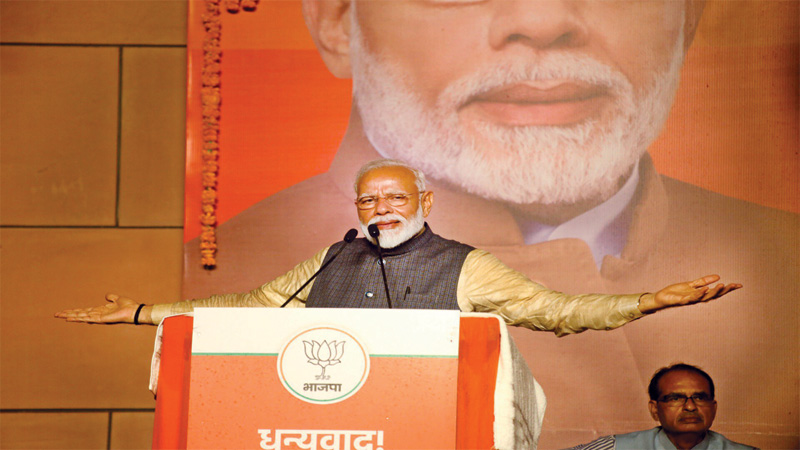 Following the resounding victory in the Lok Sabha elections, addressing the nation from the Bharatiya Janata Party national headquarters in New Delhi PM Shri Narendra Modi said the 130 crore citizens of the country stood “for India” and voted “for India.” Thousands of Party Karyakartas were present at the venue who had waited amid a steady drizzle to listen to him and were cheering, clapping, whistling and chanting “Modi, Modi, Modi”, which reverberated the thrilling atmosphere of BJP headquarters after it became evident that BJP led NDA was on its way to an unprecedented and historic electoral triumph.

Speaking to the supporters Shri Modi appealed to party workers to show humility, take everyone along and resolved not to take any step out of ill intent.
Shri Modi said he might at times commit a mistake but he will not do anything with bad intent. He also advised workers and supporters to show restraint. 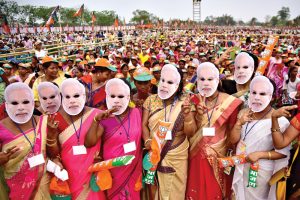 “We have to move ahead. We have to take everyone with us, even our opponents. We have to work for the benefit of the country,” he said. He urged everyone to forget the rancor of the bitter and often nasty campaign. “What’s past is past,” he said.
Shri Narendra Modi also hinted at his humble beginnings and his devotion to the people of the country. “You have filled this fakir’s bag with a lot of hope. All your hopes, dreams, ambitions are dependent on it,” he said.

He said, “I am committed to devote every moment of my time and every fiber of my being for the people of India”.

Decrying those who have used caste divisions for electoral benefits, the PM said the country will now have only two castes — the poor and those who want to alleviate poverty. He said his government’s responsibility would be to help not only the poor, but also those who want to lift people out of poverty. Voters have dealt a huge blow to the parties doing politics in the names of castes, he said.

“People are chanting Modi, Modi. But this is not a victory of Modi, it is the victory of people who are desperate for honesty in the system,” he said.

The PM said the victory was of toiling farmers who struggle to feed the nation, of those who now live in proper houses, of the middle class that follows the rules, pays taxes, but wondered if his taxes were being used for the benefit of the country. In the last five years, people have realized that the money they are contributing in taxes has been put to nation-building, he said.

“I will not do anything for myself. I will devote every moment of my time and every fiber of my being for my countrymen,” the PM said. “Whenever you judge me, judge me on these three parameters. If I fall short on these, curse me. But I assure my countrymen that what I have said in public I will do my best to fulfill,” he said.
The PM said BJP led NDA government is committed to the spirit of federalism, follow the constitution and take everyone along as the country is run with consensus. Shri Modi said the 2019 election was a rare one where corruption and inflation were not planks on which the opposition fought. “This was the first one in which any political party could not level even one charge of corruption,” he said.

He said the verdict has vindicated his view that it was not parties but people who fought this election. He likened the elections with the Mahabharata. He said Krishna was asked after the war which side he supported and he answered that he stood for Hastinapur, and people have spoken in the elections that they stood for India.

The PM said this win was of people who were pining for an honest government, a victory of those who had for the last 70 years lacked even the most basic amenities, like toilets. He said his government was committed to providing housing for all by 2022.

Shri Modi reminded people that the electoral win has come at a time when the country is celebrating 150 years of Mahatma Gandhi’s birth, and appealed to the people to treat the next five years as the period between 1942 and 47.