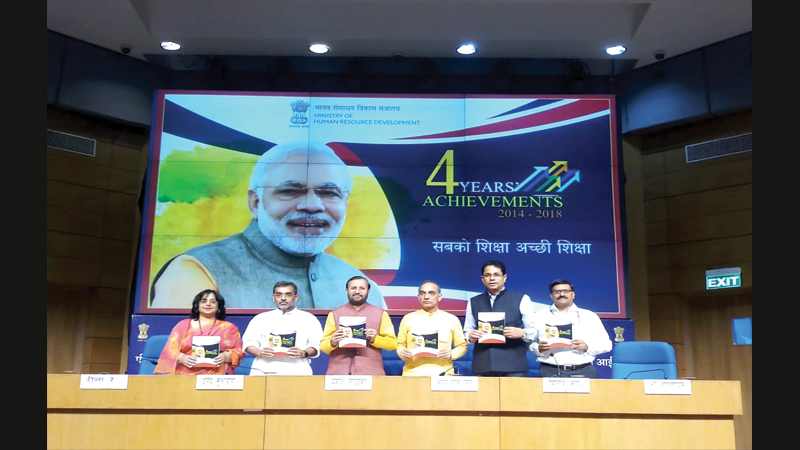 The Union Human Resources Development Minister, Shri Prakash Javadekar has informed that 33 new initiatives have been taken by the Government in the last four years to strengthen the education system. Addressing a Press Conference at New Delhi on June 18 on the achievements of four years of HRD Ministry, Shri Javadekar said that revolutionary changes have been made to provide affordable and quality education for all. The Minister said that under the visionary leadership of Prime Minister, Shri Narendra Modi transformational changes have taken place in the education sector bringing in accessibility, quality, accountability, equity & affordability and have also given a tremendous push to research and innovation. Dr. Satya Pal Singh, Minister of State for HRD, Department of Higher Education and Shri Upendra Kushwaha, Minister of State for HRD, Department of School Education and Literacy were also present at the press conference.

Highlighting the new initiative on learning outcomes, Shri Javadekar said that Learning Outcomes benchmark student’s capabilities to be achieved in each subject and class every year. This will bring in accountability of schools, teachers and students, as well as parents will improve the quality of school education. The Minister disclosed that 103 new Kendriya Vidyalayas and 62 new Navodaya Vidyalayas have been opened during the last four years.

Terming the National Assessment Survey as the World’s largest National Assessment Survey, Shri Javadekar said 22 lakh students of class 3, 5 and 8 & 15 lakh students of class 10 were assessed in this survey. He further said that education profile of every district and state has been shared with Chief Ministers, MPs & officials.

Referring about change in no-detention policy, HRD Minister said The Right of Children to Free and Compulsory Education (Amendment) Bill, 2017 is already tabled in Parliament, and as per proposed Amendment, states will hold examination of students in class 5 and 8. If a student fails in second attempt, he/she can be detained. This will ensure a continued study by the students and improve their performance. Focusing on teachers’ education, he said that 14 lakh unqualified D.El.Ed teachers are doing course on “Swayam” platform and 1st year exam was successfully conducted.

Shri Prakash Javadekar said that the Government has taken up the rationalisation of syllabus and 37 thousand people have given their suggestions to reduce the curriculum. He said that more time is needed to focus on value education, experiential learning, life skills education, creative skills and physical education. He said that Budget will increase by increased by 20- percent in each year under the Samagra Shiksha. Shri Javadekar said every day 95 million students are served fresh cooked food at 11.4 lakh schools at the cost of Rs 17,000 crores per year. Union government is further strengthening the program by granting more funds for cooking, transport cost and also for fortification of food.

The Minister said that on the Higher Education front, 141 Universities, 14 IIITs, 7 IIMs, 7 IITs and 1 NIT have been opened during the last four years. He said Higher Education Financing Agency- HEFA will provide Rs 1,00,000 crore in next 4 years. This is implemented under the initiative of “Revitalising Infrastructure & Systems in Education (RISE) by 2022. On the autonomy of Higher Education Institutions, he said IIM Bill has been passed, while Graded Autonomy has been granted to more than 60 universities.

He said that under the digital initiative, SWAYAM portal has been launched with 1,032 Courses by the best faculty. 2 million users are benefiting with this Interactive learning program. Online Library with 17 million digital books & journals are available under the National Digital Library. Wi-Fi facility has been provided to all central universities. Nearly 400 university campuses and 10,000 colleges are now Wi-Fi enabled.