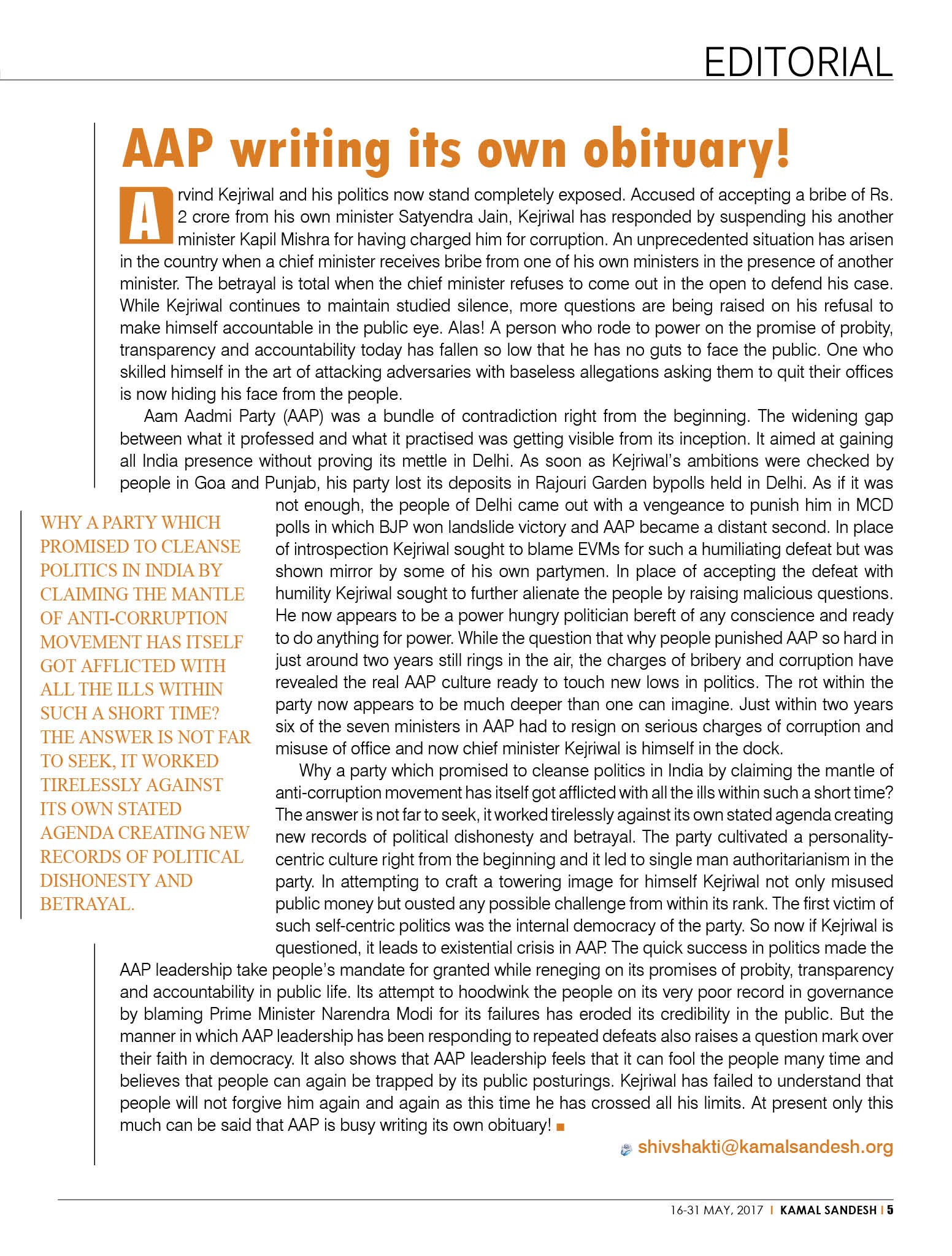 Arvind Kejriwal and his politics now stand completely exposed. Accused of accepting a bribe of Rs. 2 crore from his own minister Satyendra Jain, Kejriwal has responded by suspending his another minister Kapil Mishra for having charged him for corruption. An unprecedented situation has arisen in the country when a chief minister receives bribe from one of his own ministers in the presence of another minister. The betrayal is total when the chief minister refuses to come out in the open to defend his case. While Kejriwal continues to maintain studied silence, more questions are being raised on his refusal to make himself accountable in the public eye. Alas! A person who rode to power on the promise of probity, transparency and accountability today has fallen so low that he has no guts to face the public. One who skilled himself in the art of attacking adversaries with baseless allegations asking them to quit their offices is now hiding his face from the people.

Aam Aadmi Party (AAP) was a bundle of contradiction right from the beginning. The widening gap between what it professed and what it practised was getting visible from its inception. It aimed at gaining all India presence without proving its mettle in Delhi. As soon as Kejriwal’s ambitions were checked by people in Goa and Punjab, his party lost its deposits in Rajouri Garden bypolls held in Delhi. As if it was not enough, the people of Delhi came out with a vengeance to punish him in MCD polls in which BJP won landslide victory and AAP became a distant second. In place of introspection Kejriwal sought to blame EVMs for such a humiliating defeat but was shown mirror by some of his own partymen. In place of accepting the defeat with humility Kejriwal sought to further alienate the people by raising malicious questions. He now appears to be a power hungry politician bereft of any conscience and ready to do anything for power. While the question that why people punished AAP so hard in just around two years still rings in the air, the charges of bribery and corruption have revealed the real AAP culture ready to touch new lows in politics. The rot within the party now appears to be much deeper than one can imagine. Just within two years six of the seven ministers in AAP had to resign on serious charges of corruption and misuse of office and now chief minister Kejriwal is himself in the dock.

Why a party which promised to cleanse politics in India by claiming the mantle of anti-corruption movement has itself got afflicted with all the ills within such a short time? The answer is not far to seek, it worked tirelessly against its own stated agenda creating new records of political dishonesty and betrayal. The party cultivated a personality-centric culture right from the beginning and it led to single man authoritarianism in the party. In attempting to craft a towering image for himself Kejriwal not only misused public money but ousted any possible challenge from within its rank. The first victim of such self-centric politics was the internal democracy of the party. So now if Kejriwal is questioned, it leads to existential crisis in AAP. The quick success in politics made the AAP leadership take people’s mandate for granted while reneging on its promises of probity, transparency and accountability in public life. Its attempt to hoodwink the people on its very poor record in governance by blaming Prime Minister Narendra Modi for its failures has eroded its credibility in the public. But the manner in which AAP leadership has been responding to repeated defeats also raises a question mark over their faith in democracy. It also shows that AAP leadership feels that it can fool the people many time and believes that people can again be trapped by its public posturings. Kejriwal has failed to understand that people will not forgive him again and again as this time he has crossed all his limits. At present only this much can be said that AAP is busy writing its own obituary!