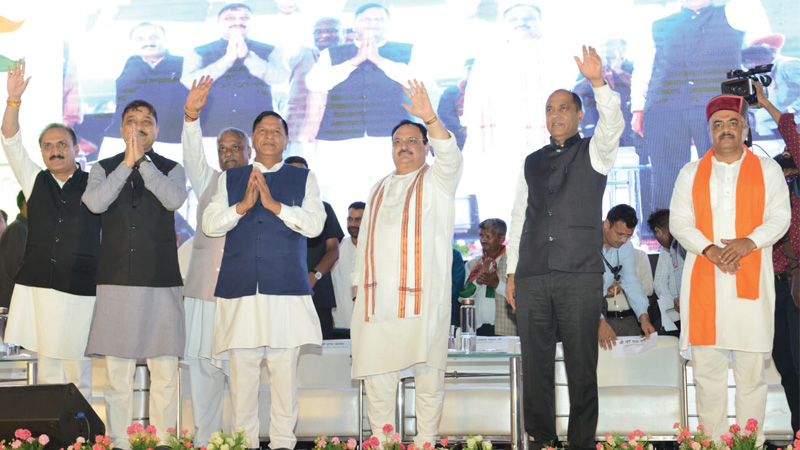 The Bharatiya Janata Party National President Shri JP Nadda on 20 August, 2022 began his two days Pravas to Himachal Pradesh with offering prayers at Gurudwara Paonta Sahib in the Sirmaur district. On the first day of his visit, Shri Nadda addressed two huge public meetings – ‘Pragatisheel Himachal: Sthapna ke 75 Varsh’- in Sirmour district of Himachal Pradesh as the state is celebrating 75 years of its formation. Subsequently, he addressed the second public meeting at Chogan Maidan in Nahan. He also held meetings with the leaders of the state unit to deliberate on the strategy for the assembly elections scheduled to be held later this year.

Only aim is to make a developed and self reliant India


He said that Prime Minister Shri Narendra Modi in his address to the nation on August 15 appealed to all the citizens to take FIVE pledges to make India of 2047 – a developed India, free from all thoughts of slavery, sense of pride for our heritage, unity and integrity, and dutifully do our duty and service to the nation – we all need to follow this with full honesty and integrity. If all citizens pledge to remain united then nothing is impossible. Our enemies will try to divide us on the lines of religion, caste and region. They will conspire to make our nation and state weak. But we all have to stay united. Our only aim and mission is to make a developed and self reliant India by 2047, he added.

He said all the damages to our crops due to rains, floods and natural disasters will be taken care by the Bharatiya Janata Party government in the state. We will take care of our farmers.

The BJP National President said demand of separate ADJ court in Paonta Sahib from the people of this region will soon be fulfilled by the Jairam Thakur government in Himachal Pradesh. Soon a court will open here. We will also take a decision soon on the issue of giving tribal status to Hatti.

He further said India used to be dependent on imports for its need for defence sector, but under the leadership and guidance of Prime Minister Shri Narendra Modi today, India has emerged as ‘Export Hub’. Our defence exports have increased by six times. Our agriculture budget has also increased four times under the Narendra Modi Government.

The Congress party and its leaders should remember that they had looted public money and people were cheated and fooled, they had left people unemployed. So there is no hope for the Congress party. The Congress led UPA government not only scrapped the special status given to Himachal Pradesh, it also withdrew the industrial package given by the then Atal Bihari Vajpayee government for 10 years in just 7 years. Prime Minister Shri Narendra Modi has once again restored the special status to Himachal Pradesh.

In 2002 the foundation of Atal Tunnel was laid. During the Congress party led UPA government no work was done for 10 years. Shri Atal Bihari Vajpayee used to say that the foundation stone of this tunnel was like a stone kept on my heart. But this dream of Shri Atal ji was fulfilled by Prime Minister Shri Narendra Modi.

The Congress party government kept the Renuka dam project in limbo. It is the Narendra Modi Government which has released Rs 7000 crore and the work has again started in Renuka dam project. Once this project is completed 40 MW of electricity will be generated from this project. Today, Himachal Pradesh has been established as “smoke free state”. MoUs worth Rs 23000 crores for industrial development have been signed while MoUs worth Rs 15000 crores for development of tourism sector in Himachal Pradesh have also been signed.

In Himachal Pradesh AIIMS has been constructed at Bilaspur with the cost of Rs 13,000 crores while a medical college has also come up at Nahan with an expenditure of Rs 300 crores. Also 7 ropeway projects which are over 57 kms long and worth Rs 32,000 crores are currently under construction in Himachal Pradesh.

Entire nation including the people of Himachal Pradesh trust and have faith only on the Bharatiya Janata Party. What are the achievements of Congress party? It was Bofors, CWG scam, 2G and 4G scams, Augusta Westland scam, submarine scam, and the list is endless. When our brave soldiers carry out surgical strikes against terrorists and does cross border air strikes, the Congress party and its leaders ask for proof of these operations from our valiant soldiers. I appeal to the people of Himachal Pradesh to give proof to these leaders in November.