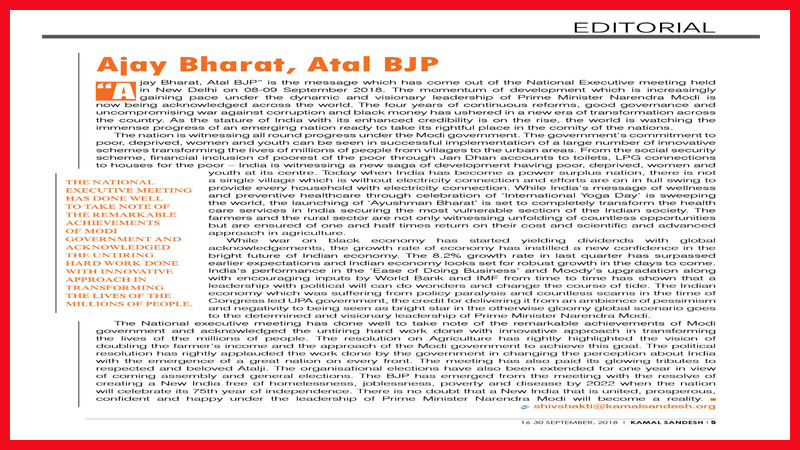 “Aay Bharat, Atal BJP” is the message which has come out of the National Executive meeting held in New Delhi on 08-09 September 2018. The momentum of development which is increasingly gaining pace under the dynamic and visionary leadership of Prime Minister Narendra Modi is now being acknowledged across the world. The four years of continuous reforms, good governance and uncompromising war against corruption and black money has ushered in a new era of transformation across the country. As the stature of India with its enhanced credibility is on the rise, the world is watching the immense progress of an emerging nation ready to take its rightful place in the comity of the nations.

The nation is witnessing all round progress under the Modi government. The government’s commitment to poor, deprived, women and youth can be seen in successful implementation of a large number of innovative schemes transforming the lives of millions of people from villages to the urban areas. From the social security scheme, financial inclusion of poorest of the poor through Jan Dhan accounts to toilets, LPG connections to houses for the poor – India is witnessing a new saga of development having poor, deprived, women and youth at its centre. Today when India has become a power surplus nation, there is not a single village which is without electricity connection and efforts are on in full swing to provide every household with electricity connection. While India’s message of wellness and preventive healthcare through celebration of ‘International Yoga Day’ is sweeping the world, the launching of ‘Ayushman Bharat’ is set to completely transform the health care services in India securing the most vulnerable section of the Indian society. The farmers and the rural sector are not only witnessing unfolding of countless opportunities but are ensured of one and half times return on their cost and scientific and advanced approach in agriculture.

While war on black economy has started yielding dividends with global acknowledgements, the growth rate of economy has instilled a new confidence in the bright future of Indian economy. The 8.2% growth rate in last quarter has surpassed earlier expectations and Indian economy looks set for robust growth in the days to come. India’s performance in the ‘Ease of Doing Business’ and Moody’s upgradation along with encouraging inputs by World Bank and IMF from time to time has shown that a leadership with political will can do wonders and change the course of tide. The Indian economy which was suffering from policy paralysis and countless scams in the time of Congress led UPA government, the credit for delivering it from an ambience of pessimism and negativity to being seen as bright star in the otherwise gloomy global scenario goes to the determined and visionary leadership of Prime Minister Narendra Modi.

The National executive meeting has done well to take note of the remarkable achievements of Modi government and acknowledged the untiring hard work done with innovative approach in transforming the lives of the millions of people. The resolution on Agriculture has rightly highlighted the vision of doubling the farmer’s income and the approach of the Modi government to achieve this goal. The political resolution has rightly applauded the work done by the government in changing the perception about India with the emergence of a great nation on every front. The meeting has also paid its glowing tributes to respected and beloved Atalji. The organisational elections have also been extended for one year in view of coming assembly and general elections. The BJP has emerged from the meeting with the resolve of creating a New India free of homelessness, joblessness, poverty and disease by 2022 when the nation will celebrate its 75th year of independence. There is no doubt that a New India that is united, prosperous, confident and happy under the leadership of Prime Minister Narendra Modi will become a reality.