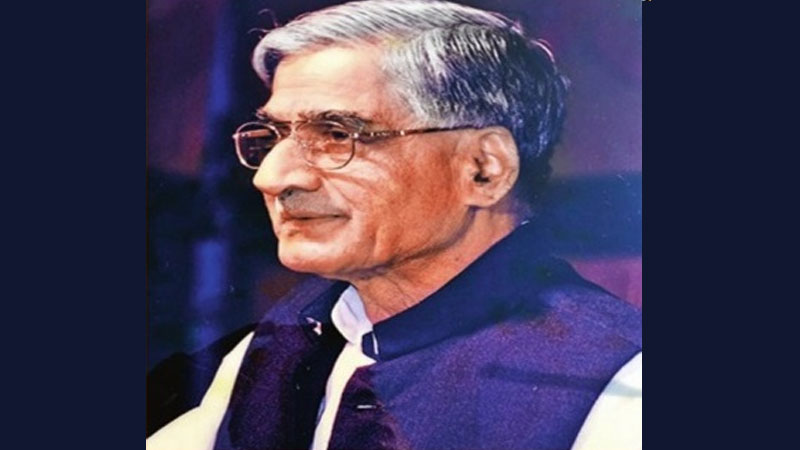 Born on 30 October 1921, Bhai Mahavir was governor of Madhya Pradesh from April 1998 to March 2003. He started his political career with Bharatiya Jana Sangh(BJS). Before joining BJS,he was a pracharak of the Rashtriya Swayamsevak Sangh (RSS). He has authored many books and had served two terms prior to his governorship as a member of the Rajya Sabha. He had an M.A. and Ph.D. in Economics and studied Law (LLB) from the University of Delhi.

He was the son of great freedom fighter Bhai Parmanand. Bhai Parmanand was a member of Arya Samaj and a leader of the Hindu Mahasabha. Bhai Mahavir grew up with an Arya Samaj background and went to study at the Dayanand Anglo-Vedic College in Lahore.

Bhai Mahavir joined the RSS in 1938, in a shakha established by Raja Bhau Paturkar in Lahore. He became a pracharak in 1942, and worked in that capacity in Jalandhar for 2 years. Between 1944 and 1947 he was the Secretary of RSS in Lahore. After the partition, he settled down in Jalandhar and worked as a lecturer. He moved to Delhi in 1956, working as a lecturer in the Panjab University College established for the Panjabi refugees.

Towards the end of 1950, Dr. Shyama Prasad Mookerjee gathered in Delhi a core group of activists to form a new political party, the future Bharatiya Jana Sangh. Bhai Mahavir was among this group,along with Vasantrao Oak and Balraj Madhok. The three of them founded the Panjab-Delhi branch of the Jana Sangh in Jalandhar on 27 May 1951, which later became part of the nationwide `Bharatiya’ Jana Sangh established on 21 October. Bhai Mahavir was named as National General Secretary of the party. He served in that capacity for one year, succeeded by Deendayal Upadhyaya in 1952. He continued on the Working Committee of the Jana Sangh.

Bhai Mahavir continued in senior positions in the Jana Sangh and later in Bharatiya Janata Party. He was elected to the Rajya Sabha during 1968-74 and 1978–84. In 1998, he was appointed as the Governor of Madhya Pradesh and served a full term till 2003. Bhai Mahavir had two daughters and three grandchildren. He was married to Krishna Kumari who passed away in New Delhi on 14 December 2012. Bhai Mahavir passed away at his home in Delhi on 3 December 2016.