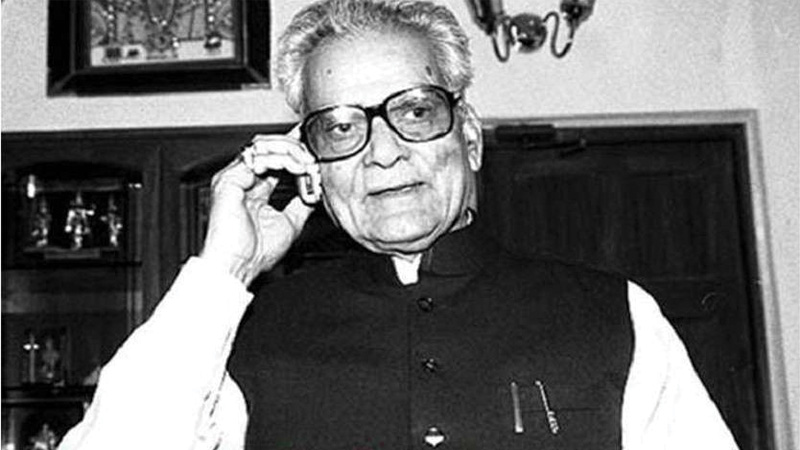 Bhairon Singh Shekhawat (23 October 1923 – 15 May 2010) was the 11th Vice President of India. He served in that position from August 2002, when he was elected to a five-year term by the electoral college until. He also contested unsuccessfully Presidential election in 2007.Shri Shekhawat was a member of the Bharatiya Janata Party (BJP), a leading member of the National Democratic Alliance. He served as the Chief Minister of Rajasthan three times, from 1977 to 1980, 1990 to 1992 and 1993 to 1998.

Referred to as “Rajasthan ka ek hi Singh” (The only lion of Rajasthan) or “Babosa” (Head of the family of Rajasthan), Bhairon Singh Shekhawat entered politics in 1952. In 1952 he was MLA from Ramgarh, in 1957 from Sri Madhopur, 1962 and 1967 he was MLA from Kisan Pol. In 1972 elections he lost but in 1973 he was elected to Rajya Sabha from Madhya Pradesh. In 1975 during emergency he was arrested and sent to Rohtak jail.

After emergency in 1977 he became MLA from Chhabra as Janata Party candidate. In that year the Janata Party won 151 of the 200 seats in the state assembly elections of Rajasthan and Shekhawat took over as the first non Congress Chief Minister of Rajasthan in 1977. His government was dismissed by Indira Gandhi in 1980.

In 1980, Shekhawat joined the Bharatiya Janata Party (BJP) and became MLA again from Chabda and was leader of opposition. In 1985, he was MLA from Nimbahera. However, in 1989 an alliance between the BJP and the Janata Dal won all 25 of the Rajasthan seats in the Lok Sabha and also 138 seats (BJP:84+Janata Dal:54) in the 1990 elections to the Ninth Rajasthan Legislative Assembly. Shekhawat once again became Chief Minister of Rajasthan and was MLA from Dholpur. His government was dismissed in 1992 and President’s rule imposed.

In the next elections, in 1993, Shekhawat led the BJP to be the single largest party, winning 96 seats, himself becoming MLA from Bali but lost from Ganganagar seat. Three BJP-supported independents also won seats and other independents who supported the BJP took its total to 116 and he became Chief Minister of Rajasthan for third time.

In 1998, Shekhawat was elected from Bali again but the BJP lost power and Shekhawat became Leader of Opposition in the legislative assembly. Shekhawat won every election to the Rajasthan Legislative Assembly, except in 1972 when he lost from Gandhi Nagar in Jaipur and in Ganganagar.

Shekhawat was elected as the Vice-President of India in 2002, when he defeated the opposition candidate, Sushil Kumar Shinde by a margin of 149 votes out of the 750 votes polled.

In July 2007, Shekhawat fought the Presidential election as an independent candidate backed by National Democratic Alliance but lost to the United Progressive Alliance-Left backed candidate Pratibha Patil. He became the first vice-president to lose presidential election. Following this defeat, Shekhawat resigned from the post of Vice-President on 21 July 2007.

Shekhawat started the “Antyoday Yojna” scheme, which was intended to uplift the poorest of the poor. The chairman of the World Bank, Robert McNamara, referred to him as the Rockefeller of India. Shekhawat was also known for his control over bureaucracy and the police. He had involvement in policies designed to improve literacy and industrialisation in Rajasthan, as well as tourism centred on the themes of heritage, wildlife and villages. He was also lauded by both, national and international leaders for his historic conduct of the Rajya Sabha.