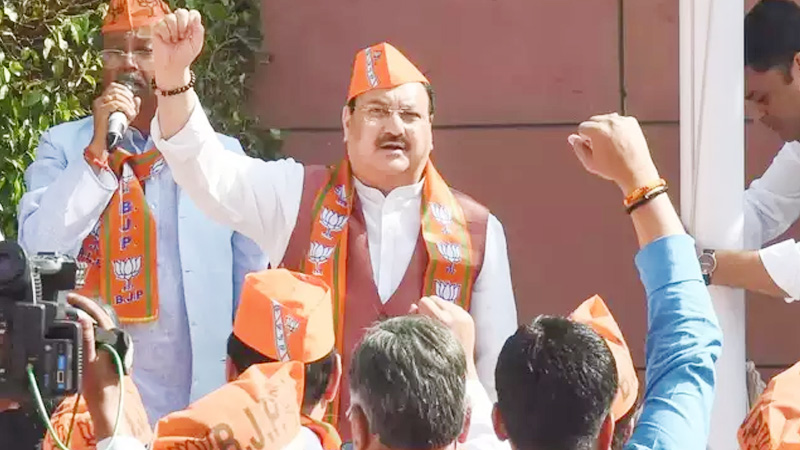 Under the visionary leadership of Prime Minister Shri Narendra Modi and BJP National President Shri Jagat Prakash Nadda the Bharatiya Janata Party celebrated the ‘Samajik Nyay Pakhwada’ across the country from 6th April to 20th April, 2022. The Pakhwada began on April 6, 2022, following the 42nd Foundation Day celebration of the BJP. On that day Hon’ble PM Shri Narendra Modi addressed the Karyakartas. Around 18 lakh Karyakartas accross the country directly listened the address online and party flag was hoisted on the houses of around 31 lakh Karyakartas.

Through the ‘Samajik Nyay Pakhwada’, the party Karyakartas took the pro-poor works and the welfare schemes of the central government to Mandal and District level consecutively for 15 days. In these 15 days, every single day was dedicated to one such unique programme or welfare scheme. All MPs and MLAs also travelled to their respective constituencies and met with the people. These programmes were successfully organized at Booth, Mandal, District and State levels.

The second day of the ‘Samajik Nyay Pakhwada’ i.e. 7th of April was devoted to the ‘Ayushman Bharat’ scheme programme. On this day, BJP Karyakartas visited 48,561 ‘PM Jan Aushadhi Kendras’ across the country and interacted with around 26 lakh beneficiaries.

April 8th was dedicated to the ‘PM Awas Yojna’. On this day, BJP Karyakartas organised around 50,600 Sammelan on already completed Awas Yojna sites and talked to 23 lakh beneficiaries of this scheme and provided them vital information regarding this scheme.

April 9th was dedicated to the ‘Har Ghar Jal’ programme. In August 2019, Prime Minister Shri Narendra Modi launched the ‘Jal Jeevan Mission’ and now more than six crore households have access to clean water from the tap under the scheme. Party Karyakartas talked to around 10,56,358 beneficiaries and to contain water, distributed around 2,28,783 clay pots to accross the country.

‘Vaccination Day’ was observed on 12th April. Under PM Shri Narendra Modi’s vision and leadership, so far, 185 crore COVID-19 vaccine doses have been distributed free of cost in India. During the day the BJP Karyakartas visited 8,753 vaccination centres, 12,074 schools met the beneficiaries and contacted many people who did not take the vaccine for COVID-19 yet. They requested them to take their vaccine as soon as possible. Around 28,347 public representatives and office bearers also participated in these programmes.

April 13 was dedicated to ‘PM Garib Kalyan Anna Yojana’. The scheme was started by Hon’ble PM Shri Narendra Modi in March 2020 due to the global Corona Pandemic and has been extended till September 2022. Under this scheme, the central government is providing free food grains to 80 crore people across the country. On that day around 28,651 beneficiary Sammelans organised and 3,83590 beneficiaries participated in these progarmmes.

Babasaheb Dr. Bhim Rao Ambedkar was born on April 14, 1869. On this day, BJP Karyakartas garlanded Babasaheb’s statues and paid floral tributes in 5,00,800 locations at each booth and performed ‘Sewa Karya’ there. Around 5,506 seminars and conferences were organised, where around 4.5 lakh people participated. The Karyakartas were also interacted with society’s oppressed and underprivileged people on that day.

April 15th was dedicated to Scheduled Tribe Welfare. On this day, BJP Karyakartas honoured people of Scheduled Tribes community who have done exceptional work for society. Apart from that, the Karyakartas also spread awareness drive among Scheduled Tribes people regarding various initiatives taken by Central Government for the benefit of ST community. The ST Morcha also organised meetings of 4,795 SHGs and around 1,41,210 people attended the meetings.

16th of April was dedicated to unorganized workers. Around 6,334 unorganized workers confrence were organised and around 2 lakh workers participated in it. BJP Karyakartas also worked on registering workers who have not yet been registered on this day.

The 17th of April was celebrated as Financial Inclusion Pride Day. On that day BJP Karyakarts visited around 3,04,243 ‘Jan Dhan Yojna’ beneficiaries and registered around 3,42,744 people under various insurance schemes. Noteworthy, under the leadership of Prime Minister Shri Narendra Modi, the Central Government has been ensuring social security under the mantra of ‘Jan Dhan Se – Jan Suraksha’. For that the number of beneficiaries of Prime Minister’s Insurance Schemes is continuously increasing. As per the data available, now the total beneficiaries of ‘Atal Pension Yojana’ are more than 4.01 crores, ‘Pradhan Mantri Jeevan Jyoti Bima Yojana’ are more than 12.66 crores and the total beneficiaries of ‘Pradhan Mantri Suraksha Bima Yojana’ are 28.19 crore.

April 18 was dedicated to the ‘Swachh Bharat Mission’. On this day, BJP karyakartas cleaned the statues of national heroes situated in various parts of the country. Apart from this, programmes like cleaning the surroundings, cleaning the rivers, temples, ponds etc., were carried out in 54,562 locations and 1,07,133 ‘Swachta Sainiks’ felicitated on the occasion.

The ‘Nutrition campaign’ day was observed on 19th of April. On this day, BJP karyakartas visited 15,920 PHCs and Aanganwadi centers in their respective villages and felicitated 1,26,568 Aanganwadi workers. They organized public awareness campaigns on nutrition and distributed 4,41,648 food packets in these centres.
Various programmes relating to the ‘Amrit Mohatsav’ were organised on the last day of the ‘Samajik Nyay Pakhwada’. During which 3,597 ‘Abhinandan Sabha’ for freedom fighters were organised where 7,441 freedom fighters participated. Around 1,43,185 BJP Karyakartas spread awareness about the work done by the Modi Government during the last eight years for the welfare of the society, the poor and the common people on the last day of ‘Samajik Nyay Pakhwada’.