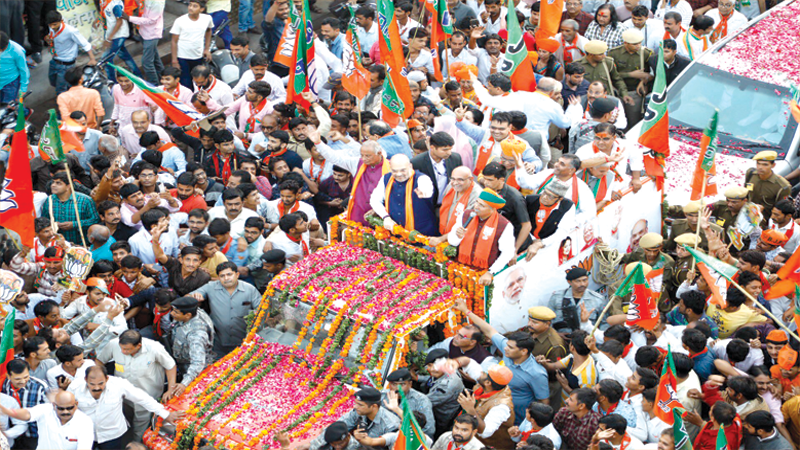 BJP National President Shri Amit Shah on 21 November, 2018 reiterated that BJP was committed to building a Ram temple in Ayodhya and it would not change its stand. He also exuded confidence of forming next government at the Centre in 2019 with a majority higher than that of the present one despite the Congress’ bid to forge a grand alliance.

Shri Amit Shah made the remarks while interacting with youths at a function in Jaipur. He targeted the Congress and asked youths and party workers to ensure BJP’s victory in the state for its unhindered progress.
“The BJP is committed to building the Ram temple in Ayodhya,” Shri Shah said, adding there was no question of diluting or changing the party’s stand. However, he said the matter was in the Supreme Court and the party wanted a ‘Nyayik Samadhan’ of the dispute.

He accused the Congress of talking of forging ‘mahagathbandhan’ to confuse the voters and urged the BJP workers and supporters not to be swayed by the Congress’ propaganda.

During his interaction with youths at Jaipur’s Tagore School auditorium, Jaipur the BJP National President fielded questions from participants present there as well at six other locations in Bharatpur, Ajmer, Kota, Jodhpur and Udaipur.

Shri Shah also highlighted the work of the state and the Union governments and the BJP’s vision for the youths and development.

Speaking to the youth, Shri Shah praised the development efforts of the Raje government in the State. Stating that there are many central and state government schemes which are “transforming the state”, he said, “There is not a single family in Rajasthan which didn’t get any benefit. In five years of governance, the Vasundhara Raje government reached every person. Twenty-four lakh families benefited from BHAMASHAH SWASTHYA BIMA YOJANA, 32 lakh people received GAS CONNECTIONS UNDER UJJWALA YOJANA, 40 lakh people received LOANS UNDER MUDRA SCHEME, 13 lakh benefited from PRADHAN MANTRI AWAS YOJANA, 50 lakh women received MOBILE PHONES, college youths received laptops, girls received scooties, 11 lakh daughters received benefits of the RAJSHREE YOJANA, toilets were built in 80 lakh homes and many more schemes changing the face of Rajasthan.”

Addressing on the occasion the BJP President said, the BJP Karyakartas must ask Congress workers about their performance in the state and seek accountability. “Friends, I appeal to all of you, whenever you see a Congress member seeking votes, hold him by his collar and ask him, what gives you the right to come to us?”
Shri Shah said the Congress “afflicted the democracy with three ills: casteism, nepotism and appeasement. These ills ate the merits. People who had merit and looked promising did not get a platform.”

Noteworthy, the voting for Assembly elections in Rajasthan will be held on 07 December, while the counting of votes will take place on 11 December. The BJP released its second list of candidates for Rajasthan assembly elections, declaring nominees from 31 constituencies, on 15 November and the party has put faith in 21 new faces.