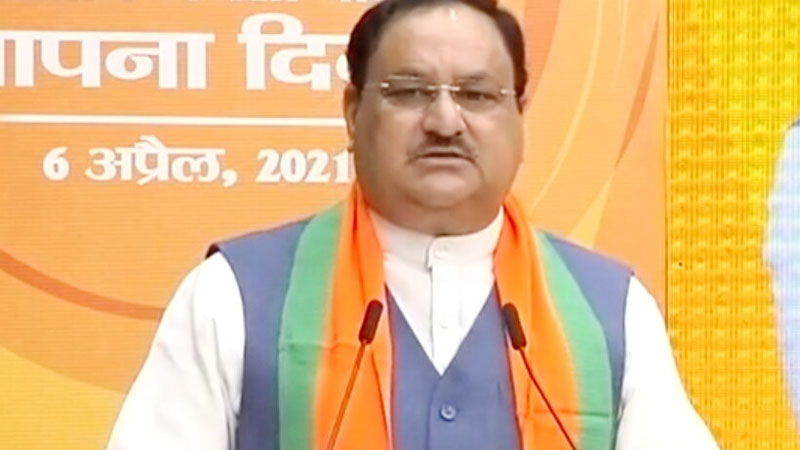 While addressing Shri Nadda extended his greetings to party Karyakartas and said, “I give my hearty greetings to all the committed and dedicated workers of the Bharatiya Janata Party on the occasion of the 41st Foundation Day”.

Shri Nadda said the Bharatiya Janata Party today is the world’s largest political party and is committed towards its ideology, nation’s service and people’s welfare and wellbeing. He said due to the hard work, dedication, perseverance and sacrifices, the Bharatiya Janata Party has covered a momentous journey from two Members of Parliament to 303 MPs in Lok Sabha today. Excerpts of the speech;

• Dr. Shyama Prasad Mookerjee and Pandit Deendayal Upadhyaya are the founding fathers of our party. Strong nationalist Dr. Shyama Prasad Mookerjee sacrificed his life while working for national integration and Pandit Deendayal Upadhyaya worked for ‘Ekatm Manavvaad’ and ‘Antyodaya’ to ensure upliftment and progress of the poorest of the poor and most backward class people of our society.

• Under the leadership and guidance of Prime Minister Shri Narendra Modi, India is continuously moving ahead on the path of growth, development and prosperity. India has established its name in the global arena. Today, India is known for its leadership and its contributions to the world. And we all Indians feel extremely proud for this.

• From ‘Ekatm Manavvaad’ to ‘Antyodaya’ and now to ‘Sabka Saath, Sabka Vikas & Sabka Vishwas’ the Bharatiya Janata Party is consistently moving forward by following these principles. Prime Minister Shri Narendra Modi has implemented various pro-poor programmes and exceptional policies for greater public good which has led to changing of our nation’s image, its fate and destiny.

• The Bharatiya Janata Party is not just a political party but it has its varied social dimensions. The manner in which lakhs of party workers served the humanity during the Corona pandemic across India and provided them food, medicines and other relief material and showed the world what selfless service of needy people mean. It is an exemplary and magnificent example of social service shown by our party workers.

• Under the leadership and guidance of Prime Minister Shri Narendra Modi 130 crore Indians unitedly and strongly fought against the Corona pandemic and the entire world wholeheartedly praised this fight against the pandemic and also took inspiration from it.

• During the Corona pandemic India provided medicines and other medical aids to around 159 countries across the globe, while we are providing Corona vaccine to 72 nations and helping them in their fight against the pandemic.

• Assembly elections are currently being held in five States — West Bengal, Assam, Tamil Nadu, Puducherry and Kerala and I am very sure that people of these states will shower their blessings on the Bharatiya Janata Party and we will do exceptionally well in all these states.

• From the day of the foundation of the Bharatiya Janata Party our great leaders — from Dr. Shyama Prasad Mookerjee to Pandit Deendayal Upadhyaya, Bharat Ratna Atal Bihari Vajpayee, Sundar Singh Bhandari, Kushabhau Thakre– all these great leaders and thinkers have nurtured the Party since the very beginning. Due to the hard work, dedication, perseverance and sacrifices, the Bharatiya Janata Party has covered a momentous journey from two Members of Parliament to 303 MPs in Lok Sabha today.

@Jagat Prakash Nadda
On BJP’s 41st #Sthapna Diwas the valuable guidance of respected Prime Minister Shri Narendra Modi Ji was received which will motivate all of us to serve the people and crores of BJP karyakartas will follow it literally.