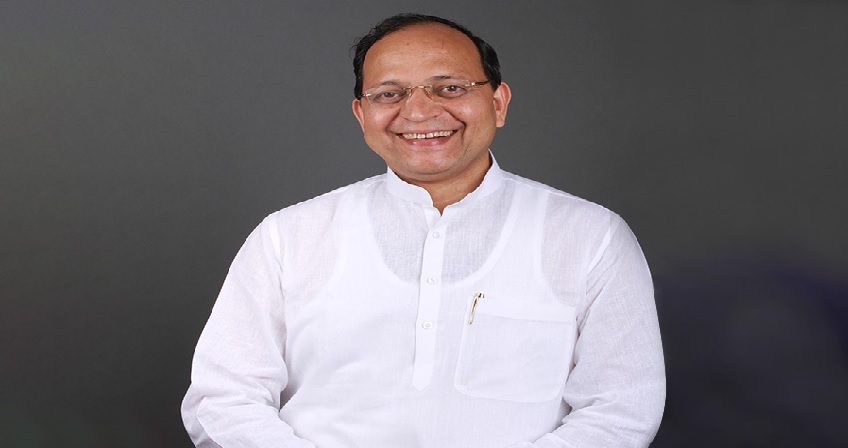 B
JP National General Secretary Shri Arun Singh is looking after the PM’s programmes and In-charge of BJP National Headquarters and states like Odisha. He is deeply engaged in party campaign for Lok Sabha elections 2019. Kamal Sandesh Executive Editor Dr. Shiv Shakti Bakshi discussed with him various election related issues and his perception of the ground reality. Here are the excerpts :

You have been touring many states in the course of the Lok Sabha election campaign. What kind of atmosphere you see prevailing on the ground and why ?

See, whatever I have seen at ground level, it can be said to be a “Modi wave’. It is “Modi wave” everywhere. Everyone wants to make Shri Narendra Modi Prime Minister of the country in 2019 also. People are full of enthusiasm and they are filled with confidence also that Modi ji will become PM again. You will ask about the reasons. The main reason is that people consider the work done for poor, farmer, youth, women, SCs and STs by Shri Modi ji in last five years as unprecedented. Along with this he has enhanced the respect of India across the world. He has made the identity of India as a powerful nation. The 130 crore people of this country are filled with a sense of pride.

Secondly, on the organisational front also BJP has a membership of more than 11 crore and in the last four years booth committees were continuously constituted, booth centric works and meetings at booth level have taken place. Full timers are working for last three years. The organizational work which has been done in last four years under the leadership of our party president Shri Amit Shah is unprecedented. The national president has toured every state at least three times and even spared time for night stays and also conducted meetings.

Third reason is that the character of this ‘gathbandhan’ has been exposed. It is a ‘gathbandhan’ of self interest. It is a ‘mahamilavati’ alliance. It is made to stop one person. These kinds of alliances never succeed.

We are contesting the elections on the agenda of development. The massive transformational work done by Modi ji in last five years and the vision under which these works will continue till 2022 to celebrate 75th anniversary of our independence is getting huge people’s support. With the vision of ‘New India’ which he has given, we are treading on the path to realise that vision. The leaders of the ‘gathbandhan’ who are fighting among themselves have only exposed their contradictions.

Therefore we are not bothered about them. We are not concerned about the alliance. We as karyakartas are engaged in our works.

How do you see the last five years economic performance of the Modi government ?

See, there are two things – if you compare the economic situation from what we had in 2014, then we can say inflation is under control. Similarly Current account Deficit is also under control. And thirdly, sensex is also high and interest rates have also come down. In this election price rise is not an issue. Along with this India’s ranking in Ease of Doing Business has improved significantly and Transparency International and IMF are acknowledging our efforts and applauding Modi ji. Many international agencies are also upgrading our rankings. We have become sixth largest economy in the world and on the way to become fifth very soon. It is a very huge achievement.

Modi government has taken many innovative steps. What are the results ?

Through Make in India, Digital India, Start Up and Stand Up programmes entrepreneurs and youth are getting encouragement and business is increasing. For instance earlier there were only two companies in the field of mobile manufacturing but now this number has increased to 120! In the leadership of Modi ji speedy administrative reforms have taken place. Through Digital India, corruption too has been reined in. The beneficiaries are now getting money directly into their accounts through DBT. Millions of funds have been saved till date. Digital India has also become instrumental in giving instant reliefs in many cases and problems are getting solved. Even accountabilities are getting fixed.

Almost all political analysts believe that the states where BJP was not so strong earlier, this time BJP is getting massive support in them. How do you see this phenomenon ?

Actually PM Modi has been saying from the beginning that he wants to see the states in the east not only doing as well as those in the west but doing even better than them. Due to various programmes and projects of PM for the eastern states people feel that Shri Narendra Modi wants to do a lot for them. For Odisha also PM has plans in his mind therefore BJP’s performance in Odisha is also improving. The 19 year rule that was in Odisha, under this rule the basic facilities like electricity, water, education, irrigation, employment have broken down and people feel that Naveen Patnaik is now not capable of developing the state. Therefore people have made up their mind in favour of BJP. In state and at center, they want to see BJP government. In this context the organisational work has also expanded. Earlier there were only 450 mandals in the entire state, the number of these mandals have now been increased to 1000. Smaller mandals were constituted and along with these districts units were also formed. Booth committees were formed. Agitations were organised upto mandal level. As a result in the local body elections BJP was able to win 10 times more than 36 seats which it held earlier.

The Odisha BJP organisation has become much stronger. The organization has reached upto booth level. In the last four years BJP national president visited Odisha several times. He himself under the programme ‘Mera booth, sabse majboot’ pasted posters on the walls of houses in the state. I have seen for the first time that a national president has himself pasted the posters. To extend the ideology and work of party in the state efforts were made upto the booths.

The central government’s work has been carried out in West Bengal but some of the work has been stopped. Mamta Didi is hesitant in implementing centre’s scheme in the state. At the organizational level, expansion work is going on continuously. Entire West Bengal is feeling oppressed by Mamta Didi. The kind of violence which Mamta Bannejee is unleashing on our activists is making the commitment of our karyakartas firmer and people’s support has been increasing. Today support for us has increased manifold. It is the history of our country that people never tolerate violence. People go with non-violence. Perhaps Mamta Bannerjee is not aware of it, therefore when the results will come out on 23rd, it will be one-sided in the favour of BJP. In other states also whether in Kerala or in Tamil Nadu, BJP will make good entry and in Northeast BJP is set to get very good results.

You have been looking after the programmes of the Prime Minister and have been In-charge of the party Headquarters for last four years. How do you manage your work and what kind of response you see in PM’s programmes?

There is no problem in managing the works. Everything can be done if one is well organised and knows to manage time well. Along with all other works I spend one-two days in the party Headquarters after 5-6 days of pravas and complete all the pending works.

So far PM’s programme is concerned, I can say that even while personality of Shri Narendra Modi ji being so huge, he never raises any question on the programmes assigned for him by the party. All programmes are proving to be very successful.
People are coming in unprecedented numbers in the PM’s programmes. The kind of people’s support and response that we are witnessing in his programmes and the kind of enthusiasm these programmes are generating, I can see that BJP is going to win even more seats than in 2014 elections.