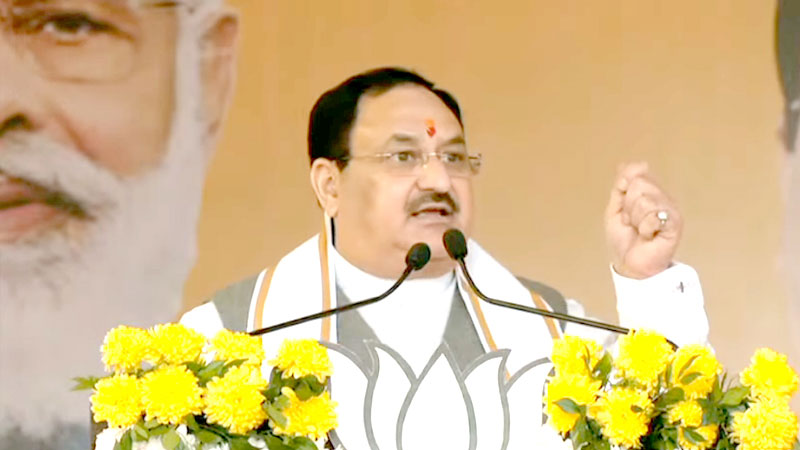 Addressing the Booth Presidents Sammelan in Etah, Uttar Pradesh on 12 December 2021, BJP National President Shri Jagat Prakash Nadda said, “Today I am in the Braj region of Uttar Pradesh and interacting with the Booth Presidents of the party. The media persons and the people of the country should see that this is not a public rally, but a workers’ conference of the party. The wave of growth and development is currently blowing in the entire state. And everyone can see that the Bharatiya Janata Party is going to register a massive victory in the Uttar Pradesh assembly elections”.
He said barring the Bharatiya Janata Party, all the Opposition political parties have been contesting on dynasty, casteism, appeasement and nepotism. While some parties do politics in the name of Jinnah, some do appeasement of casteism and religion.

It is only the Bharatiya Janata Party which does politics of ideology and implements on the ground our commitment of ‘Sewa Hi Sangathan’. We believe in ‘Sabka Saath, Saka Vikas, Sabka Vishwas and Sabka Prayas‘. We ensure empowerment and wellbeing of all communities and all citizens.

SALIENT POINTS OF THE SPEECH

• I am fully confident that the people of Uttar Pradesh will seal the ‘jinn‘ of Jinnah in a bottle and will once again elect the Bharatiya Janata Party which has entirely changed Uttar Pradesh into a progressive and development-oriented state.
• BJP government led by Yogi Adityanath has made Uttar Pradesh a riot -free and mafia -free state. The people of Uttar Pradesh clearly remember the days when the state used to be no democracy and the state was ruled by forces that indulged in violence and corruption.
• The double engine government led by Prime Minister Shri Narendra Modi at the Centre and Chief Minister Shri Yogi Adityanath has led to opening of 30 new medical colleges in Uttar Pradesh and by 2022 this figure will cross 42 medical colleges in the state.
• The Yogi Adityanath Government in Uttar Pradesh has given development, progress and growth a new dimension, a new meaning. There are several important examples that showcase this change.