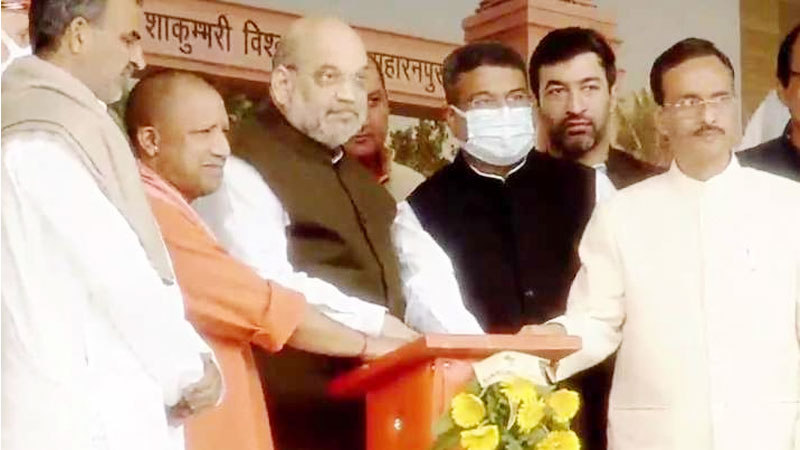 The UP government has rid its western region of goondaism, riots and mafia and restored law & order and the prestige,’ Union Home Minister Shri Amit Shah said while laying the foundation stone of Maa Shakumbhari University in Saharanpur, Uttar Pradesh on 02 December, 2021.

Shri Amit Shah laid the foundation stone in the presence of Uttar Pradesh Chief Minister Yogi Adityanath and other senior leaders. The university will be constructed at 92 crore over 50.43 acres and is named after Devi Shakumbari, whose temple is in Behat and revered throughout western UP. The Maa Shakumbhari University will have 264 colleges affiliated and begin functioning next year. Maa Shakumbhari, an incarnation of goddess Parvati, has a temple dedicated to her near Saharanpur. The university is expected to help students of Saharanpur and neighboring districts of Muzaffarnagar and Shamli, who migrated to Chandigarh, Haryana and Dehradun for education.

Shri Shah also spoke of MSP dues for cane, end to sale of sugar mills, closure of illegal slaughter houses in UP. He said when I came to Saharanpur in 2017 during last assembly election; lot of people told me that they are forced to flee from the state due to under development and unemployment. Now, the scene has completely changed and UP is on the path of rapid progress under the BJP government. To continue this pace of development, I request the voters to vote for BJP in the upcoming assembly polls to keep away those who forced them to migrate earlier from UP, he added.

Shri Shah said compare to the previous governments, dacoity has gone down by 70% in Uttar Pradesh, loot has come down by 69%, murder by 30% and deaths due to dowry has come down by 22.5% and asked SP chief Akhilesh Yadav to weigh these statistics. He said during the SP rule there was rule of mafias in UP and now there is rule of law, and this is major difference between BJP rule and earlier rules.