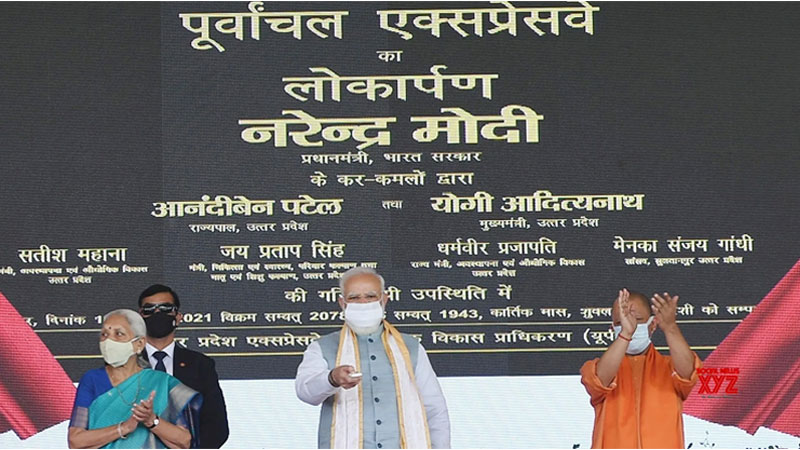 NOW DREAM OF DEVELOPMENT OF UP IS VISIBLE

The Prime Minister lauded the Chief Minister of Uttar Pradesh Shri Yogi Adityanath, his team and the people of UP on the completion of Purvanchal Expressway. He also thanked the farmers whose land was acquired for this project. He lauded the workers and the engineers who were involved in the project.

Shri Modi lamented that in spite of such a large area blessed with the Ganga ji and other rivers, there was no development till 7-8 years ago. He said in 2014, when the people gave him an opportunity to serve the country, he gave priority to the development of UP. He envisioned that the poor should get pucca houses, the poor should have toilets, women should not have to defecate in the open and everyone should have electricity in their homes and many such works are needed to be done here. Criticizing the previous Government, the Prime Minister said he was deeply pained that the then UP government did not support him in providing these amenities. He said that “the people of UP will hold the government accountable and remove it for the unfair treatment of the people of UP, discrimination done in development and the way only the interest of their family was being served by the then government.”

The Prime Minister said with the active participation of the people, the dream of development of UP is now visible. New medical colleges are being built, AIIMS is coming up, modern educational institutions are being built in UP. Just a few weeks ago the international airport in Kushinagar was inaugurated.

The Prime Minister said it was also a fact that parts of a vast state like UP were earlier cut off from each other to a great extent. People used to go to different parts of the state but they were troubled due to lack of connectivity. For the people of East Uttar Pradesh, even reaching Lucknow was quite a task. “For previous Chief Ministers, development was limited to where they had their homes. But today, the demands of Purvanchal are given equal importance as the demands of the West” the Prime Minister stressed.

He said that this expressway will connect those cities with immense aspiration and huge potential for development with Lucknow. He said where the good road leads, good highways reach, there the pace of development increases, job creation happens faster.

Shri Modi noted that for industrial development of Uttar Pradesh, excellent connectivity is necessary, every corner of UP needs to be connected. He said as expressways are getting ready in UP, the work of the industrial corridor has also started. Very soon new industries will start coming up around Purvanchal Expressway. In the coming days, in the cities situated along these expressways, work on products related to food processing, milk, cold storage, storage of fruits and vegetables, cereal, animal husbandry and other agricultural products are going to increase rapidly. He said skilled manpower is essential to the industrialization of UP. So work has also been started to train the manpower. ITI and other training institutes and medical institutes will also be established in these cities.

He said that the Defense Corridor being built in UP is also going to bring new employment opportunities here. He said these infrastructure works in UP, will give new heights to the economy in the future.

The Prime Minister said even if a person builds a house, he first worries about the roads, examines the soil, and considers other aspects. But in UP, we have seen a long period of such governments who showed dreams of industrialization without worrying about connectivity. The result was that due to lack of necessary facilities, many factories located here were locked. In these circumstances, it was also unfortunate that both Delhi and Lucknow were dominated by the dynasties. For years and years, this partnership of family members kept crushing the aspirations of UP.

Shri Modi said today the double engine government in UP is working considering the common people of UP as their family. An environment is being created for new factories. He said keeping in mind the needs of this decade, infrastructure is being built to build a prosperous Uttar Pradesh.

The Prime Minister said the government is working day and night for the all-round development of UP. Along with connectivity, top priority is also being given to infrastructure in UP. He said in just 2 years, the UP government has almost provided piped drinking water connection to 30 lakh rural families. And this year the double engine government is fully committed to provide piped drinking water to lakhs of sisters at their homes. He said it is our duty to be engaged in nation building with the spirit of service, we will do the same.


Indian Air Force presented a thrilling air show along the landing strip on Purvanchal Expressway, which was dedicated to the nation by Prime Minister Shri Narendra Modi. The demonstration featured nail-biting manoeuvres by IAF’s Mirage 2000, Sukhoi-30 and Jaguar fighter jets.
Prime Minister Shri Modi landed on the airstrip in an IAF aircraft to attend the inauguration ceremony for the Purvanchal Express. The expressway includes a 3.2 km long landing strip which can be used by fighter and transport jets during emergencies.