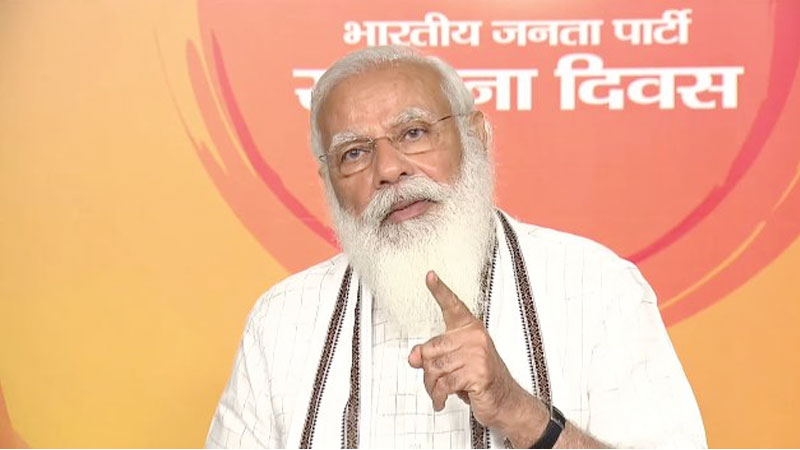 “We have also been receiving the blessings of our seniors like LK Advani ji, Murali Manohar Joshi ji, who shaped the party and extended the party. I salute every such senior person who has dedicated his life to the party,” he added.

“Our mantra has been “Vyakti Se Bada Dal Aur Dal Se Bada Desh”. This tradition continues to this day. We fulfilled Dr. Syama Prasad Mookerjee’s vision, scrapped Article 370 and gave Kashmir the constitutional rights,” said PM Shri Modi on BJP’s 41st foundation day. Talking about the untiring contribution of Karyakartas during the Corona pandemic, the Prime Minister remarked, “Last year, Corona posed an unprecedented crisis to the entire country. Then all of you, forgetting your happiness and sorrow, continued to serve the countrymen. You pledged for the ‘Seva Hi Sangathan’, worked for it.”

“Gandhiji used to say that decisions and schemes should be those which benefit the person standing in the last line of society. We have worked tirelessly to bring that original spirit of Gandhiji,” he said.

Reiterating the meaning of the BJP, the PM stated, “BJP means defeating dynasty-based politics. It means an opportunity to able leadership. It means transparency and good governance. It means ‘Sabka Saath, Sabka Vikaas, Sabka Vishwas’.”
He said that the values that we have, we do not believe in political untouchability. Therefore, we take pride in making the Statue of Unity dedicated to Sardar Patel. That is why we take pride in constructing Panchtirtha for Babasaheb.

Attacking the opposition, PM Shri Modi said, “Parties that began with help from local aspirations, became a family-based party later. These parties, who were wearing a mask of secularism, are finally being unmasked. The person, who makes plans for everyone, talks about the rights of all and works for everyone, is called communal.”

“Today they are spreading false narratives – sometimes with regard to CAA, sometimes with regard to agricultural laws, sometimes on labor law, every BJP Karyakarta must understand that there is a well-intentioned politics behind it, this is a big conspiracy,” he cautioned everyone against opposition’s propaganda.
Addressing the party Karyakarta, he said, “We also have to take Amrit Mahotsav to every citizen of the country. The Amrit Mahotsav of independence is also an opportunity to set the country’s goals for the next 25 years. BJP and its Karyakartas also have a big role to play in meeting these goals of the country.”

@Narendra Modi
The BJP is an ongoing campaign to win the hearts of the country and countrymen, not a machine to win elections.
We serve the people honestly for 5 years, be it in the government or not in the government, remain connected with the people in every situation, live for the people.