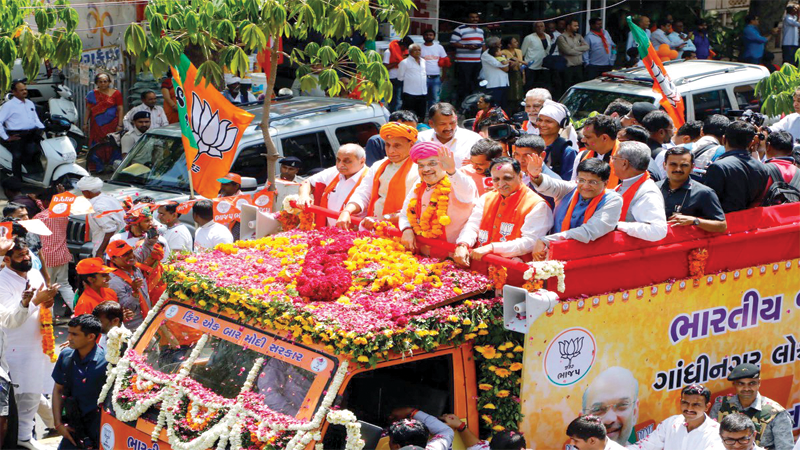 Before filing his nomination, Shri Shah held a four-km road-show in Ahmedabad from Sardar Patel Statue after paying tribute to Sardar Vallabhbhai Patel in the Naranpura area of Ahmedabad to Patidar Chowk in the Ghatlodia area.

Addressing the ‘Vijay Sankalp Sabha’ Shri Amit Shah said, “I started here in 1982 as a booth-level worker. From distributing pamphlets, putting up posters, doing booth-level work, today I am fortunate that my party – the BJP – has made me the National President of the world’s largest party. It has been a great journey for me,” Shri Shah said. “If you take out BJP from my life, I will be left with zero (shunya),” he added.
Home Minister Shri Rajnath Singh said Shri Amit Shah is going to contest from the seat where our veteran leader Shri LK Advani used to contest. This is a big move, and I am sure Shri Amit Shah will live up to the expectations of this constituency. Further he said if Indira Gandhi can be praised for dividing Pakistan, why shouldn’t PM Shri Narendra Modi get the credit for Balakot air strike. 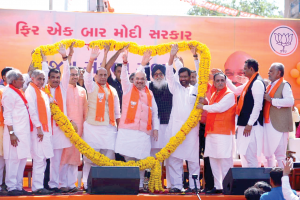 Union Minister Shri Nitin Gadkari said the BJP National President Shri Amit Shah has made our party largest in the world. He has taken the party to a new high.
Speaking at the Vijay Sankalp Sabha, Uddhav Thackeray chief Shri Shiv Sena said my father taught me to do everything from heart. Earlier issues that Shiv Sena raised were of the people and later BJP-Shiv Sena jointly settled them. Now the alliance is strong and will get wonderful results in the upcoming elections in Maharashtra and Gujarat. 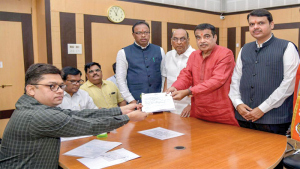 Union minister Shri Nitin Gadkari filed his nomination on 25 March, 2019 for the Nagpur Lok Sabha seat, where polls will be held on April 11.

Shri Gadkari, who had defeated Vilas Muttemwar (Congress) in the 2014 elections by a margin of 2.84 lakh votes, said he will win with a bigger margin this time around. “This time, I will win with a bigger margin. People have a good opinion of the work done by the Shri Narendra Modi-led government in the last five years. Our government did more than what was promised in the poll manifesto,” he told reporters after filing his nomination.

Shri Nitin Gadkari was accompanied by Maharashtra Chief Minister Shri Devendra Fadnavis, Energy Minister Shri Chandrashekar Bawankule, family members and a large number of party workers, while filing his nomination. “Your support and love is the biggest strength for us,” Shri Gadkari said.

CM Shri Fadnavis said Shri Nitin Gadkari will register a historic win from Nagpur. He will create a record in Maharashtra, the Chief Minister said, adding the BJP-Shiv Sena combine would win 45 of the 48 Lok Sabha seats in the state.

The National BJP President Shri Amit Shah on 27 March, 2019 appointed Shri Naresh Bansal as the interim president of Uttarakhand till the elections are over in the state as Uttarakhand BJP state President Shri Ajay Bhatt contesting for Lok Sabha polls from Nainital seat. Shri Dhan Singh Rawat is also appointed as the Convener of Election management Committee of the state.