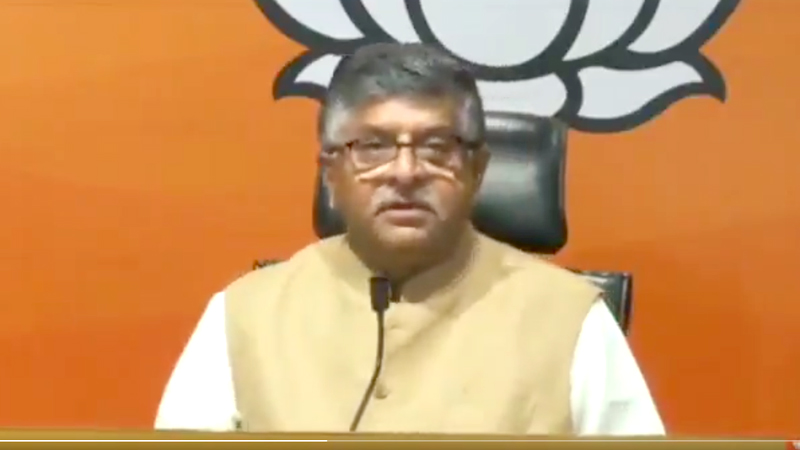 Senior Bharatiya Janata Party leader Shri Ravi Shankar Prasad addressed a press conference at the Party Headquarter on Monday and slammed Congress and agenda-driven some agencies over false reports on Pegasus snooping. Calling the report baseless, he claimed all charges to be an attempt of sensationalism.

‘BJP strongly refutes, condemns the baseless & bereft of political propriety comments leveled by Congress against the BJP. It is a new low for a party that has ruled India for more than 50

years,’ says BJP leader Ravi Shankar Prasad on ‘Pegasus Project’ media report. Shri Prasad stated that there is not a single shred of evidence so far that links either the Central government or BJP to this controversy. He adds that this is a digital case of spyware, and thus at least some concrete evidence in data format should be presented to vindicate the charges laid by Congress.

He told the reporters that yesterday, we saw a sensationalist report by a fringe news portal which is infamous for circulating fake news. However, even after days of build-up, it turned out to be a damp squib, as admitted by many people on social media. He also quoted India’s Minister for Electronics & IT’ statement given in Parliament that ‘the press reports have appeared a day before the Monsoon session of Parliament. Our IT Minister confirmed today that lawful interceptions of a phone can only be made as per relevant rules under provisions of Section 5 of Indian Telegraph Act along with the permission of Home Secretary of the centre or Home Secretary of the state. This cannot be a coincidence.The press reports of 18th July 2021 also appear to be an attempt to malign the Indian democracy and its well established institutions.’ While political parties and sections of the media tried to make it a big issue, all it became was a big embarrassment for those who sought to create this controversy, he added.

Senior BJP leader said that there seems to be a new trend of people who have self-certified claims of being snooped upon, without any proof. Shri Ashwini Vaishnaw, the Minister for Electronics & IT summed up the sensationalism well when he said in Parliament that the publisher of the report states that it cannot say if the numbers in the published list were under surveillance. Even the company whose technology was allegedly used has denied these claims outrightly. And the time tested processes in our country are well-established to ensure that unauthorised surveillance does not occur.

Attacking the nexus between anti-India elements, Shri Prasad said that there is an involvement of various international organisations who run a sophisticated nexus with dubious players in this report. This nexus constantly runs an agenda against India, its people and its development. It is shameful that parties like the Congress are parroting the line of such organisations! It is a new low for India if our Opposition parties are involved as ‘supari’ agents.

Shri Prasad also attacked Amnesty International saying that “Can we deny that bodies like Amnesty had a declared anti-India agenda in many ways?” They withdrew from India when we

asked them about their foreign funding as per law. Those who have broken the story themselves did not claim that a presence of a particular number in the database does not confirm that it is infected with Pegasus. It is important to reveal all these facts in front of the nation. WhatsApp very specifically contended before the Supreme Court that its data cannot be hacked by the Pegasus of the company system. He questioned why only India is being “targeted” for the use of the spyware when 45 nations are using it.

Senior BJP leader said, “The NSO, which is the manufacturer of Pegasus, has clearly said that its clients are mostly Western nations. So why is India being targeted in this matter? What is the story behind this? What is the twist in the tale?” Some people were brought in and their names were dropped, he added.

Shri Prasad said India’s development being seen as a threat to ‘Certain Forces’. It was well known that the Parliament session would begin. How is it that a global coordinated attack happens just in time to attempt to derail the Parliament session? Is it a mere coincidence? Or is it revenge against India for looking to become self-reliant rather than a slave of global forces? It seems like an India that is bouncing back from COVID-related disruption is being seen as a threat by certain foreign elements and some Indians are helping them in distracting and disrupting India’s development agenda. They want to create some issue or the other to disrupt the parliamentary proceedings and this Pegasus issue, despite being laid to rest earlier, is sought to be rekindled with malicious intent.

Senior BJP leader said India’s rise in the last few years under our Prime Minister Shri Narendra Modi seems to have rattled certain international cliques and cabals. These people have run a constant and hateful agenda against India internationally – sometimes it is about casting aspersion of India’s diversity and pluralism, sometimes it is about creating rifts in Indian society, sometimes it is about halting development projects in India and some other times it is about raising non-issues to hurt India’s image internationally like this Pegasus matter. Isn’t it surprising that there are 45 countries allegedly using Pegasus but India which has denied allegations of using Pegasus is being targeted and the remaining countries are all above board? Or is this yet another toolkit to target India alone? Clearly, there is a larger conspiracy afoot to malign India.

Shri Prasad said, In 2019, Congress party and certain people tried to allege that the government was using some kind of spyware called Pegasus to do surveillance. These were busted as wild theories back then, but the same theories have been lazily brought back again. The allegations did not carry any proof and were simply assertions. In the Supreme Court of India, WhatsApp had denied the allegations that its data can be hacked by Israeli spyware Pegasus. Who was representing WhatsApp there? It was Kapil Sibal. Now, if some people have a problem trusting the government or BJP, they can at least trust Mr Sibal! This only goes to show that there are no real issues to attack the government with, which is why an imaginary issue is being created. Certain political parties and certain sections of the media should, for a change, see if they can find some real issues rather than simply channel their overactive imagination and embarrass themselves.

Senior BJP leader pointed that an RTI reply from 2013 revealed that around 9,000 phones and 500 email accounts were monitored every month by the UPA government at the time. Mr

Chidambaram, then a Union Minister had bugged another Union Minister, the late Pranab Mukherjee. This is the ‘charitra’ of the Congress. Even recently, the Congress government of Rajasthan was indicted in a phone tapping controversy in Rajasthan. One can go on and on about Congress’s history of infringing upon people’s privacy and freedom.