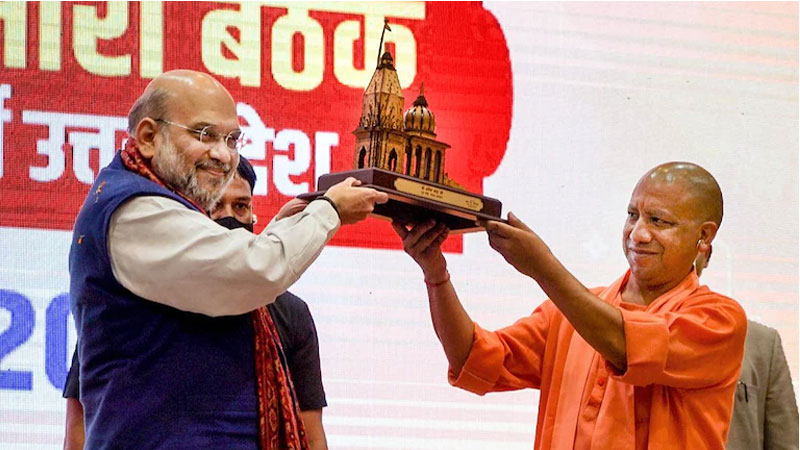 Union Home Minister Shri Amit Shah visited Uttar Pradesh in a two day Pravas from 12 November, 2021. The Union Home Minister was received by Chief Minister Yogi Adityanath and other senior leaders at the airport. Soon after his arrival, he reached the Banaras Hindu University, where he paid floral tributes to the founder Madan Mohan Malviya’s statue on his Punyatithi.

During his UP visit, Shri Amit Shah first attended the Akhil Bharatiya Rajbhasha Sammelan as the chief guest held at Deendayal Sankul in Varanasi. UP Chief Minister Yogi Adityanath also attended as a special guest. Addressing the Sammelan in Varanasi he said that the Central government has given special emphasis on Rajbhasha under Prime Minister Shri Narendra Modi’s leadership.

Having announced that the BJP is eying to win 300 plus seats in UP, Shri Shah told the Karyakartas to apprise the electorate of welfare schemes started by the BJP governments at the Centre and in UP.

Shri Shah visited Azamgarh on November 13, 2021 and laid the foundation stone of a state university and addressed a public meetings in Azamgarh and Basti. The university will come up on 52-acre land which has already been acquired.

The Union Home Minister addressed a public rally in Azamgarh, where he said BJP stands for ‘Jandhan, Aadhar and Mobile’, while Samajwadi Party stands for ‘Jinnah, and Mukhtar (Ansari)’.

During his address, Shri Shah said, “Azamgarh was known for radicalization during the Samajwadi Party rule. Now, Azamgarh will be known for education. I want to suggest to CM Yogi Adityanath to name the university being built here after Maharaja Suheldev”, he said.