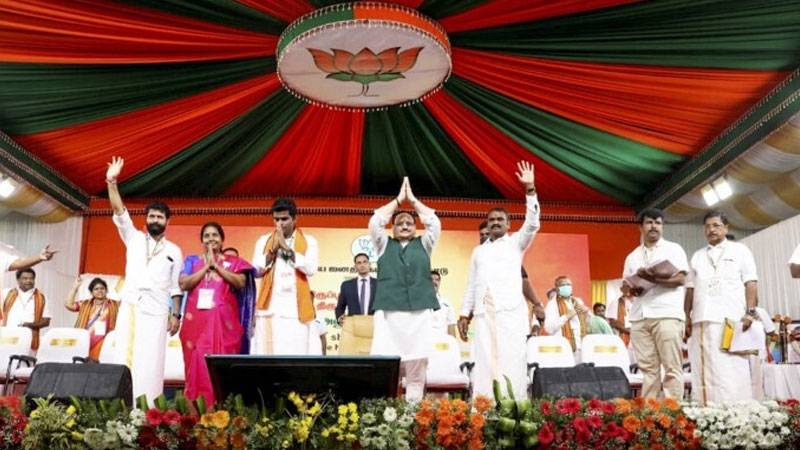 Bharatiya Janata Party National President Shri JP Nadda visited Tirupur in Tamil Nadu on 24 November, 2021. Addressing the BJP State Executive Meeting Shri Nadda said, “When I come to Tamil Nadu, I feel that the challenge is more grave because democratic institutions are being challenged and threatened. All developmental works that are being started here with the support of Prime Minister Shri Narendra Modi are being stopped. There is a process to divert the development process which might be good for family rule, but not for the people of Tamil Nadu.”

Criticizing the DMK government, Shri Nadda said the MK Stalin government was trying to throttle the cultural and sacred values of the state. They have always challenged the system. There is always an attempt to discourage and disrespect, and this is not the disrespect of Vetrivel or Lord Murugan; this is the disrespect of the cultural ethos of Tamil Nadu. We are the saviors and we have to fight it out. We stand for Tamil Nadu pride, Tamil culture and for the world’s oldest language Tamil, he added.

The BJP National President said the DMK reeked of corruption and dynasty and the only way to fight dynastic parties is to have the BJP as the alternative. “DMK and corruption, dynasty, family are synonyms. They are the two sides of the same coin. Whatever you are fighting here on the ideological issue, the challenge is nationwide. The only way to fight out the dynastic party is the alternative Bharatiya Janata Party,” he said.

Referring to criticism of the vaccination programme, BJP National President said, opposition parties were saying, it is a BJP vaccine and Modi vaccine. Now all Chief Ministers have gone through the Modi vaccine and BJP vaccine. By opposing PM Shri Narendra Modi, the leaders have opposed the nation. They have betrayed the people of this country. They have tried to create vaccine hesitancy,” he added.
Shri Nadda said the BJP wants to give the people of the state clean and transparent governance. “We want clean and transparent governance with the basic principle ‘Sabka Sath, Sabka Vikas, Sabka Vishwas, Sabka Prayas’. We have to work together for everybody. We have to take the support of everybody,” he said.