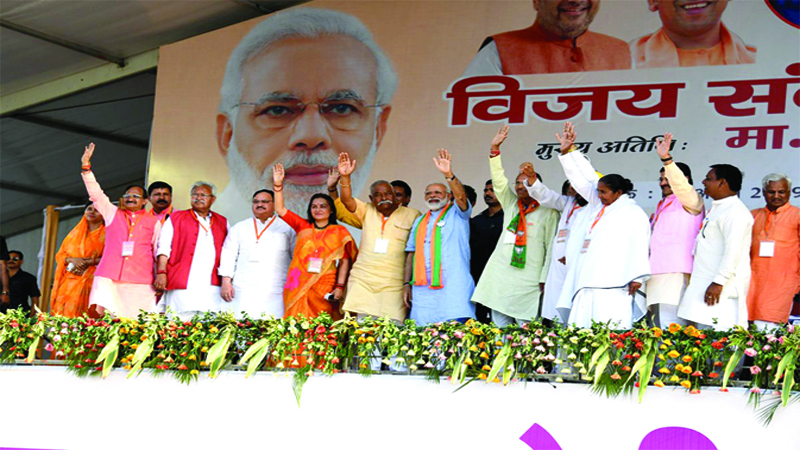 Aligarh and Moradabad in Uttar Pradesh

Enlisting the key achievements of his government since 2014, PM Shri Modi said, “Since 2014, our government made ‘Sabka Sath, Sabka Vikas’ its guiding mantra to work equally for every Indian. While we constructed millions of toilets and increased the sanitation coverage in the nation from 38% in 2014 to 98% in 2019, we also curbed high inflation and made annual income upto ₹5 lakh tax-free. While we opened bank accounts for nearly every Indian household, we also increased the MSP of farmers’ produce to one and half times their cost. So, in effect, we have devoted our five years to improve the life of every Indian without discriminating on the basis of caste, religion or economic status.”

Lashing out at the Opposition parties such as Congress, BSP and SP for their decades of neglect and apathy towards the people of Uttar Pradesh, Prime Minister Shri Modi said, “We all remember how the leaders who based their politics on the name of Dr. Ambedkar decieved his values and allied themselves with divisive politics of caste and dynasty. The people also clearly remember the time when Western UP was burning and people were forced to flee their homes and businesses. That is why the people of Uttar Pradesh stood strongly in support of the BJP in the 2014 Lok Sabha elections and said that UP wants development and not caste politics.
The same was reiterated in 2017 when the people elected a BJP government with an overwhelming majority saying they want progress and not politics of caste and appeasement. I am certain the people will again stand with us in the ongoing Lok Sabha elections and strengthen our resolve to develop Uttar Pradesh rapidly and bring back its days of glory, Shri Modi added.”

Questioning the ‘Maha-Milawat’ leaders in Uttar Pradesh, SP, BSP and Congress about their vision for the future of India, PM said, “I want to ask their leaders if they have a vision to develop India in the future. Do they plan to keep on playing their divisive politics of caste and votebank appeasement in the future too? If so, they must know that the people of Uttar Pradesh no longer trust such parties or their leaders. They want a government that works for them, that puts the ‘country-first’ instead of ‘family-first.’ That is why, the Congress and SP leaders have resorted to name-calling and call me a ‘Chowkidar of Shauchalaya’ (Keeper of toilets). But let me tell them, I am proud to have played a part in ensuring dignity and respect to millions of my sisters and daughters by building toilets for them. Such comments only show the narrow mentality of these parties and their blind hatred for Modi.
Despite being sworn enemies of each other for decades, SP-BSP have now joined hands in an opportunist alliance with the sole purpose to defeat Modi. Modi has become an existential threat to parties like SP-BSP and so they are leaving no stone unturned to defeat me. However, I have full faith in the people of my country and that they will never support such parties who have no agenda but to enrich themselves, not the people, he added.”

‘Faith and affection towards BJP only increased over time’

Urging his supporters in the southern state to vote for the BJP in the ongoing General elections, PM Shri Modi said, “The faith and affection towards the BJP and me has only increased over time. I am here to seek the blessings of the people so that we continue to transform this faith into rapid development. This is why, I urge all the eligible voters in Kerala to turn out and exercise their franchise in support of the BJP during these elections and strengthen our resolve to bring rapid development in Kerala.”

Taking on the regional rivals, the UDF and the ruling LDF for their ineffective policies and rampant corruption, PM said, “Only the BJP can ensure social justice for every group in Kerala. Everybody has seen how the UDF and LDF are threatening the traditions and religious practices of the people here while they indulge in corruption, bribery and other illegal activities. Can anyone forgive the Congress for the humiliation and suffering it gave to Mr. Nambi Narayan, whose entire career was destroyed by the false allegations of the Congress. This is the true face of these parties, they are not people-centric, they are ‘family-centric’ instead.”
He further commented on the issue of Congress President contesting elections from the seat of Wayanad in Kerala and said that the Congress party had done so because it wanted to replicate the ‘Amethi Model of Development’ in Wayanad and added that contesting from South India was not giving a message to the people of the South, it was rather about appeasing specific communities that was the main motivation behind such a decision.

Addressing the huge gathering, PM Shri Modi first paid tributes to the great son of soil, Dr. BR Ambedkar on his birth anniversary. He said, “The huge voting percentages coming out from Jammu and Kashmir reiterated the fact that the people here want to strengthen the democratic structure in the state. They have given a befitting reply to the anti-India and separatist voices as well as to the ‘Maha-Milawati’ gang who have always doubted the people’s abilties and willingness to vote for elections in India.”

He further lashed out at the Congress and its regional allies PDP and NC for forging an opportunist alliance that stands against the interests of the country and said, “The recent statements given by one of Congress’ allies here asking for a separate Prime Minister for Jammu and Kashmir reveals how this alliance goes against our country. This alliance is an alliance of opportunism and hunger for power and not to provide better opportunities of life for the people of Jammu and Kashmir.”

In this context, the Prime Minister further took potshots at the Congress for the absence of its CM in Punjab to pay respects at the official Jallianwala Bagh memorial on 13 April in which the Vice-President of India was also present and said that such actions were not only disrespectful to the martyrs of the massacre but also revealed the petty politics of the Congress leaders.

‘Petty politics of Congress goes against the aspirations of Karnataka’

Elaborating on significance of the upcoming Lok Sabha elections for the future of the country, PM Shri Modi said, “The coming Lok Sabha elections are extremely crucial as they will decide the kind of India our young generation wants for its future. These elections will decide if nationalism prevails or dynasticism will. These elections will decide the face and form of the 21st century India. This is why, I appeal to all the voters to choose their votes wisely and keep in mind the track records of those that have only given false promises and those that have actually delivered those promises.”

Launching a scathing attack on the state JD(S) government for entering into an opportunist alliance with the Congress just to remain in power, PM Modi said, “While the Opposition parties like Congress and JD(S) believe in ‘Vanshoday’ (empowering their lineage), the BJP believes and practices ‘Antyodaya’ (empowering the poor). While the former creates corruption, injustice and politics of appeasement and votebanks, the latter encourages transparency, social justice and politics of development under which India is constantly reducing its poverty levels and creating an ever-growing middle class full of aspirations and dreams. This is why the people no more put their faith on the divisive politics of the Opposition and instead stand besides the developmental agenda of the NDA.”

Looking forward, Shri Modi assured his supporters of greater engagement and policies to fulfill the aspirations of the honest tax-paying middle class in his next term.

Addressing a massive public meeting in the Maharashtrian city of Ahmednagar on 12 April, 2019 Prime Minister Shri Narendra Modi said, “The Lok Sabha elections will be decisive in charting the future course for our country, in deciding whether democracy will prevail or dynasty, whether an honest ‘Chowkidar’ will prevail or a corrupt ‘Namdar,’ whether a ‘people-centric’ government will assumed power or a ‘family-centric’ government and whether ‘Indian’ hero will prevail or ‘Pakistan’s’ sympathizers. These choices will affect the future of our country for many years to come and so I urge all the voters, particularly our young first-time voters, to exercise their franchise wisely and whole-heartedly.”

Taking on the Congress and its Maharashtrian ally, NCP for ignoring the needs of the people while pursuing own selfish interests, PM Modi said, “Each of us clearly remembers how the country was attacked by terrorists frequently when the Congress-NCP combine was in power. The memories of Mumbai and Pune attacks are still fresh in our minds. However, after 2014, the BJP-led NDA government has changed this policy of soft approach towards terrorists and as a result any terrorist attack against India is responded back strongly, hitting the terrorists where it hurts them the most. India no longer tolerates terror and its sympathizers.”

PM Shri Modi further lashed out at the Congress for its endemic corruption and numerous scandals and said, “The entire country saw recently how the latest scandal of the Congress, ‘Tughlaq Road Chunavi Ghotala’ unfolded and huge amounts of illegal cash was found with senior Congress officials. The nation no longer trusts the Congress and stands firmly with the BJP in its resolve to eradicate corruption from India’s governance, he said.

Congress neglected the North-East for decades

Addressing two huge public meetings in Mangaldai and Silchar in the North-Eastern state of Assam on 11 April Prime Minister Shri Narendra Modi said, “Subsequent Congress governments in the past hindered the North-East’s development and delayed infrastructural projects which led to a stagnation of the local economies. However, we are changing this culture of policy-paralysis and are leaving no stone unturned to ensure that promising states like Assam catch up with the rest of the country and our North-East region prospers like the rest of India does.”
Questioning the Congress policy towards India’s national security on sensitive areas from Kashmir to Assam, the PM said, “After the 1971 war, Congress had the opportunity to solve the issues of internal security from Kashmir to Assam but they did nothing about them.

‘Bihar witnessed a change since the NDA and BJP assumed power’

“Over the years, people of Bihar saw the power of the politicians increase rapidly while the people remained helpless. However, Bihar has witnessed a change in this culture since the NDA and BJP governments assumed power in the state and centre respectively. Our politics is ‘people-centric’ and we have spent our terms empowering the most vulnerable and poor sections of society by providing them complete access to basic necessities like sanitation, electricity and clean cooking fuel said Prime Minister Shri Narendra Modi while addressing a massive public meeting in Bhagalpur, Bihar on 11 April.

PM Shri Modi also spoke at length about the radical shift in India’s national security strategy under the BJP saying, “The whole nation remembers the times when the Congress was in power and terrorist attacks had become very common across the country. Yet despite all this, India took a soft approach against the terror sponsored by Pakistan under the Congress rule. I changed this policy and decided that any attack against us will be responded back in the same language, he said.”