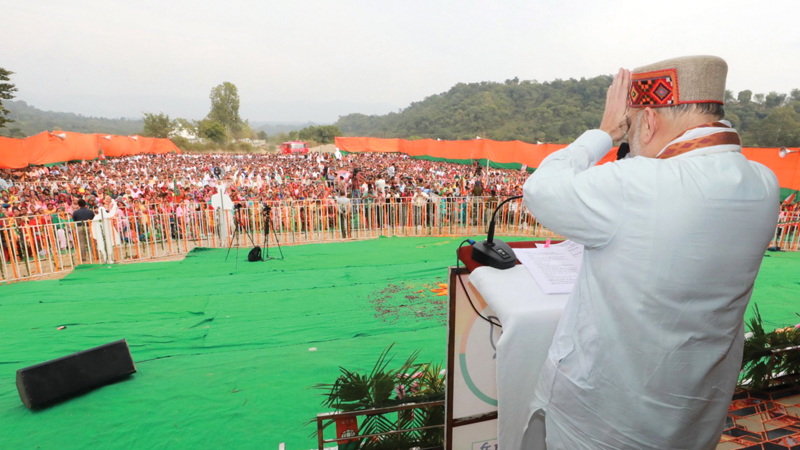 The BJP will win both the lower and upper parts of Himachal Pradesh, Union Home Minister Amit Shah said on 06 November, 2022 ahead of the Assembly polls on November 12. During an election rally in Kangra, Shri Shah said the state is divided into upper and lower Himachal. While Mandi, Kullu, Shimla, Solan, Kinnaur, Lahaul-Spiti, Sirmaur and Chamba form upper Himachal, the lower parts of the state comprise Chamba, Una, Kangra Bilaspur and Hamirpur. “This time, BJP will win in both the parts,” Shri Shah said.

Taking a swipe at the poll guarantees given by the Congress in its manifesto he highlighting the Congress massive corruptions during the tenure of UPA led Congress. Therefore, Shri Shah said, the BJP will trounce the Congress this time in its bastions and sweep the state with a big margin.

The Home Minister also made a mention of the development work and government initiatives like Health care scheme and Jal Jeevan Mission to ensure safe drinking water.

Union Home Minister Shri Amit Shah, who is on the campaign trail in Himachal Pradesh, on November 02, 2022 hit out at the opposition Congress for corruption. Shri Shah said that during the 10-year rule of the Congress-led United Progressive Alliance, “there were so many scams that counting them was difficult”. “During the BJP rule, however, you won’t find a single scam,” he added.

Shri Shah further said Himachal Pradesh had been Prime Minister Shri Narendra Modi’s “Karmabhoomi” and that maximum development had taken place in the state during the BJP regime.