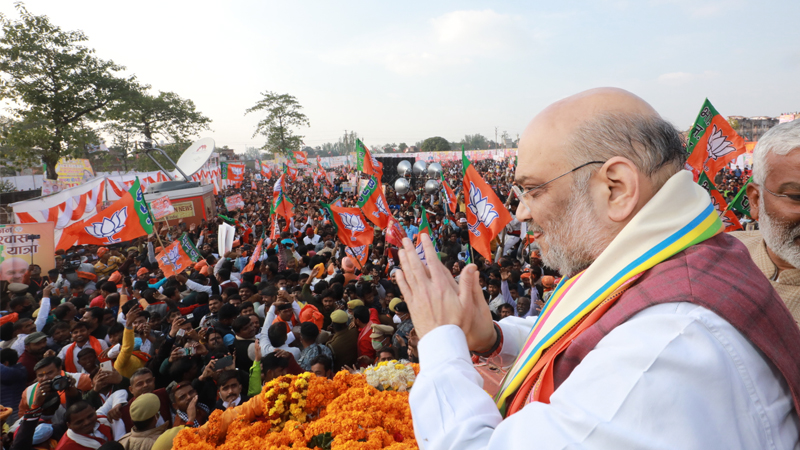 Union Home Minister Shri Amit Shah targeted the Congress, who he said got support from Akhilesh Yadav. “Till 10 years, the Sonia-Manmohan Singh government was at the Centre with support from the Bahujan Samaj Party (BSP) and the Samajwadi Party (SP). Often many Alia, Malia, Jamalia used to enter India and behead our soldiers. Yet, then PM Manmohan Singh couldn’t do anything about it,” Shri Shah said at a public rally in Rae Bareli, Uttar Pradesh on 19 February, 2022.
Referring to the Pulwama attack, he said that when the incident happened, “they thought the BJP government would also react in the same way as former governments did in the past”. “However, Prime Minister Shri Narendra Modi took on the terrorists at their homes by conducting surgical strikes,” he added.

The Home Minister further stated that since chief minister Yogi Adityanath took charge in Uttar Pradesh, there are no longer any “bahubalis” in the state, but only “bajarangbali”. The BJP had come under criticism from the opposition over scrapping of Article 370 in Jammu and Kashmir but the move had been very successful, he said.

Shri Shah said that before the BJP, households in Uttar Pradesh were not getting electricity throughout the day. “Since the BJP came in power, all households get 22-24 hours of electricity,” he added, highlighting that this is the type of development work that the BJP has done in Uttar Pradesh.
He said following the BJP’s arrival in the state, dacoity in the state has decreased by 72%, looting by 62%, murder by 31%, and rapes by 50%.