In a huge step towards making its mark in the North-East region, the Bharatiya Janata Party on 12 June, 2022 won all the 26 seats in the Karbi Anglong Autonomous Council (KAAC) in Assam, while Congress drew a blank. The elections for the 26 seats were held on 08 June. 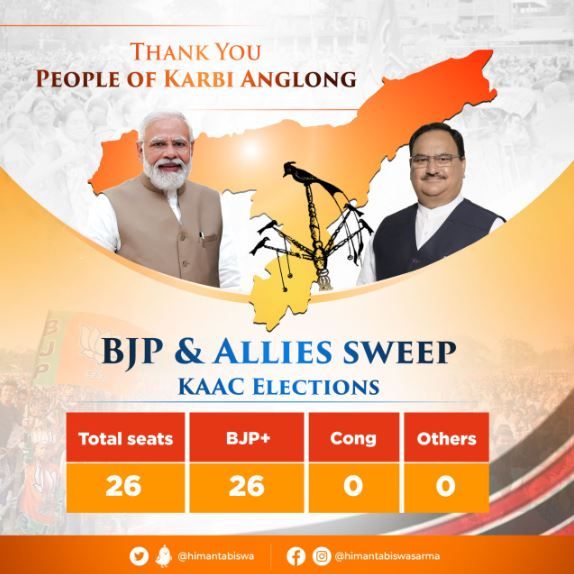 Prime Minister Shri Narendra Modi hailed the thumping victory of the BJP and assured people that the party would keep working for Assam’s progress. “Historic results in Karbi Anglong! I thank the people for their continuous faith in BJP and assure them that we will keep working for Assam’s progress,” Shri Modi tweeted. “The efforts of BJP karyakartas have been outstanding. Kudos to them,” he said.
BJP National President Shri Jagat Prakash Nadda said, “Congratulations to all @BJP4Assam party members and karyakartas for this brilliant victory in the KAAC polls. This is a result of the faith of the people in the vision of Hon. PM Shri @narendramodi and the hard work of our karyakartas. Thank you to the people for this mandate”.

Chief Minister Shri Himanta Biswa Sarma said, “We bow before the people of Karbi Anglong for giving BJP a historic mandate in KAAC polls the second time in a row.” After wins in urban body and GMC polls, this huge victory is a true affirmation of public trust in PM Shri Narendra Modi’s vision of ‘Sabka Saath Sabka Vishwas’, Shri Sarma said.

Noteworthy, the election for KAAC was held for the first time after the signing of a peace agreement with five insurgent groups of Karbi Anglong district in September 2021. After this historic initiative of Modi government of the ‘Karbi Anglong Agreement’ last year, over 1,000 militants surrendered and a ‘Special Development Package’ of Rs 1,000 crore for the Karbi areas was announced.