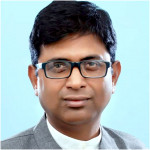 In the union budget 2020, a special provision of Rs 3 lakh crore has been made for agriculture and allied sectors. This shows the seriousness of the Modi government to its promise of doubling the income of farmers by 2022. Prime Minister Modi is constantly working towards the aim of increasing farmers’ income by adopting the new ways.

In this budget, the new provision made to increase the income of farmers ensures that we are not very far away from achieving the goal of doubling the income of farmers. Under this unique initiative solar plants will be installed on the vacant land of farmers and these solar-plants will be connected to the national power grid. Apart from this, solar power pumps will be provided to the farmers. They will also be connected to the national grid, so that the power generated in the free time will be used by the country. With this the farmer can now also become ‘Urjadata’ along with ‘Aandata’. To achieve this aim, the work of giving off-grid solar pumps to 20 lakh farmers and on-grid solar pumps to 15 lakh farmers will be done during the current financial year. Apart from this, allocation of 75 thousand crores has been made for Prime Minister Modi’s ambitious Kisan Samman Nidhi Yojana. With this, it will be ensured that farmers will continue to get Rs 6000 annually in their account. This scheme is vital in increasing the income of farmers.

It is also  aimed to increase the production of fish with the help of Sagar Mitra scheme in coastal states. The government is hopeful that by 2023, fish production will double and fish exports will reach by Rs 1 lakh crore. Production of Vegetable and fruit in the country has increased to more than 311 million metric tons which is actually more than the grain production in the country. But, due to lack of proper management, it rots and non-availability leads to inflation.

To tackle this problem, the government has taken up an ambitious project to build cold storage chains across the country. This will be accomplished with the help of Food Corporation of India. By achieving this products like fruits and vegetables can be stored and sold for a long time. Farmers will be largely benefited with this and they will not be compelled to sold their produce in hurry which certainly increase their income.

To facilitate faster and safer transportation of fruits, vegetables, meat and fish across the country, Kisan Udaan and Kisan Rail services have also been announced. This will facilitate the farmers to transportation their produce across the country. A special attention will be given to the development of these facilities in the North Eastern states. So it will be ensured that the famers from these states smoothly transport their goods in the different part of the country. A target has also been set to double milk processing capacity by 2025. The goal of eradication of diseases in livestock is also set and deadline to achieve the target is year 2025. Government believes that the livestock and dairy industries will play a big role in boosting the income of the country’s farmers.

This budget aims to the give special attention to those 100 districts which are facing water scarcity crisis. For such areas, drip irrigation technique will be encouraged under Prime Minister Irrigation Project. This technique not only saves the water but also saves the valuable energy. With decreasing consumption of water after adopting this technique,it is evident that water levels will start rising.

By connecting the agricultural mandis of the entire country with the internet, more than 6 crores farmers associated with it are getting benefit. The Prime Minister’s ambitious e-NAM scheme has helped farmers in the country to get equal and good prices of their produce. With the increasing use of technology, it is emerging as a reliable platform for selling the product of the farmers. All these efforts of the Modi government can certainly be expected to double farmers’ income by the year 2022.