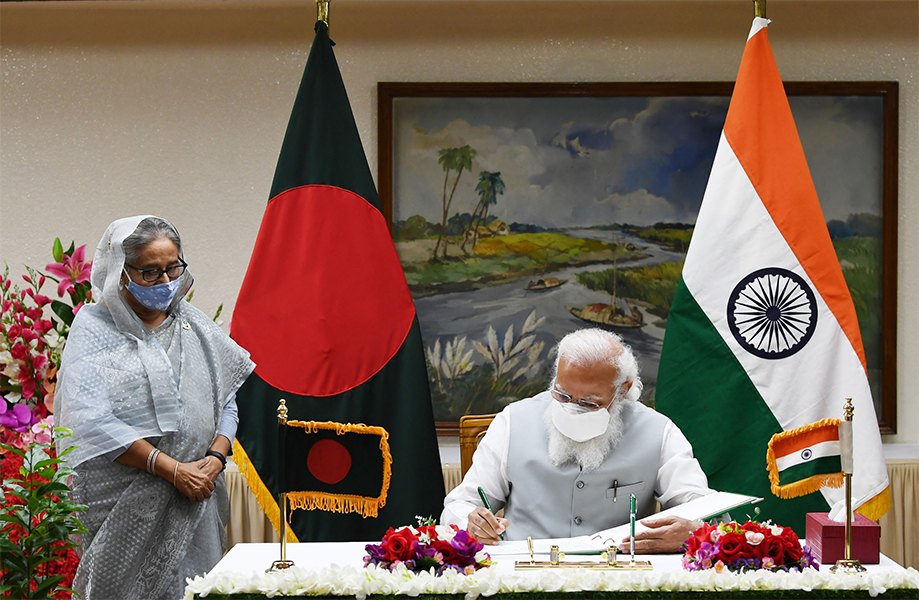 During the recent visit of Prime Minister Shri Narendra Modi addressing the 50th Bangladesh National day Programme, he said that one of his first protests was for the freedom of Bangladesh, for which he was even sent to jail. “I must have been 20 to 22 years old when me and my colleagues did a Satyagraha for the freedom of the people of Bangladesh,” he said at the event. “I tell this to the people of Bangladesh with great pride.”  Times of India reported in August 1971, “120 buses were kept ready to transport to Delhi’s National Stadium where they were tried by nine magistrates. The mammoth rally was addressed by party president Atal Bihari Vajpayee who declared that the Indo-Soviet joint statement implied a conspiracy between Delhi and Moscow to deny recognition to Bangladesh”. The arresting of the Satyagrahis led by Jana Sangh was made in almost every state. 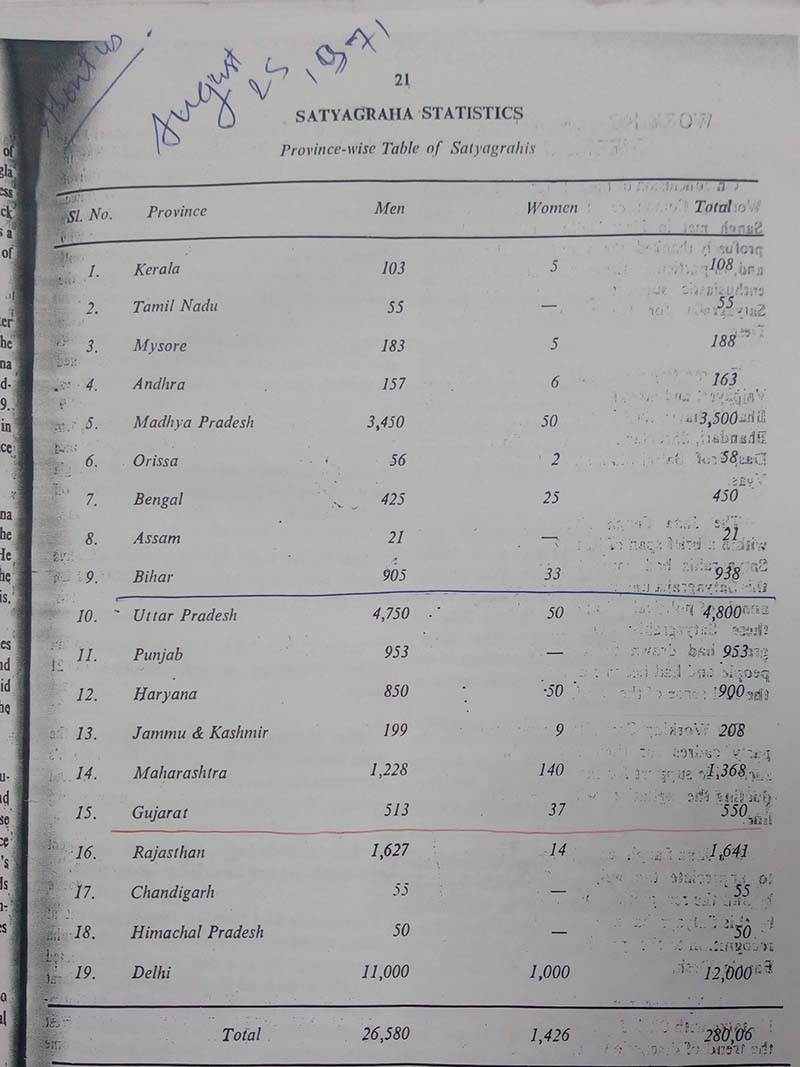 The Pakistani military launched genocide against nationalist Bengali civilians, students, intelligentsia, religious minorities and armed personnel through its operation searchlight on the night of 25 March, 1971 in East Bengal (Now Bangladesh). The Pakistani military raped and killed the masses including massacre in Dhaka University. As a result of the genocide, around eight to ten million people, mostly Hindus fled the country to seek refuge in neighboring India.

During the Pakistani attacks, East Bengal (Bangladesh) Civilians took control of arms depots in various cities and began resisting Pakistani forces with the acquired weapons supply. Chittagong experienced heavy fighting between rebel Bengali military units and Pakistani forces.  Amidst the war, the Bangladeshi Declaration of Independence was broadcast from Kalurghat Radio Station in Chittagong by Major Zia ur Rahman on March 27, 1971. With the intervention of Indian military the Pakistanis surrendered on 16 December, 1971.

Meanwhile, the Provisional Government of Bangladesh was formed in mid April 1971 in Mujibnagar and moved to Calcutta as a government in exile.

The Indian government led by Smt. Indira Gandhi was making delay in recognizing the provisional government of Bangladesh under the pressure from big powers.

In 1971 Jana Sangh (Now BJP) organized Satyagraha in the month of August  across the country to put pressure on Indira Government to recognize Bangladesh as a separate country.

Jana Sangh mouth piece ‘About us’ in its  edition of August 25,1971 reported that from 1st August,1971 to 11th August,1971, Jana Sangh carried out Satyagraha across the country. This Satyagraha put pressure on the Indian government to recognize Bangladesh as a separate country. 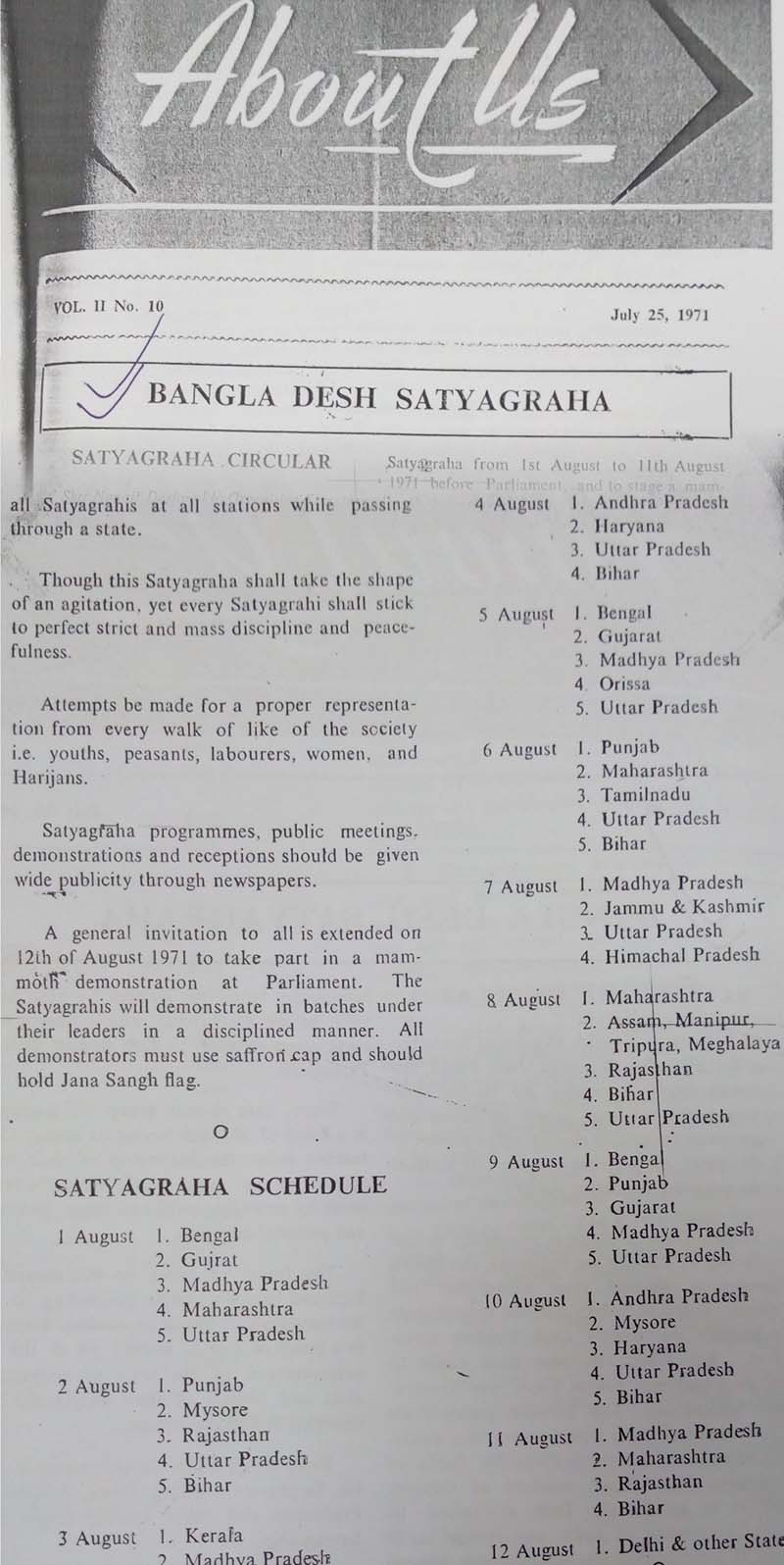 The Jana Sangh questioned   the Indian government that initially it showed great enthusiasm about Bangladesh, but why it was retreating then. Atal Bihari Vajpayee doubted that the story of Tibet might be repeated in Bangladesh’s situation. Lama and refugees remained in India and China took the Tibet. He alleged that   Tibet was betrayed  to keep China happy. Bangladesh might be betrayed to please America and Russia. 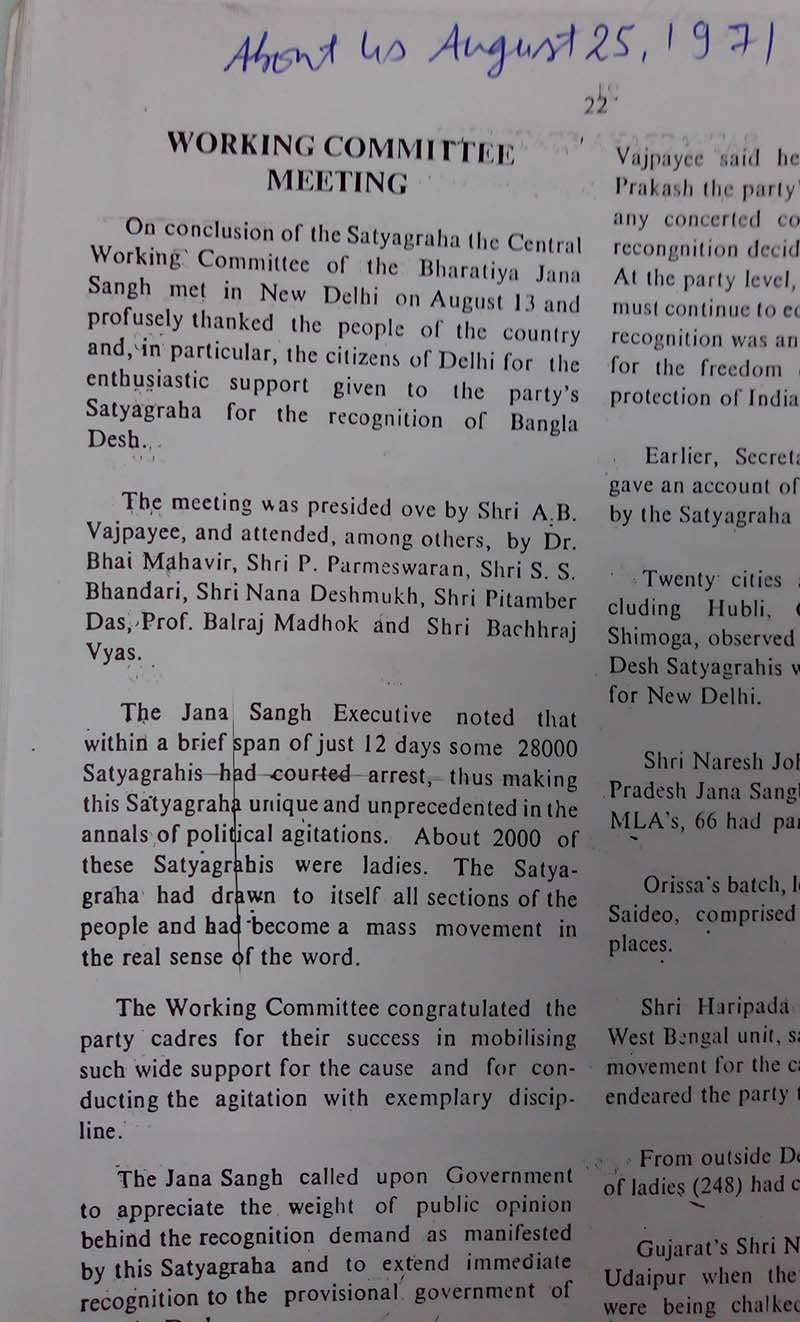 Shri Vajpayee urged that the Indian government should help Bangladesh in every way. Atal Bihari Vajpayee said, “This is not a possibility of war. Even if there is war, we should be ready for it.” Atalji added that the Satyagraha of Jana Sangh was to strengthen the government not for the weakening. Because, most Hindus were the targets of atrocities of Pakistanis there.

Jana Sangh’s All India Organization Secretary, Shri Nana Ji Deshmukh gave a statement in this regard on July 27, 1971 that Mrs. Indira Gandhi had promised to support Bangladesh. Why was she not recognizing Bangladesh and working in that direction? Why was Pakistan being given time to commit genocide in Bangladesh?

A total of 28 thousand Satyagrahis had courted arrest from all over the country on the issue of Bangladesh. Satyagrahis had taken out demonstration in every state. 550 Satyagrahis in Gujarat had courted arrest. Out of 550, 513 were males and 37 females. These Satyagrahis had come from about 80 places in Gujarat were very disciplinary and peaceful. At the end of Satyagraha, on 13 August 1971, Atal ji thanked the party cadres to mobilize mass  support for the cause. The  BJS called upon government to appreciate the weight of public opinion behind the recognition demand as manifested by this Satyagrah.  At the all-party meeting convened by Shri Jayaprakash Narayan, Shri Atal Bihari Vajpayee also said that his party would continue to tell people why Bangladesh’s independence was important and how it was in India’s interest.