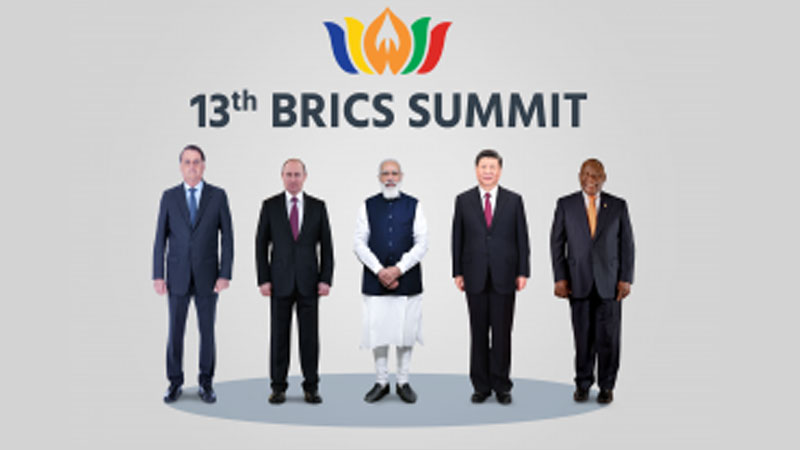 Prime Minister Shri Narendra Modi chaired the 13th BRICS Summit virtually on 9 September. The theme of the Summit, chosen by India, was, BRICS@15: Intra-BRICS Cooperation for Continuity, Consolidation and Consensus. The Summit saw the participation of all other BRICS Leaders – President Jair Bolsonaro of Brazil, President Vladimir Putin of Russia, President Xi Jinping of China, and President Cyril Ramaphosa of South Africa.

Highlighting the leading role that BRICS countries can play in the post-COVID global recovery, Prime Minister called for enhanced BRICS cooperation under the motto of ‘Build-back Resiliently, Innovatively, Credibly and Sustainably’.

• Prime Minister expressed his appreciation for the cooperation received from BRICS partners during India’s Chairship this year.
• BRICS platform has witnessed several achievements in the last one and a half decades.
• Today we are an influential voice for the emerging economies of the world: PM
• BRICS has created strong institutions like the New Development Bank, the Contingency Reserve Arrangement and the Energy Research Cooperation Platform.
• We have adopted the BRICS Counter Terrorism Action Plan.

Elaborating on these themes, Prime Minister stressed the need for accelerating ‘build-back’ by enhancing speed and accessibility of vaccination, creating ‘resilience’ by diversifying pharma and vaccine production capacities beyond the developed world, fostering ‘innovation’ by creatively using digital tools for public good, ensuring reform of multilateral institutions to enhance their ‘credibility’, and promoting ‘sustainable’ development by articulating a common BRICS voice on environmental and climate issues.

The leaders also discussed important regional and global issues, including recent developments in Afghanistan. There was convergence of views on the threat posed by growth of terrorism and extremism, and all BRICS partners agreed to accelerate implementation of the BRICS Action Plan on Counter-Terrorism.

At the conclusion of the Summit, the leaders adopted the ‘New Delhi Declaration’.