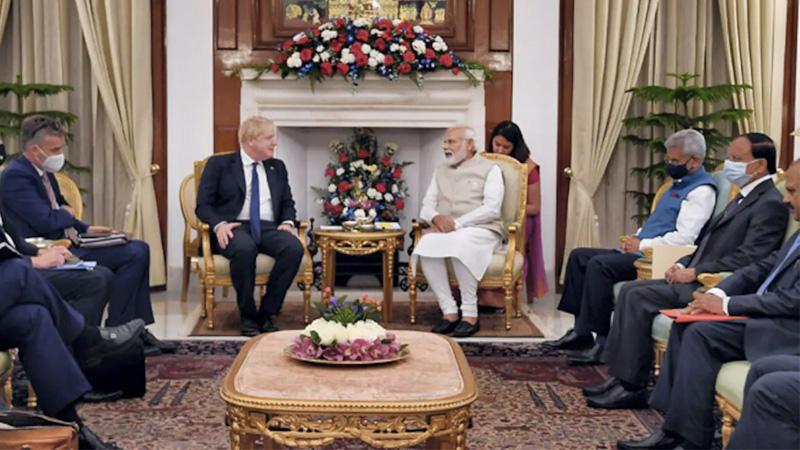 The British Prime Minister Mr. Boris Johnson was in India for two days (April 21-22). During their meeting on April 22, Prime Minister Shri Narendra Modi and Johnson decided to expand India-UK defence collaboration, including joint production and co-development of fighter jets and next-generation jet engine technology, to give a boost to the two countries’ comprehensive strategic partnership, which was announced last year.

“Both countries’ teams are working on the subject of the Free Trade Agreement.” The negotiations are making good progress. And we have decided to make every effort to complete the FTA by the end of this year,” Shri Modi said.

“We have also agreed to strengthen cooperation in the defense sector,” Shri Modi added. We welcome the United Kingdom’s support for ‘Atmanirbhar Bharat’ in all areas of manufacturing, technology, design, and development in the defence sector.”
India a “stunning and shining” country: PM Johnson

The British Prime Minister, referring to India as a “stunning and shining” country, stated that the two countries would increasingly collaborate to strengthen each other’s domestic defence industries. He announced a “open general export licence” to facilitate technology transfer, allowing Indian defence firms to participate in the United Kingdom’s aviation and naval shipbuilding programmes.

“Our new and expanding defence and security partnership will enable India to strengthen its own domestic defence industry as well as protect vital shared interests in the Indo-Pacific,” Johnson said at a press conference before leaving for the UK.
According to the British PM, India and the UK should constantly focus on “sticking together and confronting our shared anxieties on autocratic coercions around the world, and act together to make our countries safe and more prosperous.”

“India is an incredible rising Asian power, with one of the world’s fastest-growing economies… “India is also our most important partner in the Indo-Pacific, which is becoming the world’s geopolitical centre,” he added.

He also stated that the two countries’ national security advisors (NSA), defence, and foreign ministers would meet in a rolling programme to kickstart all projects.