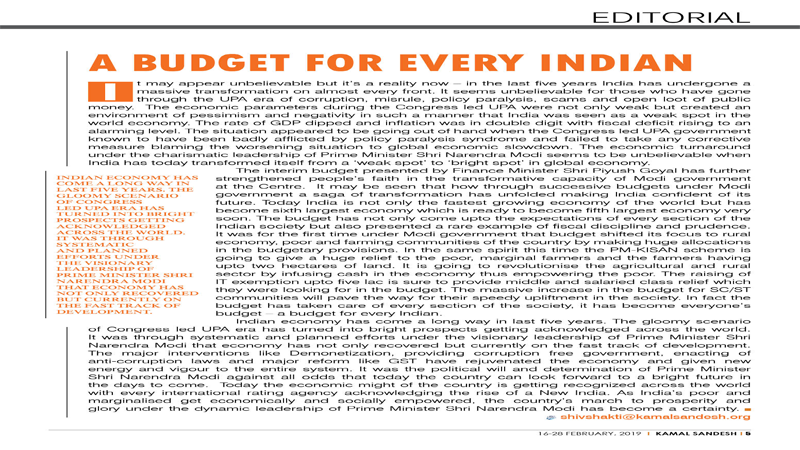 It may appear unbelievable but it’s a reality now – in the last five years India has undergone a massive transformation on almost every front. It seems unbelievable for those who have gone through the UPA era of corruption, misrule, policy paralysis, scams and open loot of public money. The economic parameters during the Congress led UPA were not only weak but created an environment of pessimism and negativity in such a manner that India was seen as a weak spot in the world economy. The rate of GDP dipped and inflation was in double digit with fiscal deficit rising to an alarming level. The situation appeared to be going out of hand when the Congress led UPA government known to have been badly afflicted by policy paralysis syndrome and failed to take any corrective measure blaming the worsening situation to global economic slowdown. The economic turnaround under the charismatic leadership of Prime Minister Shri Narendra Modi seems to be unbelievable when India has today transformed itself from a ‘weak spot’ to ‘bright spot’ in global economy.

The interim budget presented by Finance Minister Shri Piyush Goyal has further strengthened people’s faith in the transformative capacity of Modi government at the Centre. It may be seen that how through successive budgets under Modi government a saga of transformation has unfolded making India confident of its future. Today India is not only the fastest growing economy of the world but has become sixth largest economy which is ready to become fifth largest economy very soon. The budget has not only come upto the expectations of every section of the Indian society but also presented a rare example of fiscal discipline and prudence. It was for the first time under Modi government that budget shifted its focus to rural economy, poor and farming communities of the country by making huge allocations in the budgetary provisions. In the same spirit this time the PM-KISAN scheme is going to give a huge relief to the poor, marginal farmers and the farmers having upto two hectares of land. It is going to revolutionise the agricultural and rural sector by infusing cash in the economy thus empowering the poor. The raising of IT exemption upto five lac is sure to provide middle and salaried class relief which they were looking for in the budget. The massive increase in the budget for SC/ST communities will pave the way for their speedy upliftment in the society. In fact the budget has taken care of every section of the society, it has become everyone’s budget – a budget for every Indian.

Indian economy has come a long way in last five years. The gloomy scenario of Congress led UPA era has turned into bright prospects getting acknowledged across the world. It was through systematic and planned efforts under the visionary leadership of Prime Minister Shri Narendra Modi that economy has not only recovered but currently on the fast track of development. The major interventions like Demonetization, providing corruption free government, enacting of anti-corruption laws and major reform like GST have rejuvenated the economy and given new energy and vigour to the entire system. It was the political will and determination of Prime Minister Shri Narendra Modi against all odds that today the country can look forward to a bright future in the days to come. Today the economic might of the country is getting recognized across the world with every international rating agency acknowledging the rise of a New India. As India’s poor and marginalised get economically and socially empowered, the country’s march to prosperity and glory under the dynamic leadership of Prime Minister Shri Narendra Modi has become a certainty.