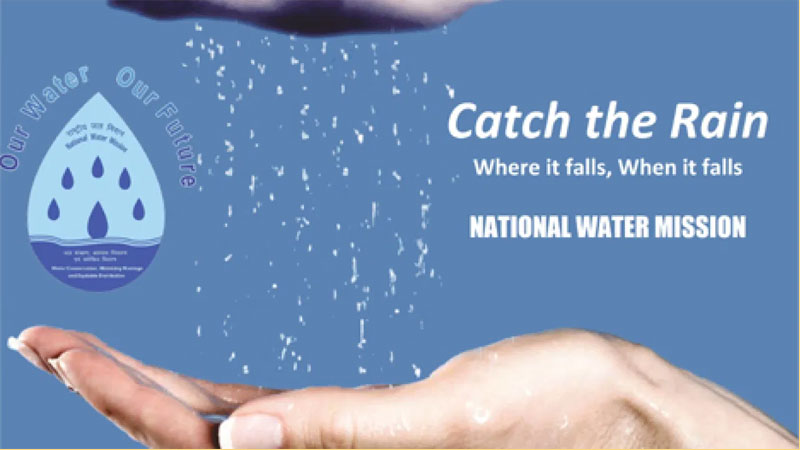 As a child, onset of monsoons brought succor from the dry and harsh summers. Playing outdoors was no less than walking on a clay oven often giving blisters on feet. The Village ponds used to dry up denying children of their unassailable right of diving into the water with their accomplice – the domestic cattle.

Come Monsoons and the entire landscape changed. The first rains brought with it water for crops, village ponds, wells and most importantly – hope for the farmers. The importance of rains can be appreciated with the fact that 60% of our farmers covering 55% of gross cropped area are dependent on Rain water for irrigation purposes. Besides, rain-fed areas support 64 per cent of cattle, 74 per cent of sheep and 78 per cent of goat population in the country.

Therefore, preparing for Monsoons was a sacred ritual for the entire village. Ponds were de-silted and cleaned through collective efforts. Fields were appropriately prepared with bunds. But for us children, feeling the trickle of rainwater on our palms and “Catching the Rain” in it, gave unparalleled joy.

Diving into our rich history, we discover that it is replete with marvelous structures of storage and irrigati on tanks which were built primarily to cope with seasonal fluctuations in water availability. They are called by distinct local names like bawri, Baoli, Bavadi, Vav (Gujarati), Pushkarani (Kannada), Barav (Marathi) etc. The earliest known structures dates back to 2500 BC as cylindrical brick-lined wells and ‘Great Bath’ were reported at Mohenjodaro site under the Indus Valley civilization. First Ghats were built in northern India around 100 AD. Many of these structures exhibit complex engineering skills and are even known to have withstood several earthquakes. The existing Bawris of Kalka and Taals of Morning hills in my parliamentary constituency were reportedly used by Pandavas during the exile period.

We live in a different era now. We need water both for our personal as well as developmental needs. With burgeoning population, our overall requirement of water has increased manifold. A majority part of this need is catered by extracting ground water. As per a World Bank report, India is more dependent on water pumped from aquifers than any other nation — it accounts for about a quarter of global demand for groundwater. Roughly 80 percent of India’s 1.35 billion residents depend on groundwater for both drinking and irrigation.

Indiscriminate use of ground water and depleting ground water levels pose a serious threat to sustainable development of our nation. As per UNEP report,” it is estimated that around 1.8 billion people will live in water scarce areas and about 2/3rd in water stressed areas by 2050.

The uncertainties induced by climate change are further aggravating the problem of water scarcity. There is a close interdependency between freshwater ecosystems and human well being. The Millenium Ecosystem Assessment found that 60% of the ecosystems assessed were in Global decline,particularly the aquatic ones, with detrimental effects to human well being. Therefore, effective water management by uccessfully tapping rain water is required to replenish our ground sources as well as to support aquatic ecosystems.

Our country is home to 18% of global human population but has only 2% of land mass and 4% of global freshwater resources. India receives, on an average, around 1170 mm annual rainfall. 80-90% of it is received during the Monsoons. Therefore, tapping rainfall becomes an absolute necessity.

As per a study report, even if half of the rainfall is captured, every village in India will be able to meet its own domestic water needs (R Agarwal et al,2001). Another study (UN-Habitat & Govt of MP) mentions that Roof top rainwater harvesting, for a plot size of 250 sq m, saves water (50 litres per person per day) for a family of 5 throughout the year.
Realizing the imminent need to tap rain water, the Modi Government started a Jal Shakti Abhiyan (JSA) in the year 2019 covering 256 water stressed districts of the Nation. This was a first of its kind campaign where a team of technical experts from CWC and CGWB, led by a Joint secretary rank officer, visited field formations to sensitize local authorities about tapping rain water. The results were overwhelming as successful interventions were made for rejuvenating existing water bodies and for harvesting roof top rain water.

Now, the Honorable Prime Minister, on 22nd March 2021, has launched a Nationwide campaign (JSA-2) Jal Shakti Abhiyan 2 titled as – Catch the Rain : where it falls, when it falls. Our aim is to leverage all big sized Public and Private enterprises to coordinate their actions in this direction. Our Ministry has requested Ministry of Defence, Railways, Airports authority of India, all PSUs, Public sector Banks, Universities etc to join hands for ‘Catching the Rain’.

A campaign of this scale cannot succeed without tapping the vibrant energy of our youth. To make them an important stakeholder, a dedicated cadre of Nehru Yuva Kendra has been roped in to carry a robust awareness generation programme in almost 623 districts. Training has already been accorded to 700 State/District level NYKS coordinators and around 29 lac people have so far participated in activities organized through them. Team of officials shall shortly visit the field formations to guide & handhold them. This time, an effort shall be made to geo-tag all the existing water bodies,ponds etc for better mapping and planning. With these sincere efforts supported by public participation, I am confident that soon we will be able to transform “Jal” aandolan into a “Jan” aandolan.

The RigVeda, terms “Parjanya” (cloud), son of heaven, as the bestower of Rains on earth which in turn is responsible for germinating the seed of life on this planet.
With JSA-2, let’s collectively ‘Catch the Rain’ for sustaining life as well as livelihoods. In fact, what we tried with our palms during childhood days, needs to be scaled up with the help of technological intervention and public participation.

(The writer is Union Minister of State Jal Shakti, GoI)