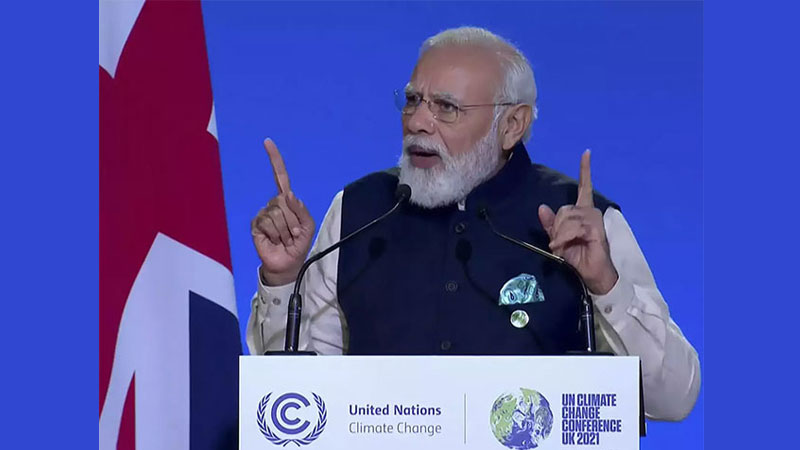 After G20 summit PM Shri Narendra Modi attended CoP-26 Summit in Glasgow. Here, Prime Minister Shri Narendra Modi addressing the event on ‘Action and Solidarity-The Critical Decade’ at COP26 Summit in Glasgow on 1st November said that Adaptation did not not get as much importance in the Global climate debate as Mitigation. He added that this is an injustice to developing countries, which are more affected by climate change.

“Climate is a major challenge for farmers in most developing countries, including India – the cropping pattern is changing, crops are being destroyed by untimely rains and floods, or frequent storms. From drinking water sources to affordable housing, all of these need to be made resilient against climate change. PM said “I have three views in this context. First, we have to make adaptation a key part of our development policies and projects. Projects like ‘Nal se Jal’- Tap water for all, ‘Swachh Bharat’- clean India Mission and ‘Ujjwala’- clean cooking fuel for all in India, have not only provided adaptation benefits to our needy citizens but have also improved their quality of life. Secondly, many traditional communities have adequate knowledge of living in harmony with nature.” Third, the methods of adaptation may be local, but backward countries should get global support for them.”

Prime Minister Shri Narendra Modi on 2nd November launched the Initiative for the Resilient Island States (IRIS) for developing infrastructure of small island nations. He said that it would give a new hope, a new confidence and satisfaction of doing something for the most vulnerable countries. The launch event was also attended by Australian Prime Minister Scott Morrison and UN Secretary-General Antonio Guterres.

Shri Modi congratulated the Coalition for Disaster Resilient Infrastructure CDRI for the initiative and said for him the CDRI or IRIS is not just about infrastructure but it is part of a very sensitive responsibility of human welfare. “It is the collective responsibility of all of us towards mankind,” he said. “It is, in a way, a shared atonement for our sins.” “The last few decades have proved that no one is untouched by the wrath of climate change. Whether they are developed countries or countries rich in natural resources, this isa big threat to everyone,” Shri Modi said.

Prime Minister Shri Narendra Modi on 2ndNovember addressed COP26 on ‘Accelerating Clean Technology Innovation and Deployment’. Speaking at the session PM Modi said, “Today, you are all welcome at the launch of ‘One Sun, One World, One Grid’. With the initiatives from the International Solar Alliance and the UK’s Green Grid Initiative, my many-year-old vision of ‘One Sun, One World, One Grid’ got a concrete shape today. The industrial revolution was fuelled by fossil fuels. Many countries have prospered by the use of fossil fuels, but our earth, our environment have become poor. The race for fossil fuels also created geo-political tensions. But today technology has given us a great alternative.”

PM said, “I am confident that the synergy of One Sun: One World: One Grid and Green-Grid Initiatives will lead to the development of a cohesive and robust global grid.” “I also want to inform today that our space agency, ISRO is going to present a solar calculator application to the world. With this calculator, the solar power potential of any place in the world can be measured based on satellite data. This application will be useful in deciding the location of solar projects and will also strengthen ‘One Sun, One World, One Grid’.”

Bilateral meetings on sidelines of COP-26 in Glasgow