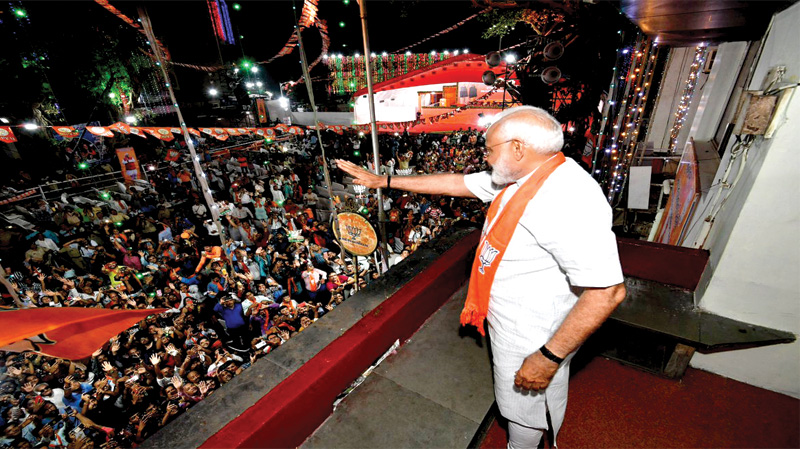 After the humongous victory of the BJP in the Lok Sabha elections PM Shri Narendra Modi addressing a public meeting on May 26, 2019 in Ahmedabad, Gujarat said that the state’s citizens had always been very special for him.
Reminiscing old days, Shri Modi said, “I am coming back to the land that has nurtured me. I am back to a place with which I have a very old bond. It is from the BJP office here in Khanpur that I learnt the Sanskars of a Sangathan. I remember coming among you all in 2012, after our party was blessed with the people’s mandate.”

Highlighting about the BJP led NDA’s victory in the Lok Sabha polls, PM Shri Modi said, “After sixth phase of polling itself I had said that it’s 300 plus for us. When I said it, people mocked me. But, the results are for everyone to see. It is historic to see such a big mandate being given. The people had decided that they want a strong government again.” Shri Modi further added that the vote in 2019 was a pro-incumbency vote and a positive vote.

Shri Modi said that within the first three days of campaigning he was convinced that it wasn’t the BJP or NDA fighting the elections but the people of India, who were at the forefront of the campaign. “This big mandate brings big responsibilities. It is important to remain humble and grounded in the wake of such a massive win,” he added further.

Encouraging the Karyakartas, Shri Modi stated, “We have to utilize these five years to solve issues of the common citizens. These have to be five years of all-round development. We have to further enhance India’s position at the world stage…The coming five years have to be years of Jan Bhagidari and Jan Chetna.”

The PM Narendra Modi also expressed his deep anguish on the recent fire tragedy in Surat and said, “The fire tragedy in Surat has saddened us all. We stand in solidarity with the bereaved families. May Almighty give them strength in this hour of grief. The State Government is further strengthening disaster management infrastructure across Gujarat.