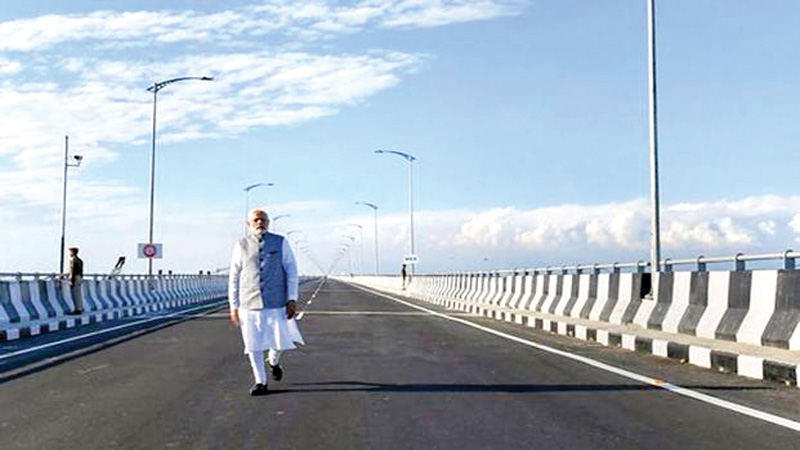 The Modi Government’s ‘Act East’ policy comprises of a big push towards the road, railway, air connectivity, and related infrastructure initiatives to boost the Northeast’s holistic development. The government’s initiatives significantly contribute to bringing the region to the mainstream of India’s development and ensure inclusive growth.
The major milestones in paving the path of all-round development of Northeast region are as fallows;

3-There has been great emphasis on air connectivity in the region. Under the UDAN scheme, Northeast is a priority region. 92 new routes will be opened under UDAN making the dreams of more air travel in the Northeast a reality.

4- Many airports are being developed or upgraded. The aviation projects in the Northeast include newly operational airports in Sikkim, Arunachal Pradesh, besides other works at Silchar, Lilabari, Rupsi, Agartala, Dimapur, Shillong and Tura.

5- Recently, the airport at Pakyong, in Sikkim, was operationalized.

6-  The state of Arunachal Pradesh is about to have its first greenfield airport operationalized which will deepen its connectivity with the rest of the country, especially the metro cities.

7- As recently as May 2018, the state witnessed its first commercial flight landing at Pasighat airport.

8- The government has ensured allocation of Rs 3,400 crore for the upgradation of airports in the Northeast region.

9- Projects worth Rs. 934 crore have already been completed while the rest are in the various stages of implementation.

10- The aviation projects in the Northeast include newly operational airports in Sikkim, Arunachal Pradesh, besides other works at Silchar, Lilabari, Rupsi, Agartala, Dimapur, Shillong and Tura.

11- 19 new waterways have been declared as National Waterways. For the first time, Meghalaya, Tripura & Mizoram entered the rail map of India, 70 years after independence!

12-  Across the Northeast, the government has converted more than 900 km of tracks to broad gauge. It has also launched a Rajdhani Express and the Tripura Sundari Express between Agartala and Delhi.

13-  The Dhansiri-Kohima railway track, connecting Kohima to the national railway network is progressing swiftly. The Agartala-Akhaura railway line will transform the trade ecosystem of the region. With access to ports through Bangladesh, a new wave of economic growth will be unleashed.

14- The National Highway Infrastructure Development Corporation Ltd. (NHIDCL) was set up in July 2014. It maintains and upgrades NH and strategic roads in parts of the country which share international boundaries.

15-  NHIDCL is working on more than 100 road connectivity projects, costing more than Rs. 80,000 crore. The North-East Road Sector Development Scheme was launched in 2015 for rehabilitation and upgradation of important but neglected inter-state roads.

17- Investment of more than Rs 30,000 crore is set aside for development of National Highways under Bharatmala in the Northeast.

19- In a one-of-its-kind initiative, 100% financial support is being provided for Central government projects implemented in the Northeast instead of the previous practice of sharing 90% of the cost.

20- The government has also ensured the fast-paced implementation of the 1,360-km long India-Myanmar-Thailand trilateral highway. This will enhance regional trade and tourism, and significantly contribute to establishing the Northeast as a launchpad for India’s Act East policy.

All these projects that have been completed in the last five years are testimony to the neglect north east faced since independence. It is the reason for its alienation from the national mainstream which is no more a case as seen from a number of connectivity projects being planned, initiated and finished in record time.