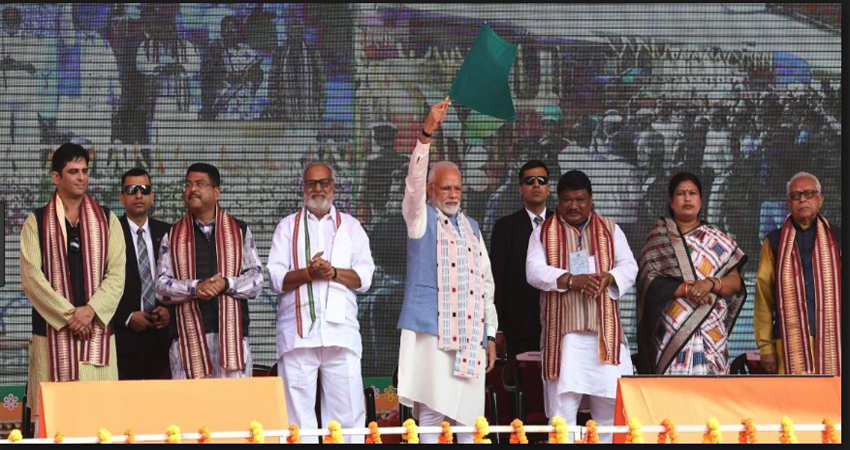 The Prime Minister arrived at the Swami Vivekanand Airport in Raipur this morning and then left for Balangir. In Balangir, he dedicated Multi-Modal Logistics Park (MMLP) Jharsuguda to the Nation. The MMLP will make Jharsuguda the prime hub of logistics in the region. Giving a boost to rail projects, Mr. Modi inaugurated the Balangir-Bichhupali railway line built at an estimated cost of Rs. 115 crore.

In a reflection of his commitment towards the people of Odisha, the Prime Minister said that it was his third visit to Odisha over the past three weeks. Addressing a gathering at the Railway Yard in Balangir, he said that the “Government is making continuous efforts for the development of Eastern India and Odisha. Launch of a series of development projects at Balangir is a step in this direction.”

The PM also dedicated to the nation, the new bridge over Nagavali River, Doubling of Railway Lines between Barpali-Dungaripali and Balangir-Deogaon and Electrification of 813 km of Jharsuguda-Vizinagaram and Sambalpur-Angul lines. The Prime Minister laid the foundation stone of Kendriya Vidyalaya in Odisha’s Sonepur at an estimated cost of Rs.15.81 crore.

Highlighting the importance of connectivity and education, he said, “Education leads to human resource development. But, it is connectivity that transforms such resources into opportunity. Inauguration of 6 railway projects is an effort of our endeavour to enhance connectivity. It will facilitate movement of people, make mineral resources more accessible to industry and help farmers to take their produce to far-off markets, furthering ‘Ease of Living’ for Odisha’s citizens”.

Citing his commitment for the preservation of culture and heritage, the Prime Minister said that it will strengthen our cultural links and enhance the tourism potential in the state. He expressed his happiness over the renovation and restoration works at the Nilamadhav and Siddheswar temples in Gandhaharadi (Boudh). Mr. Modi also inaugurated restoration and renovation work of Ranipur Jharial group of monuments in Balangir & Asurgarh Fort in Kalahandi.