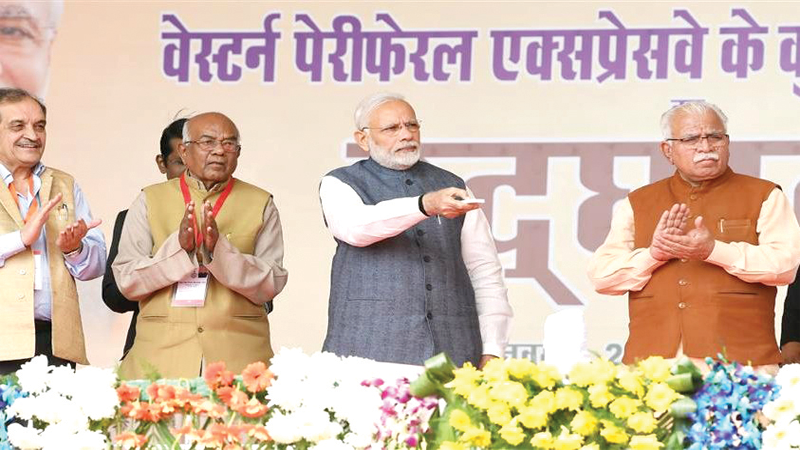 Addressing a huge gathering, Prime Minister said that the Expressway and metro connectivity will usher in a transportation revolution in Haryana. He said that the youth of the region would benefit immensely from the Shri Vishwakarma Skill University.

The Prime Minister said that the Union Government had ensured that KMP Expressway project was finished on priority. He said that the Expressway would play a major role in reducing the pollution in Delhi and surrounding areas. He added that it will bring in ‘Ease of Living’, along with environment friendly travelling.

Stressing on the importance of transport connectivity, Prime Minister said that it is a medium for prosperity, empowerment and accessibility. He added that the ecosystem of highways, metros and waterways that are being built, will create employment opportunities, especially inmanufacturing, construction and service sectors. He mentioned that 27 kilometres of highway are being built everyday at present, compared to 12 kilometres per day in 2014.He added that this shows the vision and will of the Union Government to transform India.

PM Shri Modi said that the Government is committed towards fulfilling the aspirations of youth of the country. He expressed hope that ShriVishwakarma Skill University will play a major role in skilling the youth to take up new opportunities.

The Prime Minister appreciated the efforts of State Government of Haryana in successfully implementing the vision of the Union Government. He also applauded the contributions of the youth of Haryana to the nation, especially in the field of sports.

–The expressway stretches from Kundli to Manesar — connecting Haryana — a lesser number of trucks will now cross the national capital. This indeed will reduce the traffic and pollution in Delhi.

–The length of the stretch from Kundli to Manesar is over 83 km. This stretch would have 14 major or minor bridges, 56 underpass or agricultural vehicular underpasses, seven intersections and seven toll plazas.

–Apart from other amenities, road safety has been given special preference. An ambulance, a crane and a police patrol vehicle will be stationed at a distance of every 20 km for the travellers.