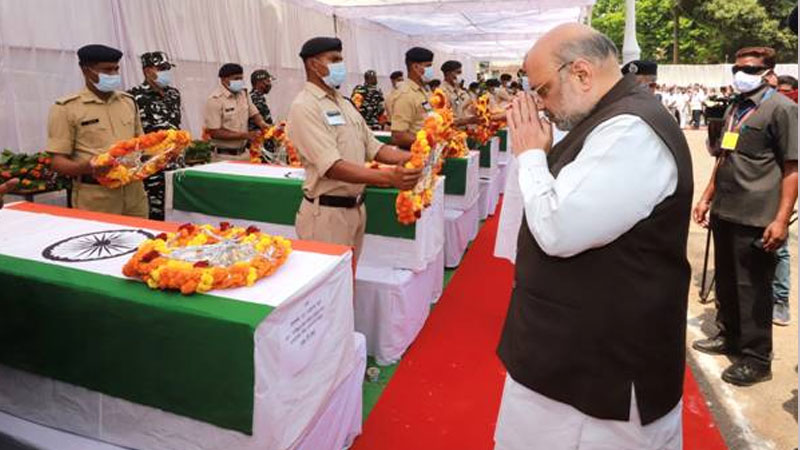 Union Home Minister Shri Amit Shah on April 5 paid tributes at Jagdalpur to the brave security personnels who were martyred in Chhattisgarh while fighting the Naxalites. Saluting the martyred security personnels, Shri Amit Shah said that the country will never forget your valour and sacrifice. The whole country stands with the bereaved families. The Union Home Minister also said that we are committed to take this fight to its conclusion.

The Union Home Minister chaired a high-level meeting with Chhattisgarh Chief Minister and senior officers in Jagdalpur to review the Left Wing Extremism (LWE) situation in the wake of the Naxal attack on security personnel on 3rd April. Addressing the media after the meeting, Shri Amit Shah said that on behalf of the Prime Minister Shri Narendra Modi, Government of India and the entire nation, I pay tributes to the soldiers, Chhattisgarh Police, CRPF and Cobra Battalion who have been martyred. Shri Shah said that this supreme sacrifice of the brave security personnel will not go in vain and the country will always remember their supreme sacrifice.

Shri Shah said that it is the priority of the Modi Government to take this fight against Naxalites to its logical end. In the last few years, the fight against the Naxalites has reached a decisive turn and this unfortunate incident has further enhanced our resolve.

The Union Home Minister said the pace of the fight against the Naxalites should not be slowed down in any way.

The Union Home Minister said that he wants to assure the country that this fight will not stop but will move ahead with more pace. We will take it to the end and at the end of this fight our victory against the Naxalites is certain.