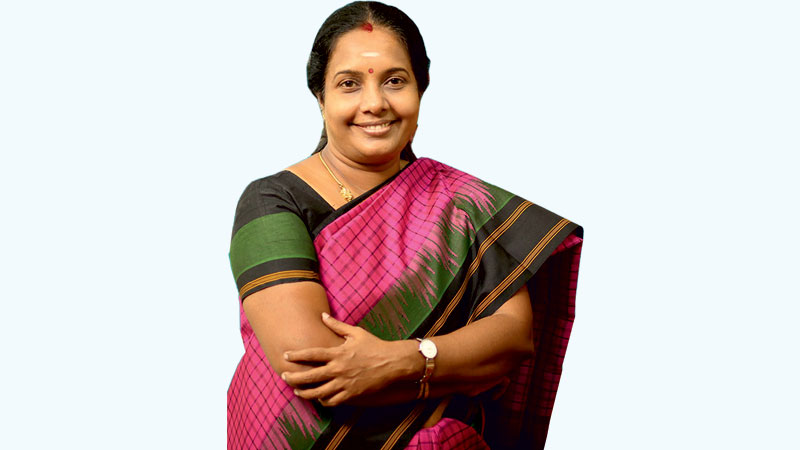 BJP National Mahila Morcha President and member of Tamil Nadu Legislative Assembly from Coimbatore South, Smt. Vanathi Srinivasan represents the energetic woman leadership of the Party. Belonging to a very humble agricultural family Smt. Srinivasan started her political career in the ABVP at the age of 17. She handled many responsibilities in Tamil Nadu BJP as its state secretary, general secretary and vice-president, before assuming the charge of National Mahila Morcha President of the Party. Known for her straight forwardness and organizational skills, she has defeated a popular film actor by registering a significant victory in the recently held Assembly elections in Tamil Nadu.

In an exclusive interview with Kamal Sandesh Associate Editors Ram Prasad Tripathy & Sanjeev Kumar Sinha, Smt. Srinivasan discussed at length about the unprecedented focus of Modi government for women empowerment. She also highlighted the ongoing organizational works and future strategies of the Mahila Morcha to ensure the reach of diverse welfare schemes of Modi government aimed at empowering women living in the nook and corner of the country. Excerpts;

At the outset, let me congratulate you for your significant victory in Tamil Nadu assembly elections.

From ‘Beti Bachao Beti Padhao’ to the induction of maximum women ministers, the union government led by PM Shri Narendra Modi has done remarkable work for gender justice and women empowerment. As a woman, how do you view these developments?

Thanks for your greetings.

So far as various steps for the welfare of ‘Nari Shakti’ is concerned, I think the BJP government at the Centre under the leadership of PM Shri Narendra Modi understands the pain and challenges faced by the daughters of the country and is determined to resolve them in a time bound manner. It is also committed to empowering women by giving them their rights.

Furthermore, BJP is the only national party in the country that is providing 33 per cent reservation to women in the party. The party is not only giving women a chance to contest elections but is also ensuring their representation at every level of government, from panchayat to parliament, including in the union council of ministers, thereby allowing women representation in the highest decision making body of the government.

I agree with you that from ‘Beti Bachao Beti Padhao’ to ‘Sukanya Samriddhi Yojana’, from providing maternity leave to induction of maximum women in the Union Cabinet, BJP led government has led by examples for the welfare of women at large. No other government has given women as much respect and representation in governance as the Modi government has done. As a woman I feel proud of being a part of the organisation and I must say, we are currently witnessing the golden era of women empowerment in the recent history of India under PM Shri Modi.

For a country to be empowered, the empowerment of women is extremely vital. Seen in this context, how significant is the recent induction of more women in the Union cabinet?

Prime Minister Shri Modi has been emphasizing this fact from the beginning that for a country to be empowered, the empowerment of women is extremely vital. Therefore, in the last seven years the PM has ensured that women are given ample recognition, and equal and plentiful opportunities.

This is probably the first time in post-independent India where the Prime Minister included seven more women ministers, taking their overall strength to 11. This transition shows that India is transforming from women development to ‘women-led development’ under the dynamic leadership of the Prime Minister.

These ministers are from across the nation and represent all sections and strata of the society. And under them, women centric issues and policies are bound to get priority like never before.

Modi Govt has executed a number of welfare schemes for the betterment of female population of our country. How the BJP Mahila Morcha plans to take this message to the grassroot and ensure expeditious implementation of welfare schemes ?

Likewise, Awas Yojna, women are the major beneficiary and property rights in their name empower women. The way our Prime Minister has encouraged daughters to achieve their rightful place in every field is truly unprecedented and commendable. BJP Mahila Morcha is creating awareness among the women to take the benefits of these welfare schemes and in coming days we are trying to reach every beneficiaries house.

How significant is the Jammu and Kashmir Union Territory’s new Domicile Policy for the women?


The old Permanent Resident rule was discriminatory against the women of Jammu & Kashmir as it disqualified them from the State subject’s rights if they married a non-permanent resident. But the new Domicile Policy has delivered justice to the women of the state by giving them freedom of marriage and to retain their Domicile, as also to exercise their rights of equal participation in society. Their spouses are also entitled to get the benefits under the domicile policy.

When a girl is losing her citizenship and property right only for choosing a life partner outside the state boundaries, no political party except the BJP dared to question this discriminatory practice. The BJP Mahila Morcha wholeheartedly thanked the Prime Minister for the historic decision that will benefit scores of women of Jammu and Kashmir with Domicile Rights that were denied to them for decades.

BJP launched the ‘Seva Hi Sangathan’ during the height of Covid-19 pandemic. How the Mahila Morcha contributed to this cause?

During the second wave of Corona Pandemic lakhs of women Karyakartas of the party came out of their houses to serve the needy by distributing food, essentials and donating blood under the ‘Seva Hi Sangathan’ launched by BJP National President Shri JP Nadda. As per reports available from 22 States, 55,58,294 Masks, 46,86,686 Food packets, 47,88,522 Ration packets, 3,76,498 Sanitary pads/Sanitizers were distributed, and 11,645 Mahila Morcha Karyakartas donated Blood to the needy.

After you assumed charge, what would you count as the major achievements of BJP Mahila Morcha?

Secondly, we are building an organizational Network from Panchayat to Parliament for the smooth redressal of women centric issues and implementation of various welfare schemes.

Thirdly, we are trying to touch those women “Sarva Sparshi” who are outside the ambit of BJP. We will honour and felicitate the women representatives in every state. We would like to connect to them because they are in important positions in disseminating and circulating our PM’s schemes.

In the run up to the celebration of 75th Independence day of India, Amrut Mohostav, we plan to organize a programme each in the birthplace/memorials of 75 women freedom fighters. And on that occasion we will bring out a book on these unsung women leaders who took part in the freedom struggle of India.