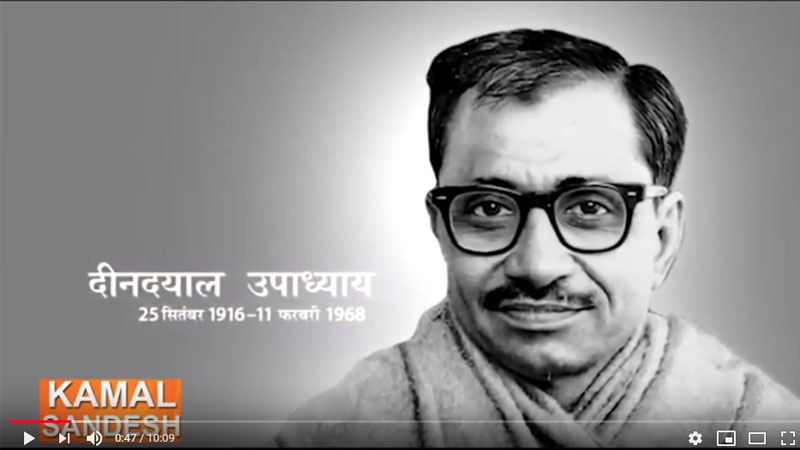 The British exploited the country economically to such an extent that it left India a financial wreck. A great chunk of India’s population went below the poverty line. The English had contrived to sap the economic sources of the country. In these circumstances and the course of events that unfolded, the Bhartiya Jana Sangh came into being on October 21, 1951. Dr Syama Prasad Mookerjee became its first President and Pandit Deendayal Upadhyaya its General Secretary. The era of Pandit Upadhyayaji commenced mainly from this date. It will be no exaggeration if we consider this great man as an “avatar”. He understood the Indian way of life very correctly and presented an ideology best suited to Indian’s reconstruction. He came out with his philosophy of “integral humanism”. He presented a treatise on “Purusharthchatushtya”. Along with other elements of established life, he laid stress on Antyodaya. Enunciating his principles for national administrative system he laid stress on attending to the needs of the persons standing on the lowest rung of the ladder of development and to apply the healing touch by putting balm on the cracks of his feet. That is the cardinal principle of Antyodaya which the country has obtained from him.

The nature of India is based on this philosophy and as long as it will continue to be the guiding principle of our thinking, behaviour and conduct, welfare and upliftment for our people is assured. When this basic principles gets ignored, degradation is bound to set in. Upadhyayaji had laid stress on this thought and he dedicated all his life for the achievement of this objective. When we try to analyse the definition of integral humanism in conjunction with “Purusharthchatushtya”, we will be able to appreciate the efficacy of the Antyodaya era in right perspective. Several incidents of his life inspire us to work in this direction.