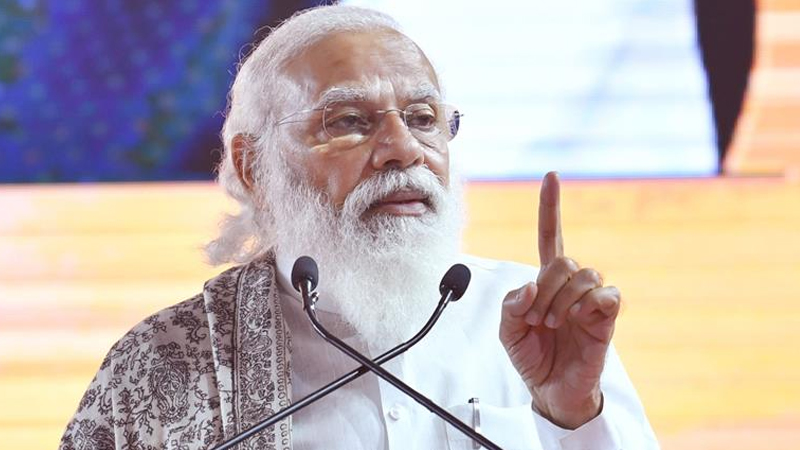 PM Shri Narendra Modi on 10 February, 2021 replied to the motion of thanks on the President’s address to Parliament, in the Lok Sabha. He said, the speech by Rashtrapati Ji showcased India’s ‘Sankalp Shakti.’ His words have boosted the spirit of confidence among the people of India. PM Shri Modi thanked the members of the House for participating in the motion of thanks discussion. Excerpts;

Tracing the historical trajectory of the world order after the World Wars, the Prime Minister pointed out that the post-COVID world is turning out to be very different. In such times, remaining isolated from the global trends will be counter-productive. That is why, India is working towards building an Aatmanirbhar Bharat, which seeks to further global good. He said, India becoming stronger and Aatmanirbhar is good for the world. “Our doctors, nurses, COVID warriors, Safai Karamcharis, those who drove ambulances…such people and so many others became manifestations of the divine who strengthened India’s fight against the global pandemic”, said the Prime Minister.

The Prime Minister pointed out that during the pandemic, government could help the affected people through direct benefit transfer of 2 lakh crore rupees directly in their accounts. Our Jan-Dhan-Aadhar-Mobile (JAM) Trinity made a positive difference in people’s lives. It helped the poorest of the poor, the marginalised and the downtrodden. He said that reforms continued during the pandemic also and this is creating new momentum in our economy and there is hope of double digit growth.

On the Farmer Protests

On the Farmer protests the Prime Minister said, this House, the Government and we all respect the farmers who are voicing their views on the farm bills. This is the reason why topmost Ministers of the Government are constantly talking to them. There is great respect for the farmers. After the Laws relating to agriculture were passed by Parliament – no Mandi has shut. Likewise, MSP has remained.

Procurement on MSP has remained. The Budget has proposed to strengthen the mandis. These facts can’t be ignored. Shri Modi stressed those who are disrupting the House are doing so as per a well-planned strategy. They are unable to digest that people are seeing through the truth. Through their games, the trust of the people can never be won. He countered the argument that why is government pushing a reform which has not been asked for.

Agriculture is part of the society and culture and our festivities and all occasions are connected with sowing and harvesting. More than 80 per cent of our population cannot be ignored, small farmers cannot be ignored. Fragmentation of land holding is leading to a worrisome situation where farmers are not getting viable returns from their fields, investment in agriculture is suffering. Steps are required for small farmers. Therefore we need to work for making our farmers Aatmnirbhar and give him freedom to sell his harvest and infuse diversity in crops. He stressed that investment in agriculture will lead to more employment. We need to provide our farmers a level playing field, modern technology and instil confidence in them. This will require positive thinking as old ways and parameters will not work, the Prime Minister said.

Shri Modi asserted that the public sector is essential but at the same time the role of the private sector is also vital. The Prime Minister criticized the violence in the kisan andolan. “I consider the Kisan Andolan to be Pavitra. But, when Andolanjeevis hijack Pavitra Andolans, showcase photos of those jailed for serious offences, does it serve any purpose? Not allowing toll plazas to work, destroying telecom towers- does it serve a Pavitra Andolan” asked the Prime Minister. It is important to differentiate between ‘andolankari’ and ‘andolanjivi’.