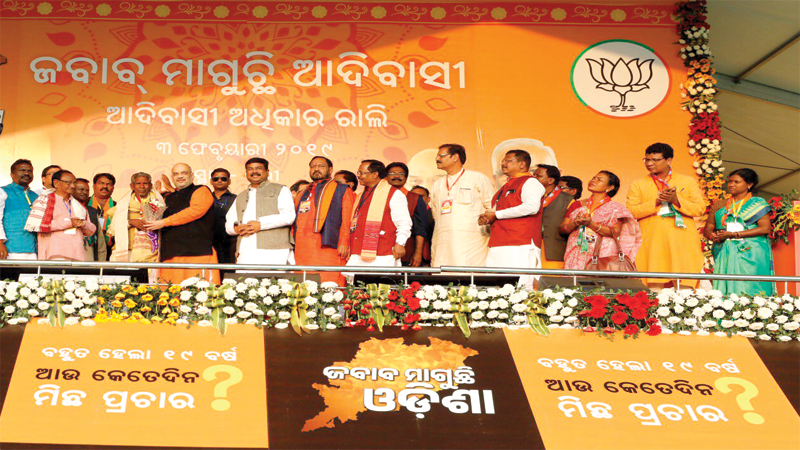 Speaking to the delegates and later to the common public in a rally Shri Shah said, “If we look at tribals in the country, the condition of the ST community in Odisha is the worst which is evident from the incidence of Dana Majhi. If a Government cannot make sure that a tribal woman’s body is transported for her last rites then it has no right to stay in power.”

“Arunachal (Pradesh) and Assam have tribal chief ministers because of the BJP. Shri Jual Oram, a leader from Odisha, is the Union Minister for Tribal Affairs. This ministry was created for the first time in Prime Minister Shri Atal Bihari Vajpayee’s government,” Shri Shah said.

He said, “In Rahul Baba’s and Sonia-Manmohan Sarkar, the highest budgetary allocation for tribal affairs was Rs 30,700 crore. In Narendra Modi’s budget, presented by Piyush Goyal, Rs. 50,000 crore was allocated for tribal development,” he said. The Modi government also assigned minimum support price (MSP) for 49 forest products compared to MSP for only six such items during the UPA tenure, he said. Many tribal communities in the country depend on sale of forest products as their source of income. The BJP government has done enormous developments for the welfare of tribal populations in the country, he added.
Giving the example of the Dana Majhi case, the BJP President said Odisha Chief Minister Naveen Patnaik should be ashamed of the condition of tribals in the state. In 2016, Majhi, a tribal farmer from Kalahandi district, made national headlines when photographed carrying his dead wife on his shoulders. “Such governments have no right to stay in power,” he said, referring to the incident.

He criticized CM Patnaik for lack of fluency in Odiya language and appealed to voters to elect an Odiya-speaking chief minister, who he said can understand problems articulated in the language.

Shri Amit Shah also spoke about Prime Minister’s Kisan Samman Nidhi and the Direct Benefit Transfer assistance for farmers, claiming that it will mostly help tribals who make up small and marginal farmers in the country. He said that under Congress, DBT meant “dealer-broker transfer”.

The BJP National President said, “Odisha is rich with natural resources, but tribal youths are migrating to other States because it is being ruled by a Chief Minister who has no idea about their plight since he does not know speaking Odia.” He alleged the BJD is not concerned about providing better healthcare to people. The Naveen Patnaik Government did not implement the Centre’s Ayushman Bharat scheme fearing to lose votes in the elections, he added.

The BJP National President came down heavily on the State’s BJD Government by comparing it with a “fused transformer” and urged the people to throw it out in the coming elections.