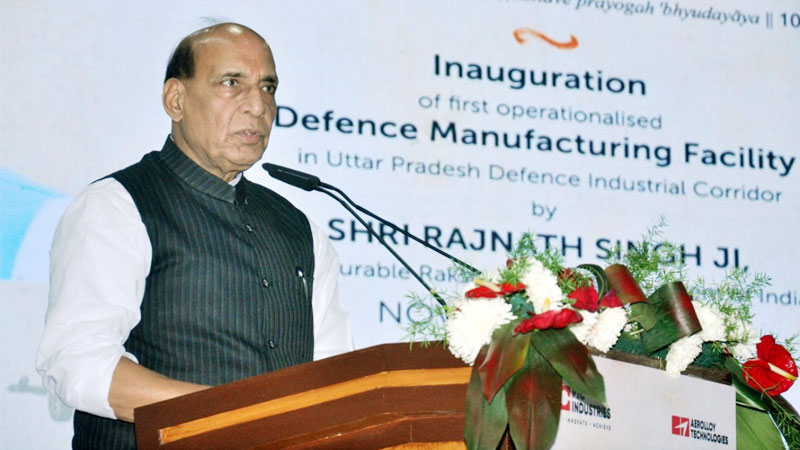 The Raksha Mantri also laid the foundation stone for an integrated Metal Manufacturing Facility under PTC industries that will produce key Raw Materials in Titanium and other Exotic Alloys for aerospace applications. This plant will significantly reduce the country’s dependence on imports for all platforms which require Titanium and Nickel Super Alloys and help in building a strong and Atmanirbhar Bharat.

Shri Rajnath Singh applauded PTC Industries Limited as an example of how in today’s competitive environment a company can be successful through adoption of technology and said that the two units will prove to be major milestones in the path of self-reliance in defence in the times to come. He added that UPDIC and the units are a result of the vision of Prime Minister Narendra Modi for an ‘Aatmanirbhar Bharat’. He appreciated the fact that PTC supplies products to renowned companies in India and abroad, contributing to the Government’s vision of transforming India into a net defence exporter. On PTC obtaining the clearance certificate of critical On-line Fittings (OLFs) for defence applications from Ministry of Defence recently, Shri Rajnath Singh said, the clearance will prove to be a big step in ‘Make in India’ and achieving self-reliance in defence manufacturing.

Reaffirming the Government’s resolve of ‘Make in India and Make for the World’, Shri Rajnath Singh listed out a series of measures undertaken to achieve self reliance in defence, including earmarking around 64 per cent of its modernisation funds under capital acquisition budget for 2021-22 for procurement from domestic companies; notifying two positive lists of over 200 items to increase exports and Defence Acquisition Procedure 2020, setting up of Defence Industrial Corridors in UP & Tamil Nadu; free Transfer of Technology of DRDO and Innovation for Defence Excellence (iDEX) initiative.