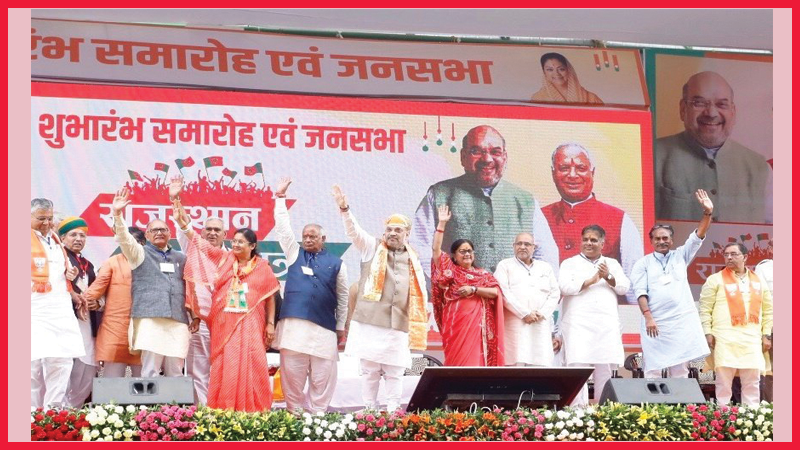 Kicking off BJP’s election campaign in Rajasthan, BJP National President Shri Amit Shah flagged off the ‘Rajasthan Gaurav Yatra’ from the Charbhujanath temple in Rajsamand district on 04 August, 2018. Chief Minister Smt. Vasundhara Raje is embarking on a 58-day Yatra across the state to interact with the electorate ahead of the Assembly election this year. The extensive ‘Gaurav Yatra’ will tour across the state and cover 165 of 200 constituencies. The Yatra is scheduled to end on 30 September in Ajmer.

Before the flagging off of the Yatra Shri Amit Shah and Smt. Vasundhara Raje offered prayers at the Charbhujanath temple and set off to Kankroli where they addressed the first rally.

Speaking at the first public meeting, BJP President Shri Shah said Rahul Baba should go and see the villages where no development had taken place in the 50 years of the Congress rule. However, the situation has changed under the BJP rule and now development works are happening there.

Shri Shah said, “Rahul Gandhi asks us what we did in four years; instead, he should answer questions asked by the people about what they did for the last four generations”.

Further attacking the Congress, he said, “Rahul baba if you know counting then count, I don’t know Italian else I would have told you in Italian how much we have given to public. Modi Government has brought 116 schemes for Rajasthan populace and still Congress asks what has BJP done?”

Talking about the various schemes and programmes of the Rajasthan government, Shri Shah said that the central government brought 116 schemes for people and the Raje government has touched upon all sections of the society in the state and carried out developmental works.

Congress did nothing for development. Rajasthan which has been a glorious state became a BIMARU state because of Congress but now under the leadership of Smt. Raje, the state is progressing and going to become a developed state. We have committed to form the government again, he said.

The BJP President said that the Narendra Modi government released two-and-a-half-times more funds to the state government as compared to the previous UPA government.

Congress President should tell the people whether illegal Bangladeshi should be in India or not. Congress is actually looking at vote bank in this issue but the Modi government does not run on the basis of vote bank, he said.

Shri Shah also said that BJP did not dilute the SC/ST Act and instead the BJP government has strengthened it.

No Congress government have the courage to give account of their work to the public of India but we have the courage always because Bharatiya Janata Party is committed for the betterment of our poor, farmers, Dalits, backward classes, youth and women of the country, he said.

He said Rajasthan is going to reject the Congress once again because it has no direction and its pathetic condition is no longer hidden from the country.

While addressing the rally, CM Smt. Vasundhara Raje said BJP government has worked towards helping women, farmers and youth for the last four years. Targeting the Congress, she said the party has not made false promises to the people.

Smt. Raje said that it was her third Yatra and exuded confidence that the party will secure victory again. “Five years back, I had begun ‘Suraj Sankalp Yatra’ and ‘Parivartan Yatra’ in 2003 from here and people gave us their mandate. We worked hard, I conducted visits and tours of the state to know people’s problems and provided them with what they wanted,” Smt. Raje said.
She said that the government launched programmes and worked to enhance the dignity of women by launching schemes such as Bhamashah scheme and others.

She said Congress always tried to create rift among castes but we want to take every section along with us. It is our aim to launch public welfare schemes and transfer the benefit to people. Development works have taken place in last four years in every panchayat and district.

She said that the state is no more a BIMARU state. In the coming years, she said, industries will be set up, development will pick up pace for a progressive Rajasthan.

The Chief Minister said there is a need to end ‘One time Congress, one time BJP’ trend to push Rajasthan among fastest developing states. Development took place at fast pace in Madhya Pradesh, Chhattisgarh and Gujarat where the BJP is in power.

She also asked the Congress to give a list of works done by them in the past 50 years. “People should analyze who served the nation best,” she said.