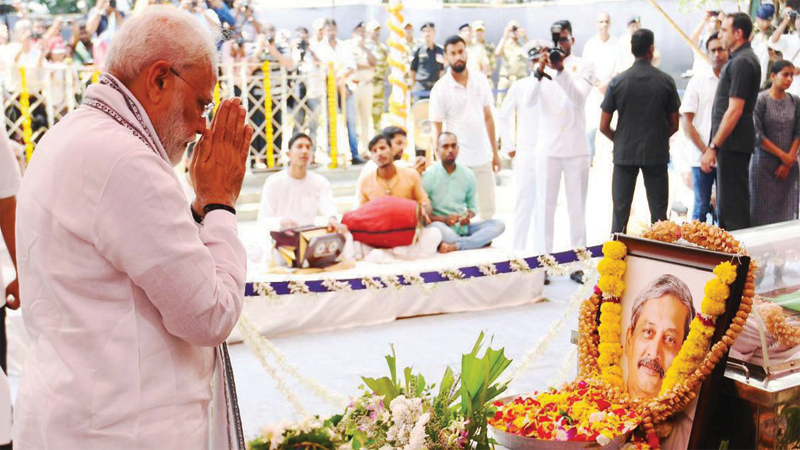 The Prime Minister Shri Narendra Modi and several leaders across the political parties expressed their condolence on the demise of Shri Parrikar.

The Union Cabinet, chaired by the Prime Minister Shri Narendra Modi has condoled the sad demise of Shri Manohar Parrikar and extends its heartfelt condolences to the bereaved family and the people of Goa on behalf of the Government and the entire Nation. The Cabinet observed two minutes silence in the memory of Shri Manohar Parrikar.

The Cabinet also approved observing one day of mourning by the Government of India and flying the National Flag at half-mast on 18th March, 2019 in all the States/UTs Capitals including Delhi and throughout State of Goa.

The Union Cabinet further approved following condolence Resolution in the profound memory of Shri Manohar Parrikar: “The Cabinet expresses profound sorrow at the sad demise of Shri Manohar Parrikar, Chief Minister of Goa in the evening of 17th March, 2019 at Panaji, Goa. In his passing away, the country has lost a veteran and distinguished leader, affectionately called as the Chief Minister of commoners.

Born on December 13, 1955 at Mapusa, Goa, Shri Parrikar was educated at Loyola School, Margao and later graduated in Metallurgical Engineering from the Indian Institute of Technology, Mumbai in 1978. Before entering politics, Shri Parrikar had joined the Rashtriya Swayamsevak Sangh (RSS) at a young age and became a Mukhya Shikshak (Chief Instructor) in the final years of his schooling itself. After graduating from IIT, he resumed RSS work in Mapusa and became a Sanghchalak at the age of 26.

Shri Parrikar will be remembered for his simplicity and his abilities as an exceptional administrator. His contribution to the building of modern Goa and to the modernization of India’s Armed Forces as well as improvement to the lives of Ex.-Servicemen will never be forgotten.

Shri Parrikar was awarded the ‘Distinguished Alumnus Award’ by IIT Mumbai in 2001, Honorary Doctorate by National Institute of Technology, Goa in 2018 and the Dr. S.P. Mukherjee Award in 2018, among others. He is survived by his two sons.

Parrikar was the builder of modern Goa, an unparalleled leader and a true patriot: Narendra Modi

The Prime Minister, Shri Narendra Modi condoled the passing away of the Chief Minister of Goa, Shri Manohar Parrikar.
The Prime Minister said, “Shri Manohar Parrikar was an unparalleled leader. A true patriot and exceptional administrator, he was admired by all. His impeccable service to the nation will be remembered by generations. Deeply saddened by his demise, Condolences to his family and supporters”. Om Shanti.

He said Shri Manohar Parrikar was the builder of modern Goa. Thanks to his affable personality and accessible nature, he remained the preferred leader of the state for years. His pro-people policies ensured Goa scales remarkable heights of progress.
The PM further said, “India will be eternally grateful to Shri Manohar Parrikar for his tenure as our Defence Minister. When he was Defence Minister, India witnessed a series of decisions that enhanced India’s security capacities, boosted indigenous defence production and bettered the lives of ex-servicemen”.

BJP National President Shri Amit Shah expressed his condolence on the leader demise in a series of tweets. He said “Manohar Parrikarji’s demise is extremely painful. In him, the nation has lost a true patriot who selflessly dedicated his entire life to the country and ideology. Parrikar ji’s commitment towards his people and duties was exemplary.”

“Parrikar ji has shown the entire nation how a BJP Karyakarta, even during his toughest time, is committed to the philosophy of Nation First, Party Next and Self Last. He will always be remembered for his contributions as India’s Defence Minister and as CM of Goa.”

“Entire BJP stands firmly with Parrikar ji’s family. I along with millions of BJP Karyakartas and importantly the people of Goa, who were his family, express my deepest condolences. May God give the bereaved family strength to withstand this tragic loss. Om Shanti..Shanti Shanti..”

Manohar Parrikar was a fighter on all fronts: L.K. Advani

“I am extremely sad to learn about the demise of Shri Manohar Parrikar. He had been bravely fighting his illness for some time. I had the opportunity to meet him at Goa in the month of January this year. Despite his illness, he was quite bold to sit up, attend to office work and also interact with everyone. Manohar Parrikar was a fighter on all fronts and was also instrumental in forming the first BJP Government in Goa.”

A man of few words, he believed in accomplishing his tasks with utmost dedication. I pay my condolences to all the members of his family. May his soul rest in peace.

He was known for his honesty, integrity and simplicity: Rajnath Singh

Union Home Minister Shri Rajnath Singh expressed his condolence over the sad demise of Goa Chief Minister Manohar Parrikar. “Deeply saddened and pained by the demise of my dear friend & Chief Minister of Goa, Shri Manohar Parrikar. He was known for his honesty, integrity and simplicity”, Shri Singh tweeted. He served the nation and the state of Goa with great diligence. My heartfelt condolences to his bereaved family, the Home Minister added in the twitter message.

He always led by example in his public life & loved by masses: Arun Jaitley

Union Finance Minister Shri Arun Jaitley said, “Saddened to know about the demise of senior BJP leader Shri Manohar Parrikar ji, Chief Minister of Goa. He always led by example in his public life and was loved by masses. He will be missed by every one of us. May God render peace to the departed soul, Om Shanti… ॐ शान्ति”

BJP has faced a huge loss with the demise of Parrikar Ji : Nitin Gadkari

Defence Minister Smt. Nirmala Sitharaman said Shri Manohar Parrikar is no more. A sincere, honest & sensitive political activist was simple and down to earth, I learnt a lot from Shri Parrikar. As Raksha Mantri his contribution to making the armed forces a modernised, lean & mean fighting machine will remain unparalleled.

Human Resources Minister Shri Prakash Javadekar said he was an epitome of idealism in public life. “He had a vision for Goa and the country and worked on mission mode to accomplish it in whichever responsibility he was given. We have lost an ideal leader, with whom I had worked since he entered the BJP. My heartfelt condolences to his family and friends and his supporters. Om Shanti,” he tweeted.

Environment Minister Dr. Harsh Vardhan said that with Manohar Parrikar’s death, he lost a close friend and it was a big loss to the nation and the party.

Union Textile Minister Smt. Smriti Irani said, “A leader, a mentor, a friend- Parrikar Sir meant all that & more to my family.

But then every Goan can say the same for that was the persona of Manohar Parrikar. He taught me dignity in the face of adversity, loyalty in tough times & perseverance so that determined goals are met”.

Uttar Pradesh Chief Minister Shri Yogi Adityanath expressing his grief on the demise of Shri Parrikar said, “It is really saddening news. As chief minister of Goa and Defence minister of India, the commendable service has given to the country will always be remembered. He was very humble and a true patriot.”

The last rites of Shri Manohar Parrikar ji were performed with full state honours on 18 March, 2019 evening. In the morning of 18 March Shri Parrikar’s mortal was kept at the BJP head office in Panjim for last Darshan.

Thousands of people thronged the streets of Goa state capital to catch a final glimpse of Chief Minister Shri Manohar Parrikar, as his mortal remains was brought to the BJP office for party workers to pay their last respect. His remains were also taken to Kala Academy, around three km from the BJP office, later on the day to allow the public pay their tribute to him.

The final rites of the late CM Shri Manohar Parrikar were performed at the Miramar beach, next to the memorial of Goa’s first Chief Minister Dayanand Bandodkar.

President of India Ramnath Kovind said, “Extremely sorry to hear of the passing of Shri Manohar Parrikar, Chief Minister of Goa, after an illness borne with fortitude and dignity. An epitome of integrity and dedication in public life, his service to the people of Goa and of India will not be forgotten “.

The Vice President of India, Shri M. Venkaiah Naidu has condoled the passing away of the Chief Minister of Goa, Shri Manohar Parrikar. In a message, the Vice President said that Shri Parrikar was one of the most lovable and honest senior politicians of our country. He was a dynamic and dedicated individual who led life full of values and principles. In his passing, the nation in general and Goa in particular lost its proud son. My heartfelt condolences to members of his bereaved family and I pray for his soul rest in peace.”