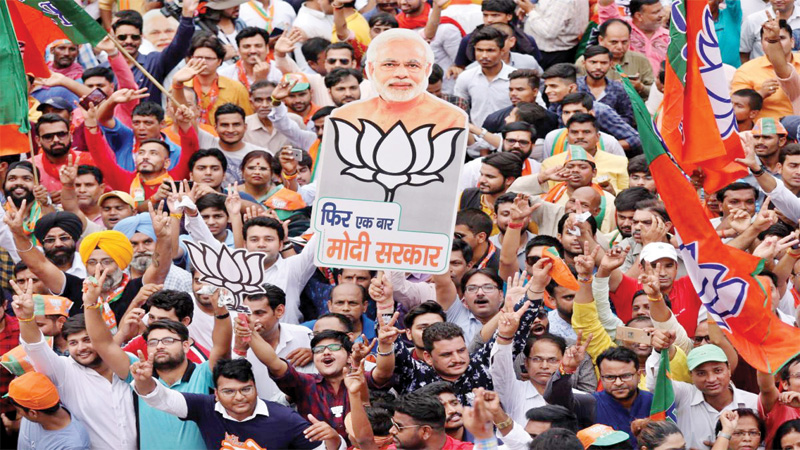 As the numbers flashed for Amethi, a huge cheer went up among the crowd of Bharatiya Janata Party supporters gathered in front of the giant television at the party’s national headquarters in central Delhi. At noon, Rahul Gandhi was trailing Smt. Smriti Irani by about 6,500 votes. “Someone get an oxygen cylinder fast — Rahul baba is about to faint,” quipped a BJP worker, a party flag resting on his shoulders.

It turned out that the jibe wasn’t premature. By evening, Smt. Irani had emerged as a giant killer, defeating the Congress president in his family bastion by over 55,000 votes.

There were scenes of utter jubilation at the BJP’s imposing new headquarters on Deen Dayal Upadhyay Marg. Thousands of supporters thronged the complex to celebrate the huge mandate that the voters had given the party. A part of the crowd spilled on to the street, on the busy arterial roads. They were waving BJP flags, bursting crackers, dancing to drum beats, chanting slogans and giving impromptu bytes to reporters.

Till early evening, hosts of supporters gathered at from the National Capital Region and the neighbouring states. There were lots of women supporters as well — from those dressed in resplendent sarees to younger women wearing T-shirts bearing legends like ‘NaMo Again’ and ‘Main Bhi Chowdikar’.

And in the midst of it all, the presence of the man in whose name this election was fought and won loomed large everywhere. The party office was filled with Shri Narendra Modi’s larger-than-life cutouts and posters. Even children were made to dress up like him.

We are so happy and speechless. We have got more than what we expected. This mandate means that BJP is not only winning in 2019, but also in 2024,” said party supporters, who had come to celebrate all the way from Rajasthan.

By afternoon, the huge, 1.7 lakh square feet BJP headquarters was packed with people. The ground floor and the front courtyard were chock-a-bloc with party workers, journalists and security persons. One by one, the BJP’s national leaders started trooping in. However, when Party President Shri Amit Shah arrived the supporters given him a warm welcome. But the one they were all waiting including the BJP President and leaders were their hero Shri Narendra Modi.

With his arrival the jubilation reached its climax. The cheering, clapping, whistling and chanting of “Modi, Modi, Modi”, reverberated the thrilling atmosphere of BJP headquarters.