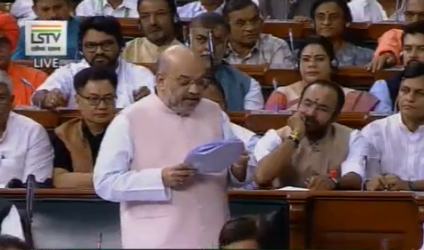 Home Minister Shri Amit Shah today moved a resolution in the Lok Sabha seeking an extension of President rule in Jammu and Kashmir for a further period of six months with effect from 3rd July 2019.

Moving the resolution in the House, Shri Shah said, since the State Assembly has been dissolved and the Election Commission has decided to hold fresh elections in Jammu and Kashmir later this year, it is essential that the President’s Rule be extended for another six months.

He said, the state has seen bloodshed in previous elections, but things have changed and during Lok Sabha election this year, no violence took place. Shri Shah said, the law and order in the state is under control and the government has adopted zero tolerance against terrorism.

He said, the preparation to conduct Assembly elections in the State by the end of this year is underway. He said the Centre is committed to a democratically elected government in the State.

The Minister also moved Jammu and Kashmir Reservation (Amendment) Bill, 2019 in the Lok Sabha for consideration and passage. The bill proposes to give reservation in educational institutions and government jobs to people living within 10 kilometres of the International Border in Jammu. The Bill will replace the Ordinance promulgated in this regard.