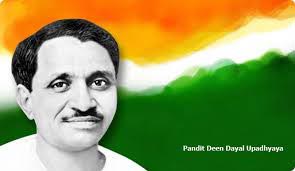 THE MIND is overcast with grief. The skein of this tragic event will be unravelled by those whose business it is to do so. Whatever their enquiries bring to light, the Sangh has lost in Deendayal Upadhyaya a dedicated worker who had started fulfilling the promise of his youth. Now we are deprived of the rich harvest of his versatile genius.

He occupied the foremost place among those few who realize their duty as Swayamsevaks of the Sangh very early in life, and devote their total energies and dedicate their life to the mission of the Sangh. It is expected of a Sangh Swayamsevak that he should develop and keep active all the qualities of a Swayamsevak and remain loyal to the organization ; that he should bear in mind the importance of all the activities of the Sangh and participate in them ; and that he should successfully carry out whatever duties he is asked to perform and in whatever field, as did Deendayalji, who was allocated work in the field of politics. It would not be an exaggeration to say that what is Jana Sangh today is his creation, that its stature in the country is the fruit of his unremitting efforts. To him alone goes the credit of starting from scratch and building up such an imposing organisation from its very foundation up.

He also came to occupy the highest position in the party, although against my will as also his own. I was forced to request him to be president of the party for a short time, say, for about a year, as a stop-gap arrangement. So he agreed, though it was against his grain to seek any position of honour and distinction. He really never wanted this high honour, nor did I wish to burden him with it. But circumstances so contrived that I had to ask him to accept the presidentship. He obeyed like the true Swayamsevak that he was.

As president he brought about a very desirable change in the public mind within a short time. Even the most prominent opponents began to feel that ultimately the political activity that would shape the destiny of the nation was that of the Jana Sangh. Some even began to say that this single individual embodied in himself the strength of the Rashtriya Swayamsevak Sangh that stood behind this party.

The Jana Sangh was born under very difficult circumstances. Its first president, Dr. Shyama Prasad Mukherji, it may be said, was a victim of political murder. Dr. Raghuvira, by great good luck of the Jana Sangh, succeeded him. He was a man of indisputable eminence, who could have lent prestige to the party even in foreign lands. But in a few days he met an untimely death. And now, after him, the presidentship of the versatile Deendayalji has ended in this tragic manner.

I went to Kashi to see his mortal remains. But I did not shed tears. I don’t know what people must have thought about me, but I remembered the old wisdom enshrined in the Sanskrit saying that a man who believes in the holiness of work does not stop to grieve or rejoice, but continues with his work.

By God’s grace I have been able to attain a condi-tion of mind more in harmony with the sentiment of this saying, and I have been able to get over the deep sorrow inherent in this incident. It is not that his place will remain vacant, that no man of his ability can or will be found. We have a tradition of workers who come forward one after the other. No place will remain vacant, no post unmanned.

Let everyone among us make him the ideal for the kind of all-round perfection he had attained. It is not that I ask everyone to enter politics. In fact Deendayalji was the most reluctant politician, and had many times expressed his distress at the kind of work he was being asked to do. He rather preferred his former work of a Sangh Pracharak. I told him that I could see nobody else who would do the work as well as him. It needed his unshakable faith and complete dedication for a man to remain in this mess and yet be untouched by it.

(From condolence speech at Jaunpur)