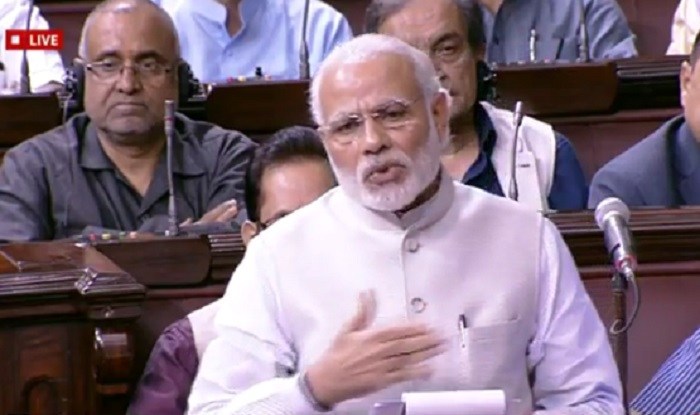 The Prime Minister, Shri Narendra Modi, today replied to the motion of thanks on the President’s address, in Rajya Sabha. He thanked the members of the Upper House for participating and contributing towards the debate. He also paid tributes to the late Rajya Sabha MP Shri Madanlal Saini.

The Prime Minister said that the mandate of the 2019 Lok Sabha elections showcases the desire of the citizens for stability. He added that the trend of electing stable governments is now being seen in various States.

Appreciating the electoral process during the recent Lok Sabha elections, PM said that the scale of the entire process has been immense.  He termed the statement of some of the leaders stating ‘democracy has lost’ as unfortunate. He asked the Members not to question the wisdom of voters.“It is important to respect our electoral process and democracy”, PM added.

The Prime Minister criticized the questions raised on electronic voting machines (EVM). He said that EVMs have brought down the instances of booth capturing and violence.  “Now, the news is about rising turnout. This is a healthy sign for democracy”, PM said. He noted that VVPATs have only strengthened the credibility of electronic voting machines.

Talking about election reforms, PM said reforms are absolutely necessary for strengtheningthe electoral process in India. In this context, he mentioned that it is important to discuss and give inputs on electoral reform proposals like ‘One Nation One Poll’.

The Prime Minister said that the Union Government has strived towards simplifying processes, which can benefit the people of India. He said the government believes in the empowerment of common people. He highlighted the government’s work towards ensuring house, electricity, gas connection, toilet etc. for the citizens of the country.

Shri Modi urged everyone to work towards making India afive trillion dollar economy. He asked all political parties to work with a positive mindset and give suggestions and ideas for attaining this goal.

PM said that he was deeply saddened by the recent incident in Jharkhand. He said that the culprits should get the adequate punishment as per laws of the country. He said it isnot right to defame an entire State,for an incident. He said that perpetrators of violence should be dealt with sternly, and all such incidents should be treated as per law, in the same manner, regardless of the State in which they occur.

The Prime Minister said that the need of the hour is to strengthen Ayushman Bharat. “We want our poor to get top quality and affordable treatment”, PM added

The Prime Minister said that there has been a strong focus on the development ofNorth Eastern States as well as aspirational districts.

On Cooperative federalism, PM said that it is important to have ‘national ambition with regional aspirations’.

The Prime Minister urged the citizens to do whatever they can, to make the nation better and stronger. He asked everyone to work together towards taking India to new heights and creating a New India.