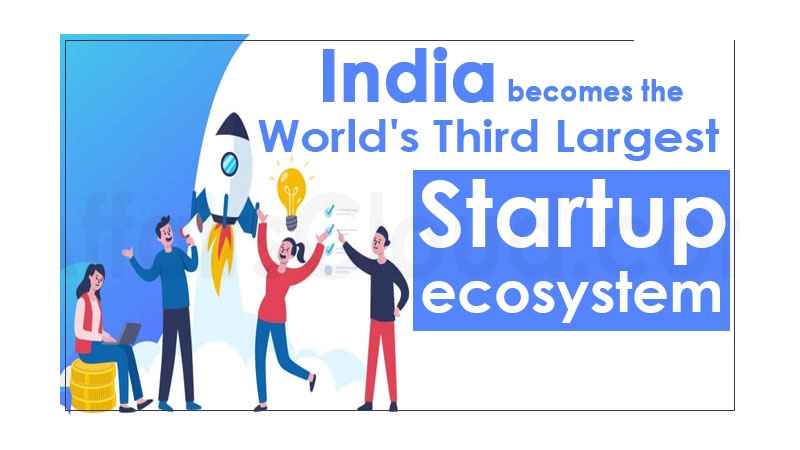 The dedicated efforts of Modi government have brought India among top 3 countries which have largest startup ecosystems in the world.

The Union Government led by Prime Minister Shri Narendra Modi in the month of January 2016 launched ‘Startup India Initiative’ with aim and vision to support entrepreneurs, build a robust startup ecosystem and transform India into a country from job seekers to job creators. Earlier, the mechanism that prevailed was complex and not streamlined which discouraged several small and medium entrepreneurs to float a startup.

The government started encouraging entrepreneurship through implementation of clear compliances, easier exit process for failed startups, fast tracking of patent applications, a dedicated website to reduce information asymmetry, exemptions on Income Tax and Capital Gains Tax for eligible startups, a fund of funds to infuse more capital into the startup ecosystem and a credit guarantee scheme. Simultaneously, India’s ranking in ‘Ease of Doing Business’ is continuously improving. The dedicated efforts of Modi government have brought India among top 3 countries which have largest startup ecosystems in the world. According to Unicorn list 2021 published by Hurun Research institute at the end of August, India has become 3rd largest startup ecosystem in the world after US and China.

The term ‘Unicorn’ is used in financial world to describe a privately owned startup company with a valuation exceeding $ 1 billion. In the last one year, India has added three unicorns every month taking the total number of the unicorns to 51, ahead of the UK(32) and Germany(18). With total 396 unicorns, US remains at top and China, with 277 unicorns, is placed 2nd position. Presently, total worth of unicorns in India is at $168 billion. The report stated that India added 25 unicorns in 2021 alone. Apart from unicorns, the Hurun Research institute has prepared a list of future unicorns in India. It categorizes future unicorns in two group- gazelles and cheetahs.

Gazelles are those startups which have potential to become unicorns within two years and cheetahs are those having potential to be unicorns within four years.
The list of future unicorns reveals that 32 future unicorns under “gazelles” category valued over 500 billion dollars can convert into unicorn in two years, while there are 54 comes under “cheetahs” category having valuation over 200 million dollars can achieve the status of unicorn within four years. Online retail store Zilingo is the most valuable Gazelle and online furniture platform Pepperfry is the most valuable Cheetah.

Gaming company Mobile Premier League based in Bengaluru takes the second rank on the Hurun. Mobile Premier League got a total investment of US$230mn from investors such as Sequoia Capital, Moore Strategic Ventures, SIG, Pegasus Tech Ventures, Founders Circle and others. Rebel Foods is India’s first cloud kitchen start-up, ranked third in the Hurun India Future Unicorn List 2021. Cure Fit a Fitness start-up ranked fourth on the Hurun India Future Unicorn List 2021. In June 2021, Tata Digital entered into an agreement to invest up to US$75mn in CureFit backed by global investors such as Temasek, Accel Partners, Epiq Capital, Unilever Swiss and others. Gurugram based E-commerce company Spinny gets the fourth rank on the Hurun India Future Unicorn List 2021. With 900 employees, Spinny currently operates in 9 cities and raised more than US$120mn.

A unique feature has surfaced in Hurun’s research that founder of startups in future unicorn list have graduated and post graduated from either IIT or IIM. The report indicates that India is becoming able to stop brain drain problem to which it has been grappling for long time. The research also states that 11 co-founders are under the age of 30 and 15 above the age of 50.

The average age of founders in the list is 39 years. It means the Government’s startup India initiative is attracting young talents. The report has placed Bengaluru, Delhi NCR and Mumbai among 3 major startup hub cities. With 31 startups, Bengaluru remained first major startup hub city of India followed by Delhi NCR with 18 startups and then Mumbai with 13 startups.

These startups are attracting both domestic and foreign investment. The Modi government’s initiative for making investment friendly climate in the country has increased investors faith in India. The top investors in the Gazelles and Cheetahs are Sequoia, followed by Tiger Global with 37 and 18 investments respectively.