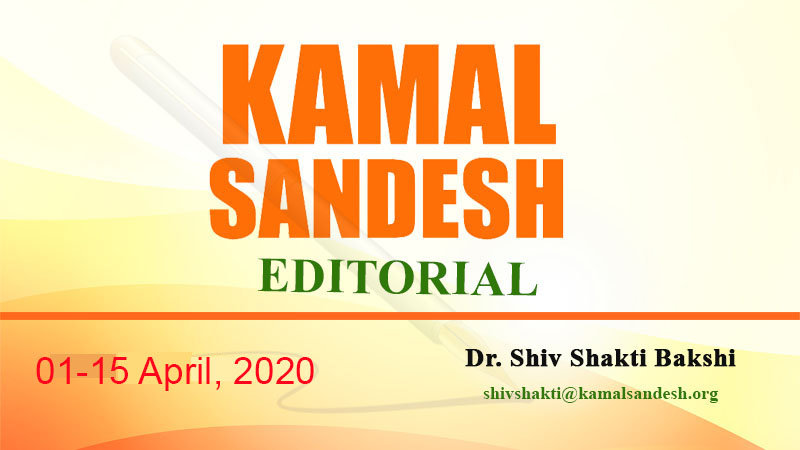 Covid 19 pandemic has emerged as a new challenge to the humankind across the world. The pandemic that started from Wuhan in China has now engulfed most of Europe, US and gulf countries creating one of the severest crises in the recent human history. As many countries are trying to check its spread with lockdowns and by creating awareness about social distancing and other preventive measures, the humankind still struggles to find its cure. In such trying times when the numbers of affected people are rising with every passing day and death counts are piling up, the pandemic appears to the sweeping across the entire globe.

It has created major health crises in even the most developed nations of the world whose health infrastructure are crashing down while being unable to take the load of ever increasing Covid 19 cases in their countries. Many of these countries are facing shortage of test kits, masks, sanitizer and protective gears for the health workers, nurses and doctors, ventilators and other equipments including medicines. As the major economies of the world are forced to shut down the coming months are going to be extremely tough creating very hard time for the global economy. The world is staring at a very difficult phase affecting every aspect of human life.

India is fighting the battle against Covid 19 under the dynamic leadership of Prime Minister Shri Narendra Modi. The people are united in their fight against the pandemic can be understood from the fact that a high level of awareness about the Covid 19 and the threat it poses to humanity is already present in India. It is the result of the efforts made by the Indian government and various agencies that people showed their solidarity in the fight against this pandemic and observed ‘Janata Curfew’ on the appeal of the Prime Minister Shri Narendra Modi. Not only this, the manner in which people responded to the PM’s appeal to clap or clang thalis in a show of gratitude and thankfulness to all those health workers, nurses, doctors, cleanliness staff and police and other staffs who are actively involved in fighting Covid 19 by risking their lives, speaks volumes of India resolve to fight this pandemic. The unprecedented scale of observance of ‘Janata Curfew’ and the expression of solidarity across the entire country, from north to south and from west to east touching even the remote villages gives the hope that India will emerge victorious against the pandemic.

As the Covid 19 cases were set to emerge according to various experts who predicted that India was crossing over to the third stage wherein the threat of community spread was high, the Prime Minister Shri Narendra Modi has rightly announced the lockdown of the entire country for 21 days starting from March 24th night. The country is under lockdown and it is heartening to see that except few cases of non-observance, entire country is united in the fight against the pandemic and appears to be in control of the situation.

The WHO has especially lauded the efforts to the government in containing the pandemic in the country. India, as a huge country having a population of more than 130 million people with diversity as massive as its vastness, the record so far appears amazing for any international observer. The doomsayers, who predicted a Covid 19 nightmare for India, have luckily been so far proven wrong. But the danger of the spread of the pandemic is still haunting the nation so it is the time of high caution.

As the government has already taken all necessary steps to contain it, it is now responsibility of all the individuals, social groups, community leaders and various agencies to ensure that the spread of pandemic is stopped at all cost. BJP National President Shri Jagat Prakash Nadda has given a call to all the karykartas, office bearers and sympathizers to stand by the poor people so that no one is hungry in the time of lock down and also made appeal for donation of at least Rs. 100 in PM Care fund. It is heartening to see that BJP karyakartas are involving themselves actively and keeping the moral of the people high in the fight against this pandemic. As everyone contribute their bit unitedly, there is no doubt that India will win in its battle against Covid 19 pandemic.