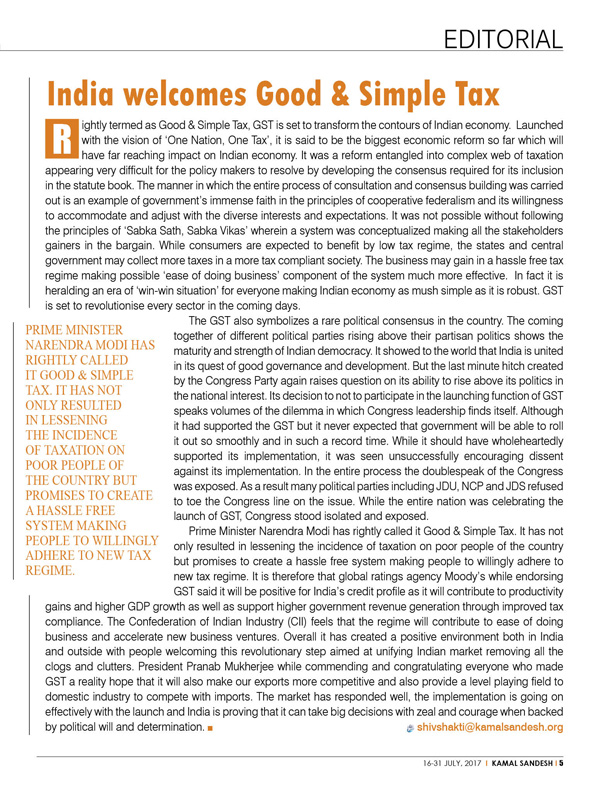 Rightly termed as Good & Simple Tax, GST is set to transform the contours of Indian economy. Launched with the vision of ‘One Nation, One Tax’, it is said to be the biggest economic reform so far which will have far reaching impact on Indian economy. It was a reform entangled into complex web of taxation appearing very difficult for the policy makers to resolve by developing the consensus required for its inclusion in the statute book. The manner in which the entire process of consultation and consensus building was carried out is an example of government’s immense faith in the principles of cooperative federalism and its willingness to accommodate and adjust with the diverse interests and expectations. It was not possible without following the principles of ‘Sabka Sath, Sabka Vikas’ wherein a system was conceptualized making all the stakeholders gainers in the bargain. While consumers are expected to benefit by low tax regime, the states and central government may collect more taxes in a more tax compliant society. The business may gain in a hassle free tax regime making possible ‘ease of doing business’ component of the system much more effective. In fact it is heralding an era of ‘win-win situation’ for everyone making Indian economy as mush simple as it is robust. GST is set to revolutionise every sector in the coming days.

The GST also symbolizes a rare political consensus in the country. The coming together of different political parties rising above their partisan politics shows the maturity and strength of Indian democracy. It showed to the world that India is united in its quest of good governance and development. But the last minute hitch created by the Congress Party again raises question on its ability to rise above its politics in the national interest. Its decision to not to participate in the launching function of GST speaks volumes of the dilemma in which Congress leadership finds itself. Although it had supported the GST but it never expected that government will be able to roll it out so smoothly and in such a record time. While it should have wholeheartedly supported its implementation, it was seen unsuccessfully encouraging dissent against its implementation. In the entire process the doublespeak of the Congress was exposed. As a result many political parties including JDU, NCP and JDS refused to toe the Congress line on the issue. While the entire nation was celebrating the launch of GST, Congress stood isolated and exposed.

Prime Minister Narendra Modi has rightly called it Good & Simple Tax. It has not only resulted in lessening the incidence of taxation on poor people of the country but promises to create a hassle free system making people to willingly adhere to new tax regime. It is therefore that global ratings agency Moody’s while endorsing GST said it will be positive for India’s credit profile as it will contribute to productivity gains and higher GDP growth as well as support higher government revenue generation through improved tax compliance. The Confederation of Indian Industry (CII) feels that the regime will contribute to ease of doing business and accelerate new business ventures. Overall it has created a positive environment both in India and outside with people welcoming this revolutionary step aimed at unifying Indian market removing all the clogs and clutters. President Pranab Mukherjee while commending and congratulating everyone who made GST a reality hope that it will also make our exports more competitive and also provide a level playing field to domestic industry to compete with imports. The market has responded well, the implementation is going on effectively with the launch and India is proving that it can take big decisions with zeal and courage when backed by political will and determination.