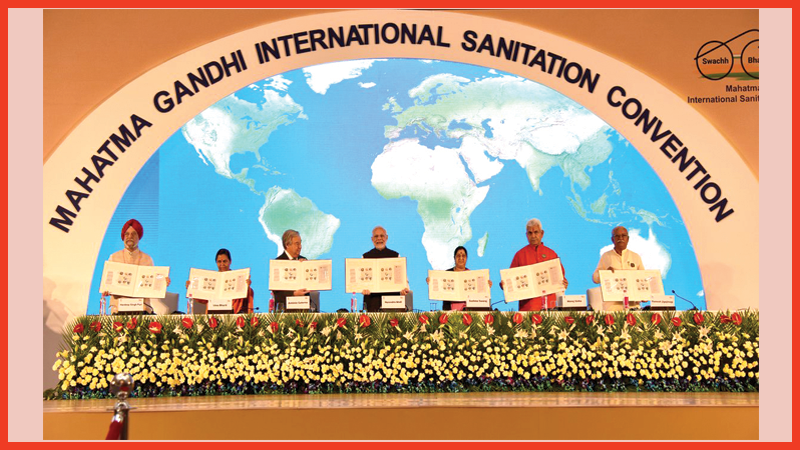 The Prime Minister, Shri Narendra Modi on October 2 addressed the Mahatma Gandhi International Sanitation Convention (MGISC) in New Delhi. MGISC has been a 4-day international conference that has brought together Sanitation Ministers and other leaders in WASH (water, sanitation and hygiene) from around the world. The Prime Minister visited a Digital Exhibition, accompanied by the Secretary General of the United Nations, Mr. Antonio Guterres. From the dais, the dignitaries launched commemorative postage stamps on Mahatma Gandhi, and a medley CD based on Mahatma Gandhi’s favourite hymn – “Vaishnav Jana To.” The Swachh Bharat Awards were also distributed on this occasion.

In his address, the Prime Minister mentioned the emphasis that Mahatma Gandhi placed on cleanliness. He recalled Mahatma Gandhi’s “Constructive Programme”, published in 1945, where rural sanitation was an important subject.

The Prime Minister said that an unclean environment, if not cleaned, leads to a situation where one starts accepting circumstances. On the contrary, if one cleans up dirt in the surroundings, he gets energized, and then does not resign himself to existing adverse circumstances.

More than 5 lakh villages are now ODF, he added. He expressed satisfaction at the changing lifestyle of people in India, following Swachh Bharat Mission. He said India is on track to achieve the Sustainable Development Goals. He highlighted the importance of the “4 Ps” in making the world clean: Political Leadership, Public Funding, Partnerships, and People’s participation.